Redskins Once Again Win the Off-Season

But can Robert Griffin turn things around? 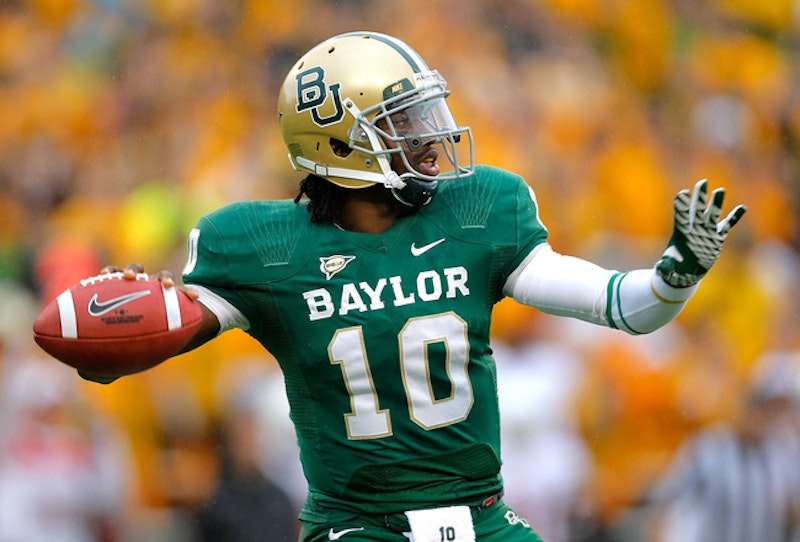 The Washington Redskins made a bold move to reshape the franchise on Friday night when they agreed to send three #1 picks and a second round pick to the St. Louis Rams for the #2 overall selection in April’s draft. It’s pretty safe to assume that Washington will use the pick to select Baylor quarterback and Heisman Trophy winner Robert Griffin III.

Griffin has rocketed up draft boards over the past year due to several factors. First, he’s damn impressive: an accurate passer and fast. He put up huge numbers at Baylor and locked up the Heisman with a dazzling performance in an upset of Oklahoma. Griffin has also likely benefited from the early NFL success of 2010 Heisman winner Cam Newton. As Newton was lighting up NFL defenses league scouts went on the lookout for the next Newton. Griffin capped off his pre-draft resume with a great showing at the NFL combine running the 40-yard dash in a blistering 4.41 seconds. He also answered questions about his height officially measuring in at 6’ 2 3/8”.

The Redskins paid a hefty sum in order to move up to select Griffin. The deal leaves Washington without first round draft picks in 2013 and 2014. Griffin must develop into a superstar for this deal to be a win for the Redskins. That said, I wouldn’t bet against him. The Redskins have had a revolving door at quarterback for years. The current Rex Grossman/John Beck combination would have trouble winning the ACC Atlantic Division, let alone the NFC East. The Redskins were rumored to have strong interest in pursuing Peyton Manning. Once it became clear that Manning favored the AFC and didn’t want to compete against his brother the Redskins moved to Plan B. The Redskins have received some criticism for overpaying and acting out of desperation. There is a case to be made for both points but it boils down to this; Washington needed a quarterback and they went out and got one.

They could have chased after Packers backup Matt Flynn in free agency. Flynn has started just two games in his NFL career. He’s no sure thing. The benefit to adding Flynn would’ve been keeping the draft picks that were sent to St. Louis in the Griffin trade. Of course, if Flynn bombed in DC then the Redskins would be right back in the same spot a few years from now.

Washington could have walked away from the Griffin sweepstakes and instead chosen to select the next highest rated quarterback in April’s draft. Ryan Tannehill of Texas A&M is largely regarded as the third best QB prospect behind Andrew Luck and Griffin. Tannehill seems to be getting a pre-draft bump as teams scramble for solutions at quarterback. He figures to be overvalued come draft day just as Christian Ponder and Blaine Gabbert were reaches for QB hungry teams in the early first round last year. The safer route for Washington may have been to sign Flynn or draft Tannehill and hold onto those extra draft picks. The Redskins clearly made the decision that Griffin was such a superior talent that acquiring him was worth the cost.

The Redskins have long been criticized for being too enamored with winning the off-season and not interested enough in building a real team. The Griffin deal could be misconstrued as another desperate attempt to win the off-season. The difference this time is that the headline-grabbing move in March will result in a bona fide answer at football’s most important position come training camp. You can criticize Washington for mortgaging their future but the fact is that no team in the NFL has a future until they have a quarterback. Redskins fans should rejoice, stock up on RG3 merchandise, and hope that Bruce Allen, Mike Shanahan and Dan Snyder can surround Griffin with skill position talent.