How to rebuild a broken team. 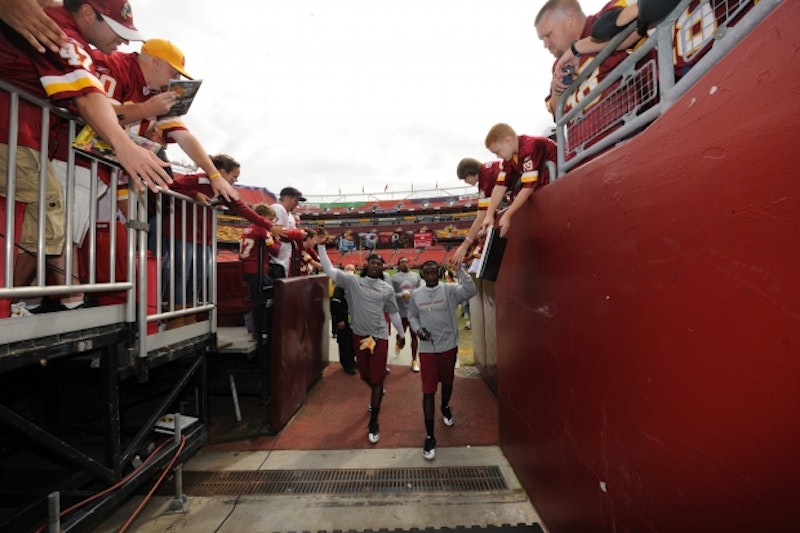 Washington Redskins owner Dan Snyder has eschewed building his team through the draft in favor of free agents, often splashy big name signings, to the detriment of the franchise. As a result of this strategy the Redskins have struggled to assemble team depth and therefore are often at the mercy of and more susceptible to injuries. This leads to more losses than wins on the field.

In the 1980s the Redskins signed famous veterans, too, and the strategy worked as the team won three Super Bowls over a 10-year span. But the game is different now. Whereas before the Redskins could sign two or three older players and pay them good salaries just in case they were needed, now with the salary cap, teams need more flexibility. Now, with the advent of the rookie salary cap, first and second round picks are even bigger bargains than before, making them a lot more valuable.

The Redskins needed to move into the salary cap era and the way to do that was to build through the draft where talent is cheaper. Before the rookie cap, teams would have to pay players as if they were perennial pro bowlers when they had never played a snap in the NFL. This made picking high in the draft not only risky on a talent basis, but there was a significant financial penalty for picking the wrong guy. For example, in 2009 the Detroit Lions picked quarterback Matt Stafford first in the draft and gave him a six-year deal worth $72 million with $41 million guaranteed. In 2010 the St. Louis Rams took quarterback Sam Bradford first and gave him a similar contract for six years, $78 million with $50 million guaranteed. Last year, the first draft held with the rookie salary cap in place, saw the Carolina Panthers select quarterback Cam Newton first overall. Newton signed a four-year contract worth $22 million.

The Redskins are coming off a year in which their quarterback play was, frankly, nauseating. The two quarterbacks on the roster last season were both old and bad. That’s what we call a lousy combination. With the way the modern NFL has evolved into a passing league, the importance of having a good quarterback has never been higher. Yet the Redskins have possibly the worst quarterback situation in the NFL. They have nobody who is any good, nobody who will get any better, and no particular prospects of any sort to look forward to.

They do have something though: the sixth pick in this year’s NFL draft. There are, of course, a number of young quarterbacks whose names are making the rounds and two in particular are thought by many to be future stars. One is Stanford’s Andrew Luck and the other is Baylor’s Robert Griffin, III. Those two are virtually assured of being picked one-two in the draft, meaning the Redskins at pick number six won’t be able to select either unless they trade up to do so.

Of course, trading up means forfeiting the sixth pick in this year’s draft, very likely the team’s first round pick in next year’s draft and probably several additional picks as well. For a team in the Redskins position, they need both depth and talent at just about all positions that makes dealing quantity for quality problematic. There is an argument that says you can’t win without a good quarterback so just about everything else you do isn’t important without that. That says whatever it takes to get Griffin or Luck (but probably Griffin), do it. Still, it’s a path the Redskins have been down before with any number of highly drafted quarterbacks.

The other argument says there are 21 other positions on the field that the team needs to upgrade so there’s no need to force anything. Pick the best players available when your selection comes and trade down as often as possible to pick up more picks and thus more players. That is what the Redskins did last year and it was a sip of cold water to a wanderer in the desert.

If the Redskins decide to stockpile draft picks, they could still fill the quarterback position by signing a free agent; and several are available. The biggest name will be Peyton Manning. Manning, 36 next year and coming off of major back surgery isn’t a sure thing to make it through a full season. On the other hand he’s one of the best quarterbacks of all time. Whether Manning would want to involve himself in the hot mess that is the Redskins franchise is another matter, but I imagine that dumpsters full of Dan Snyder’s cash would help him feel better about it.

That’s the conundrum. Should the Redskins continue the success of last year’s draft and take the prudent approach by drafting where they’re at and maybe even trading down to acquire more picks and thus badly needed depth? Taking that road allows the team to go out and sign a Manning (or a Matt Flynn). Can a veteran quarterback with enough young talent around him get the Redskins’ diseased carcass to the playoffs? Or, alternatively, should the Redskins deal two first-rounders plus other picks for the ability to select a potential game-changing quarterback like Robert Griffin, III?

The answer is unclear, but one thing is for certain: picking the right path could yield a dominant player and a string of playoff berths. Picking the wrong one could cause a domino effect of failure that results in head coach Mike Shanahan’s dismissal and sends the franchise back to the drawing board. Again. Choose wisely, Redskins.