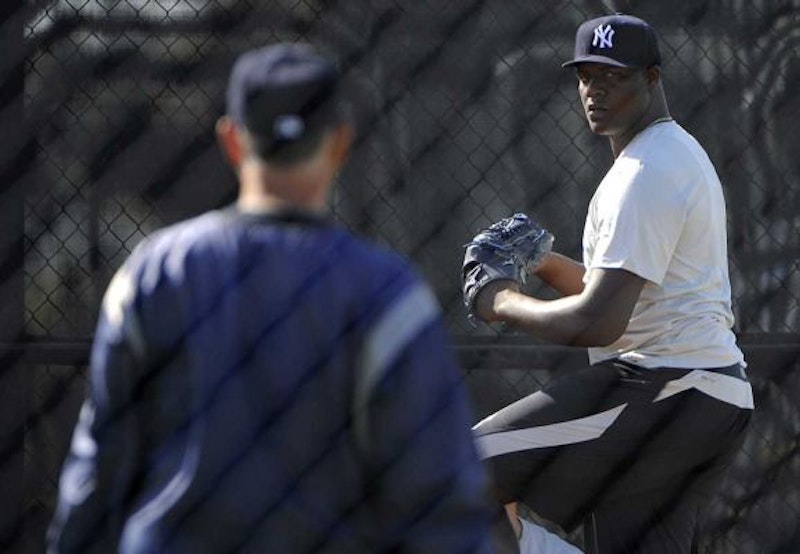 The New York Yankees were slumbering through a fairly inactive off-season by Bronx standards. They weren’t involved in the negotiations for big name starters C.J. Wilson, Mark Buehrle or Yu Darvish. Edwin Jackson wasn’t a likely option either; the last thing the Yankees needed was another A.J. Burnett. New York seemed content to enter another season with C.C. Sabathia and a bunch of question marks in the rotation. Then, out of the blue, Yankees GM Brian Cashman finally acted boldly and decisively to address his team’s starting pitching troubles.

In late January Cashman signed Hiroki Kuroda, formerly of the Dodgers, and traded prized catching prospect Jesus Montero to the Mariners for 22-year-old fireballer Michael Pineda. Kuroda was an excellent performer in four seasons with the Dodgers. He’ll be transitioning to the AL East at the age of 37. Kuroda may settle in as the Yankees number two starter behind Sabathia, or he could struggle in the pressure cooker of Yankee Stadium. The trade for Pineda is the really intriguing move for several reasons.

Jeff Passan wrote a terrific piece on Tuesday about the performance of pitchers before and after they become Yankees. Passan pointed out noticeable examples of wild performance swings for pitchers like A.J. Burnett, Roger Clemens, Randy Johnson, Javier Vazquez, Kevin Brown, Carl Pavano and Jeff Weaver. In almost every case the pitchers performed much better in their non-Yankee seasons than they did during their time in New York. There are several logical assumptions for the performance variations.

There’s the general thought that it’s tough to pitch in New York, and that Yankee Stadium can be just as intimidating for the home pitcher as the road team. The media scrutiny in New York is unlike any other baseball town. Randy Johnson was making enemies with New York media before his introductory press conference. It’s also important to remember that Johnson was over 40 and had logged more than 3000 innings in his career when the Yankees traded for him.  Maybe Johnson had trouble with pitching in New York, but he was definitely an old pitcher with a lot of wear and tear on his arm.

The list goes on. Clemens, Mike Mussina, Brown, Burnett, and Vazquez were not rookies before joining the Yankees. Perhaps the perception that New York is a tough place to pitch exists in part because of the Yankees fetish for acquiring older pitchers. Kuroda is a typical Yankee signing; aging vet with a track record of success.

The acquisition of Pineda is New York’s attempt to break the cycle. Pineda was a dominant force in his rookie season with the Mariners. He averaged 9.1 strikeouts to just 2.9 walks per nine innings last year. He struck out 173 batters in 171 innings and allowed just 133 hits. Pitchers like Pineda aren’t typically available via trade.

Jesus Montero is considered a future middle of the order force. When Montero was traded for Pineda he instantly became the Mariners biggest offensive threat. The Mariners offensive ineptitude coupled with a deep stable of impressive pitching prospects made the Montero for Pineda swap possible. The deal allowed the Yankees to finally add an impact arm without forking over $100 million dollars to a pitcher on the downside of his career.

I’ve been critical of Cashman’s inability to land an appropriate number two starter to place behind Sabathia. He failed to acquire Cliff Lee, Roy Halladay, Matt Garza, Roy Oswalt, C.J. Wilson, and Dan Haren over the past few seasons. I’m not one to lose sleep over the Yankees missing the World Series; but a team with seemingly unlimited financial resources consistently fielding a subpar rotation was just baffling. With his recent acquisitions Cashman has improved his team for the 2012 season and beyond.