An absolute, and maddening, waste of time. 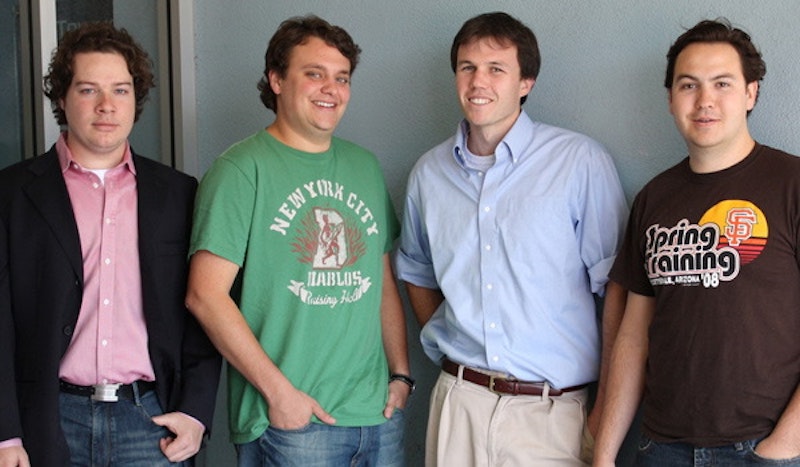 The founders of Bleacher Report

If you’re looking for hot stove information, go anywhere but Bleacher Report. The site masquerades as an intelligent, article-driven sports hub, but it’s really just a pretty collection of unedited blog posts. If you take any of their commentaries seriously, you’ll end up thinking that the Royals “have a legitimate shot to win 96 games” or that “the Mariners could get decent prospects out of an Ichiro Suzuki trade.”

The spelling/grammar mistakes and elementary writing abound on Bleacher Report, but the number of wrong facts is astounding. On any given day, you can count on the “writers” at Bleacher Report to call Cody Ross the best remaining free agent outfielder or insist that Jim Edmonds is still a star for the Cardinals.

The worst, though, is the site’s opinion pieces. Bleacher Report publishes so many ludicrous and absurd stories that give readers the wrong idea. In the world of Bleacher Report, the Marlins want to trade Hanley Ramirez once a week, and here’s something interesting: they don’t want too much in return. Yesterday’s possible landing spots for the “troubled shortstop” includes the nearly prospect-barren Red Sox, the financially-strapped Rays, and the division rivals Braves. Forget the fact that the Marlins have a new stadium and are making a push for contention this year; it’ll all work out as long as they get some quality youngsters. Joel Reuter writes “third-base prospect Will Middlebrooks seems like a good place for the package to start.” He later says that the Red Sox “would likely try to shy away from sending any of their young low-level talent” in any potential deal, i.e. Boston’s only prospects with upside. But apparently including a mix of Ryan Lavarnway, Bryce Brentz, Junichi Tazawa, Lars Anderson (who was almost traded for Rich Harden last summer; that should say something about his talent), and Felix Doubrant would be enough for the Marlins to surrender their franchise player.

The Rays, of course, wouldn’t have to part with much either, mainly because other teams feel so bad about their payroll situation. A potential Hanley deal would be pro bono: anything to help out other Floridians.

In an article about top prospect Trevor Bauer, Matt Trueblood, a regular contributor, writes: “Bauer, the Diamondbacks' top pick in last year's June draft, is already a part of the plans going forward… Arizona would love to trade for a bit of help somewhere at midseason, since they're clearly building for the now, but Bauer is off the table.”

Well, Mark, did you ever consider that the young righty is “off the table” because he’s not even allowed to be on it? Bauer signed with the D-Backs last August as the third overall pick in the 2011 rule 4 draft, and that means he can’t be traded until a year from then. Unless he’s included as a player-to-be-named-later (and he wouldn’t be named until much later), the former UCLA star won’t be moved.

But after sifting through all the garbage, there is news to be found, it just happens to be old and out of context. Bleacher Report is actually good for one thing, though: a laugh. Incredulous reader, click on the link at the top, the headline might just read, “Possible landing spots for Bryce Harper and why the Nationals don’t need him.” Bleacher Report sucks.