Peyton Manning's Getting Shafted By the Colts

Jim Irsay should be ashamed of himself. 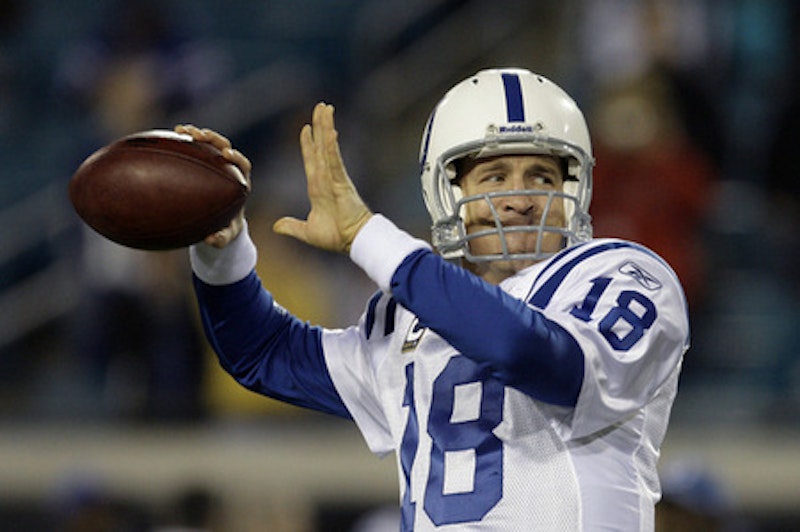 As a Baltimore native and product of a family of Baltimore Colts fans I rarely have much empathy for the people of Indianapolis. I don’t really harbor any ill will, but I didn’t lose any sleep over the Colts 2-14 record last season. That said, no fan base should have to endure the current situation involving Peyton Manning’s looming roster bonus and owner Jim Irsay’s insane Twitter ramblings.

Manning missed the 2011 season after having numerous neck surgeries last summer. Over the past few weeks there has been a near daily flow of conflicting reports concerning Manning’s health. As far as I can tell the QB says (through leaks to various contacts) that he’s fine. Irsay (through interviews and Tweets) contends that Peyton is not fine. The truth, as is often the case, probably lies somewhere in the middle of those two extremes.

The two sides seem destined for divorce sometime prior to March 8. After that date Manning’s massive salary for 2012 becomes guaranteed and the team will be left with an untradeable asset. The Colts are a virtual lock to select Stanford quarterback Andrew Luck with the top pick in April’s draft. I wrote last month that Luck should refuse to play for the Colts and force a trade. My rationale at the time was that Luck would either be backing up Manning or replacing a legend with a shell of a roster around him. Neither of those options is attractive. Now, given Irsay’s unprofessional and borderline bat-shit crazy comments, Luck has another reason to say “No, thanks” to the Colts. If Irsay can publicly trash the man that made his franchise one of the league’s most popular then how will he treat a green kid from Stanford?

Irsay has forgotten that before Peyton Manning the Indianapolis Colts were nothing more than “that team that moved in the middle of the night.” The team had just five winning seasons in the first 14 years after the Mayflower vans rolled into town from Baltimore. Manning arrived in 1998 and led the franchise to a winning record in 11 of his 13 seasons, including 11 playoff and two Super Bowl appearances. Indianapolis just hosted the Super Bowl in a building that Peyton Manning built. Without Manning there is no Lucas Oil Stadium, Super Bowl victory, or untold millions in Irsay’s coffers. Hell, the Colts may not even be in Indy anymore if it weren’t for Manning.

Jim Irsay has the right to do whatever he pleases with his franchise, but publicly muddying the name of the greatest player in the history of Indianapolis football is a terrible decision. It’s almost as if Irsay is hurt that Manning missed the season and has lashed out like a petulant child. I hope we haven’t seen the last of Manning. He’s an all-time great player who clearly doesn’t appear to be ready to hang up his spikes. I hope his body will allow him to continue playing even if the Colts put him out to pasture. Another team will give him a contract, cross their fingers, and sell a boatload of jerseys.

The Colts, on the other hand, are apparently in full rebuilding mode with Luck as the centerpiece. Irsay has apparently made the decision to lead his team into the great unknown. Luck may be the next Peyton Manning, but that would be incredibly fortunate for a single franchise. If Luck is the next David Carr, or even Alex Smith, then the Colts will go over a cliff and Manning won’t be there to save them. Bob Irsay broke the hearts of Baltimore Colts fans and now his son may break the hearts of their Indianapolis counterparts. If Jim Irsay does decide to cut Manning, rather than paying him the money he’s earned, it could be a mistake that sets the Colts franchise back for the better part of a decade.