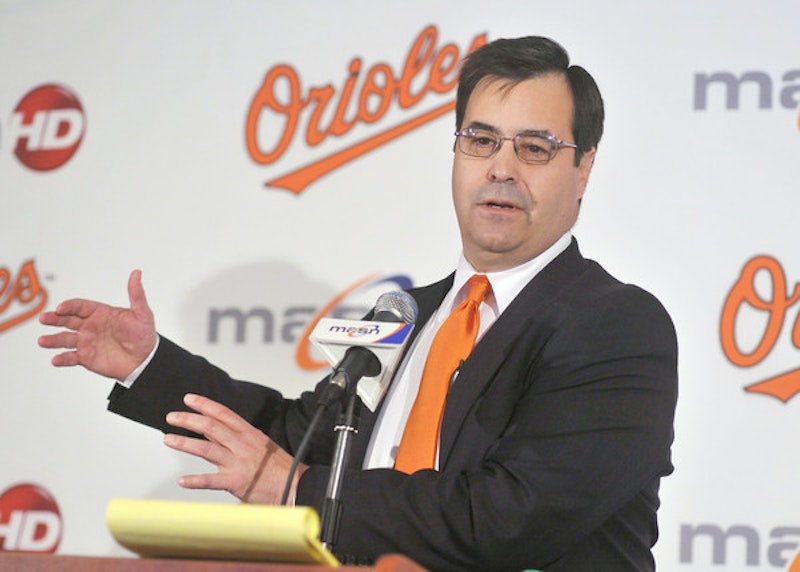 It’s easy to assess players: either their statistics are good or they’re bad. For prospects, a combination of Sabermetrics and scouting reports are used to grade the quality of the player. Executives aren’t as easy to compare. Most trades and signings can’t be criticized until years later, and it’s always unknown how much impact the owner had on certain moves. Regardless, there are some general managers who are clearly unfit for their job and others who deserve an MVP award. I’ll start with the American League:

Andrew Friedman (Tampa Bay): Friedman may very well be the most valuable GM in baseball. He’s the new Billy Beane, in terms of perennially putting together a winning club with an abysmally low payroll. By recycling players constantly Friedman has created a team free of unnecessary financial commitment. Whether it’s by choice or by circumstance, and it’s probably a little of both, the Rays will never be stuck with an Alfonso Soriano/Barry Zito type albatross that nearly every big market club has to deal with. He also knows when to lock down a player and when to trade one. Evan Longoria, Matt Moore, and Ben Zobrist will be Rays for a long time, while David Price only has a couple years left with the team. Every stud that Friedman can extend to an affordable contract he does, and every other player gets traded when their value peaks. This is why Tampa Bay can function, and why they always have a top farm system.

Jon Daniels (Texas): His first couple years were rough, but after trading Adrian Gonzalez and John Danks for almost nothing, it looks like the young GM has gotten the crummy deals out of his system. Since then, Daniels has built up an impressive major league club and farm system, all while keeping payroll low. The Rangers have financial flexibility, but that doesn’t mean they need to frivolously throw their money at any high-profile free agent that’s available; Daniels realizes that. Yu Darvish is a big investment, and a huge risk, but Texas’ scouting department is obviously superb. How he handles the Josh Hamilton extension talks could really set the 34-year old apart from his peers.

Alex Anthopoulos (Toronto): AA is already a legend in Canada. After years of J.P. Ricciardi manning the front office, Anthopoulos seems like a savior. The fairly new GM has built up an impressive minor league system while still maintaining a .500 ball club. No doubt Jose Bautista has a lot to do with it. The Canadian-born executive obviously got lucky with the slugger; Joey Bats could’ve transformed into Barry Bonds on any of his four other teams. Anthopoulos had enough sense to extend the third-baseman/outfielder, though, and I’m not sure many other GM’s would’ve taken the risk. He is especially savvy when it comes to trades, also, having famously “stolen” Yunel Escobar and Colby Rasmus from the Braves and Cardinals, respectively. The Blue Jays will compete once again under his watch.

Ben Cherington/Brian Cashman (Boston, New York): It’d be hard to rank Cherington higher than Cashman because his GM tenure for the Red Sox is just a few months old, and the few moves that he has made (and the plethora of ones that he hasn’t) weren’t the most popular. He needs to be given a chance, however; he was Theo Epstein’s assistant for a reason.

Cashman doesn’t solely deserve the spot either, though, because while the longtime Yankees executive is the author of some inspired acquisitions, he’s also responsible for some duds. This winter’s Michael Pineda-Jesus Montero swap looks like a rare win-win, and signing Hiroki Kuroda to fill out their rotation was smart. The record-setting Alex Rodriguez contract can’t be forgotten, however, and neither can the AJ Burnett deal a few years back. For now, the two are tied for mediocrity.

Billy Beane (Oakland): He’s a perennial “best executive” candidate because of Moneyball, but it’s evident that Beane has lost touch with the baseball world. It’s as if he just doesn’t care anymore. In interviews, the longtime A’s GM consistently blames their losses on payroll constraints, but never makes mention of the Rays. In reality, the former first round pick probably just isn’t making the effort to find the next market inefficiency to exploit. That will probably change once their new stadium in San Jose is opened, but for now putting him any higher on this list would be silly. It’s clear that he has the talent to be the best GM in baseball; he simply hasn’t shown it recently. This winter, Beane went through another gutting of his pitching staff, trading Gio Gonzalez, Trevor Cahill, and Andrew Bailey for useful prospects. Once 2014 rolls around, the Athletics will be rejuvenated and youthful, finally ready to contend until then. And if they don’t, Beane has no need to worry; he’s signed through 2019.

Jerry Dipoto (Los Angeles): What a start! Signing two big name free agents, one of them Albert Pujols, isn’t common for first-year GM’s. Dipoto has had some practice, though, as he commanded the Diamondbacks for the second half of 2010. The former major leaguer better hope the Angels make the playoffs, because owner Arte Moreno will not be happy if he committed over $300 million to two players for nothing.

Jack Zduriencik (Seattle): Remember when Jackie-Z and the M’s were flying high in the winter of 2009-10? Seattle had just rebounded from utter joke to playoff contender because of the hyped offseason moves the team made. Chone Figgins, Milton Bradley, and Cliff Lee were going to bring new life to the club and push it into the spotlight once again. Well, that’s not exactly how it played out. The club sputtered out of the gate, and once Lee returned from injury, it was late for redemption. The Rangers had practically claimed the division crown and Jackie-Z had to quickly search for a scapegoat. By the end of 2010, manager Don Wakamatsu had been fired, Ken Griffey Jr. abruptly retired, Bradley was designated for assignment (who didn’t see that coming?), Figgins completed the worst season of his career, the clubhouse was in pieces, and ace Felix Hernandez won the Cy Young award. They’ll be back at the top soon though, because Zduriencik has stockpiled a strong group of young pitchers that will blossom quickly in the cozy confines of Safeco Stadium.

Dave Dombrowski (Detroit): I feel bad for not acknowledging the AL Central until now, but there’s a reason first place changes hands so often. Frankly, Dombrowski isn’t a very talented general manager. He’s capable enough to keep the Tigers a contender (which really isn’t difficult… look at their competition), but it’s doubtful that they’ll ever be one of the best teams in baseball. The desperate signing of Prince Fielder will make the club interesting for a couple of years, but it won’t win them a World Series. Dombrowski clearly doesn’t think much of the draft, since he’s forfeited Detroit’s first round pick three years running. Maybe that’s why their farm system’s such a mess.

Terry Ryan (Minnesota): After stepping down in 2007, Ryan is back with Minnesota to fix all of former GM Bill Smith’s mistakes. Ryan is an accomplished veteran who can definitely turn the flailing Twins around relatively quickly. He’s no genius, though, and Ryan has made his share of mistakes. As far as general managers go, he’s a fairly boring one.

Dayton Moore (Kansas City): The Kansas City GM has proved that he can build a farm system. Eric Hosmer, Michael Moustakas, Mike Montgomery and Wil Myers are future stars. He can’t run a major league team, though, and that’s a pretty essential part of the job. This offseason Moore traded Melky Cabrera for Jonathan Sanchez and extended Jeff Francoeur. His rationale behind those two moves is unknown. If he were smart, Moore would start working on a Hosmer extension and attempt to acquire decent starting pitching, not Sanchez-esque garbage. Additionally, the GM could’ve traded Joakim Soria for Jesus Montero last winter. Alas, he decided to stick with the reliever. I wonder how that’ll work out for him.

Chris Antonetti (Cleveland): He hasn’t been the general manager for very long, but the few moves that he’s made have been unimpressive. Ubaldo Jimenez has upside, but the Tribe shouldn’t be focusing on contention right now. Six years of Alex White and Drew Pomeranz would’ve been much more useful than two and a half of Jimenez. Their barren minor league system desperately needs a bump. A Carlos Santana extension would put the executive in my good graces.

Kenny Williams (Chicago): When you ask someone their opinion on Williams, you’ll usually get a response in the vein of “Kenny Williams? That man is CRAZY! He’s all over the place. One minute he wants to trade someone, the next he signs them to an extension. He’s a wild card.” Is that a good thing? Kenny and Ozzie made a good team, for kicks and guffaws, mainly, but for a while they really meshed. Lately, though, the longtime White Sox GM hasn’t been on point with any of his trades and signings. You can’t blame him for the Adam Dunn deal (who would’ve thought the slugger would be so terrible), but Jake Peavy, Mark Teahen, and Alex Rios have all been busts. Their closer, Sergio Santos, who Williams inked to a very team-friendly extension in November, was dealt to the Blue Jays that same month for Nestor Molina, a mid-rotation prospect with little upside. Oh, and they have the worst farm system in baseball. What is going on in his brain? A prescription for Ritalin would do the Chi-Sox wonders.

This last one’s a little mean, but the winner of “Worst GM in the AL” goes to:

Dan Duquette (Baltimore): Duquette’s hiring is still fresh, and I think some O’s fans are still getting over the shock. Owner Peter Angelos has started a new tradition in Baltimore—hire anyone who’s old, washed up, or in no way useful, and I guess it applies to front office personnel, too. Over the course of the winter, Duquette has signed a couple foreign, no upside pitchers, gotten banned from Korea, and inked Wilson Betemit to DH. Last week, Splice Today’s Dan Soderberg talked about the recent Jeremy Guthrie trade, which, as he deftly pointed out, made absolutely no sense. Welcome back, Dan Duquette, nobody noticed you were gone!