Dylan Bundy is the Orioles Next Big Thing

But hopefully not like all those other next big things. 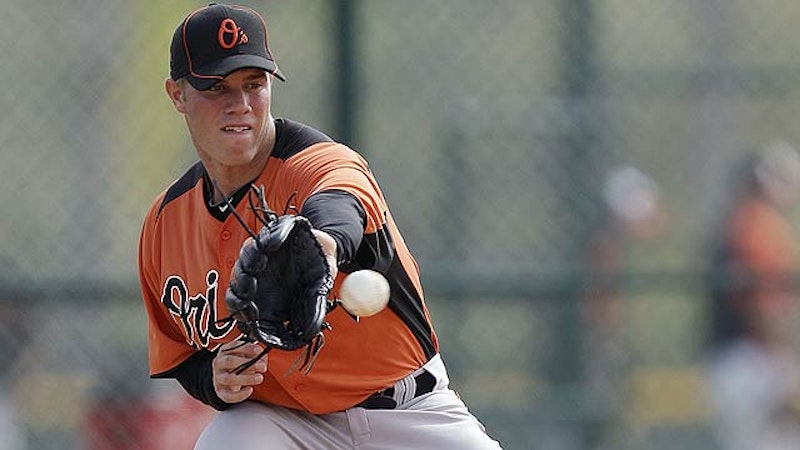 The Baltimore Orioles selected Dylan Bundy with their first round pick in the 2011 MLB draft. Bundy immediately became the Orioles top prospect on the day he signed his contract. He's been ranked among the top ten prospects in baseball by numerous publications this offseason.

The 19 year old Bundy is in Major League camp with the Orioles this spring. He has no chance of making the big club out of Spring Training, but the young right-hander has been turning heads. He's thrown batting practice to rave reviews, reportedly flashed five pitches, and shown great maturity. Dylan Bundy hasn't thrown one inning as a professional but his legend is already growing. I wouldn't be shocked to learn that he gave mouth to mouth to a dolphin, won a mambo contest with Buck Showalter, arm wrestled Bigfoot, and rides into camp each morning on a unicorn. He's the most interesting man in Sarasota.

Bundy is the next big thing for the Orioles.The franchise's struggles have left the fan base desperate to latch onto any beacon of hope. Matt Wieters was once the Orioles next big thing. He's now an All Star catcher, gold glove winner, and developing middle of the order hitter. Wieters is one of Baltimore's few success stories, and less than a year ago he was dubbed as one of baseball's all time biggest draft busts. The team has had other players over the recent past who were supposed to be saviors only to crash and burn. Jeffrey Hammonds was dubbed "The Next Rickey Henderson" when the O's drafted him out of Stanford.  Matt Riley shot through Baltimore's minor league system and made an ill-advised big league debut in September of 1999. Riley was only 19. He got hurt, had surgery, and never really recovered. I last saw him pitch out of the bullpen for the York Revolution in 2010. Hayden Penn, Adam Loewen, Brian Matusz, and Chris Tillman have all at one time or another been the Orioles' "Next Big Thing".

The Orioles have two big challenges when it comes to Bundy; keeping him healthy, and keeping him in the minors. As I mentioned in my piece last week about the hiring of Rick Peterson, keeping young pitchers healthy could go a long way towards improving the Orioles on-field performance. If Dylan Bundy suffers a catastrophic arm or shoulder injury it could set the franchise back years. Other than Bundy the Orioles don't have a single pitching prospect who projects to be more than rotation filler in the Majors.

The fans are right to get excited about Dylan Bundy, he's a big time prospect and a potential future number one starter. He's also a 19 year old kid. The Orioles aren't going to be a good team in 2012. Dylan Bundy mowing down hitters for the Delmarva Shorebirds may be bigger news than the Orioles score on most days. I'm already trying to figure out when I'll have a chance to head to Salisbury to see him pitch this summer.

The Orioles have been rightfully criticized for their woeful player development record over the past 20 years. The scouting department and player development department have shared in the blame. The lack of patience on the part of the Major League team has also attributed to some of the development issues. Riley debuted as a 19 year old. Hayden Penn made his big league debut at 20. Chris Tillman has been battered by American League hitters for parts of three seasons already and he's only 23.  The Orioles inability to acquire legitimate Major League pitching, or develop a pitching rich minor league system, has resulted in the over-promotion of the few legitimate prospects that have come along.  The Orioles may have a budding star in Dylan Bundy.  He may really be the franchise savior; a home grown ace. He may be the next Nolan Ryan, an uncomfortable comparison I've already heard too often. Dylan Bundy may be a lot of things, but he's definitely not going to be ready for the Major Leagues any time soon. The Orioles will work to develop him as a pitcher, strive to keep him healthy, and promote him to leagues commensurate with his talent, but the waiting will be the hardest part. I hope Dylan Bundy is a lights out, dominant, number one starter. I also hope I don't see him an Orioles uniform until late in the 2014 season.