If Peyton Manning becomes a free agent, it could set off an explosion of trading. 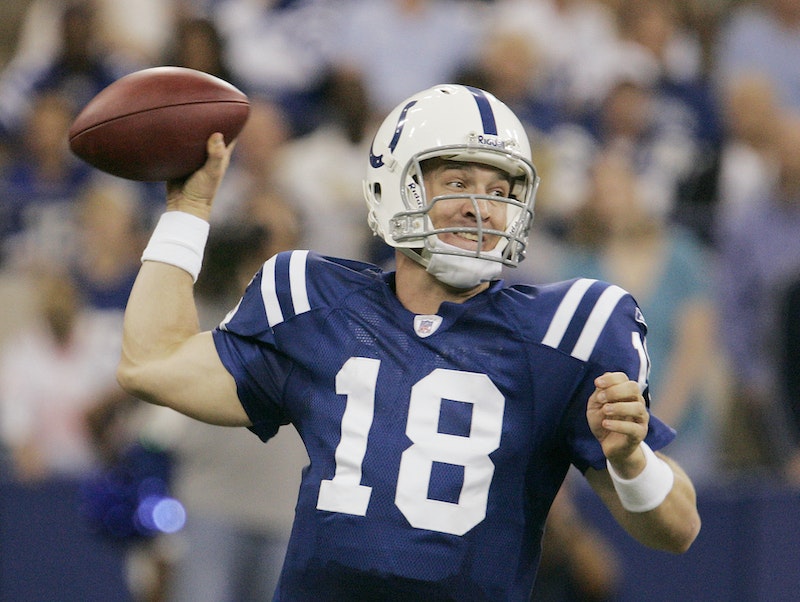 The NFL off-season is about to get crazy. It looks increasingly likely that the Colts will release Peyton Manning prior to March 8th. Quarterback hungry teams are already readying their recruiting pitches for Manning. The Redskins, Dolphins, Jets, Seahawks, and Cardinals have been mentioned as possible destinations for the future hall of fame QB.

The TV networks would no doubt love to see Peyton with the Jets. Not only would Peyton and Eli both be in New York, but Manning would have two games against Tom Brady and the Pats. ESPN would become virtually unwatchable during football season with both Manning brothers calling the Big Apple home. The problem with the Jets is that they lack dynamic offensive weapons. Santonio Holmes is the Jets best offensive player and he was last spotted tossing Mark Sanchez under the team bus.  Peyton will want to go to a team that can win soon and I don't think the Jets are that team. Dan Snyder of the Redskins collects big name stars like fat kids collect candy wrappers, but the Redskins are worse off than the Jets.  Even with Peyton the Redskins may still be the worst team in the NFC East. I think Peyton goes to Arizona where he can team up with All-World receiver Larry Fitzgerald and compete in a weak division. San Francisco is the class of the NFC West, but a Peyton Manning led Cardinals squad could compete for a Wild Card spot.

Earlier this week the St. Louis Rams announced that they would trade the second overall pick in April's draft to the highest bidder. Heisman Trophy winner Robert Griffin III is the prize that teams will be looking to land at the #2 spot. The Rams selected Sam Bradford with the top pick in the 2010 draft and seem content with Bradford as their franchise QB. I think the Rams may be making a mistake. Bradford played fairly well as a rookie in 2010 but his 2011 season was a major disappointment. Bradford doesn't shoulder all of the blame for the Rams dismal 2011 season but his lackluster play didn't help the effort. He threw just 6 touchdowns in 357 pass attempts and missed six games due to injury. The Rams could trade Bradford and use the second pick to select Griffin. Trading Bradford would save St. Louis over $20 million in salary. Griffin is also younger and would be under team control for longer than Bradford.  The Rams aren't close to being competitive. Trading Bradford for a package of draft picks and building around the dynamic Griffin could make St. Louis a long term contender. If Griffin goes to St. Louis he would get to use his blazing speed on artificial turf indoors at least 9 times each season (8 home games, 1 at Arizona).

In the end I think the Rams will keep Bradford and trade the second pick for an obscene package of picks and players. The Cleveland Browns select fourth overall and are rumored to be interested in trading up to select Griffin. As a football fan I'd hate to see Griffin go to Cleveland. I'd like Griffin to have a chance to actually reach his potential and no one seems to do that in a Browns uniform. My guess is Dan Snyder pulls the trigger on a mega deal and brings RGIII to DC.

The last quarterback standing could be Packers backup Matt Flynn. The Dolphins recently hired former Packers offensive coordinator Joe Philbin to be their head coach. Flynn, a free agent, is well versed in Philbin's system. The Dolphins just so happen to be looking for a quarterback; just as they been have since Dan Marino retired over a decade ago. Green Bay could place the franchise tag on Flynn and then look to trade him.  In that scenario the team would be exposed to the prospect of Flynn signing the franchise tag offer leaving Green Bay with the NFL's most expensive backup signal caller. Whether by free agent signing or trade Flynn to Miami just makes too much sense. The Dolphins have been linked to Peyton Manning and RGIII as well, but if I had to bet a mortgage payment I'd bet on Flynn donning orange and teal next season.