With a Shaky Rotation, the Yanks Won't Last Long in the Playoffs

But 2012 holds the promise of a stronger lineup. 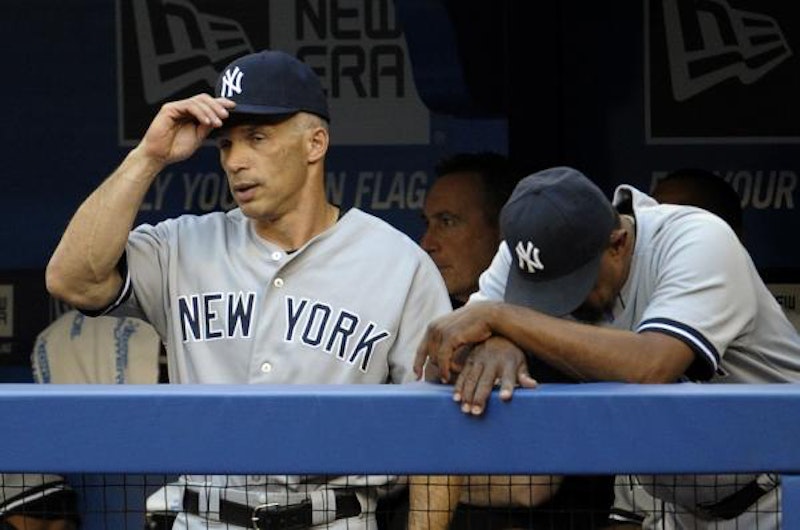 As of late August, the New York Yankees aren’t a championship caliber team. They’ve got the hitting, led by a scorching hot Curtis Granderson. Their bullpen isn’t too shabby either, sporting Mariano Rivera and heir apparent David Robertson. Even offseason signee Rafael Soriano has put his stuff together. New York has many strengths, but the one weakness is glaring, and it will eliminate them from October play within the first two rounds.

The Yankees simply need a better starting rotation. After ace CC Sabathia, the Bombers don’t have anybody worthwhile. AJ Burnett has been a colossal bust for the team, bottoming out last year with an ERA at 5.26. His 4.61 mark this season is a minor improvement, but more should be expected from the $16.5 million man. Ivan Nova has been praised a lot recently for his “grace under pressure” and “composure on the mound,” and while that may be true, he still has an ERA and FIP above 4.20 and a BB/9 that sits dangerously close to his lackluster K/9. Detroit’s Justin Verlander could do handstands on the field and start randomly screaming at the baseball like a schizophrenic released from the hospital too quickly for all I care, as long as he keeps pitching like Bob Gibson for my fantasy team. At least Nova is better than Phil Hughes, the most overrated pitcher in the American League.

Last season Hughes had a “breakthrough” performance, when he won 18 games but was only worth 2.4 WAR, the same amount as the year before, when he was a reliever. While Yankees fans campaigned for CY Young votes, others objectively dubbed him as a solid number 4/5-type pitcher. In 2011 he has a 6.55 ERA through 44 innings. The saving grace of this rag tag starting rotation has been the surprising performance of the two geezers who signed minor league deals with the team prior to the season. Freddy Garcia and Bartolo Colon both have FIP’s around 3.70 with respectable strikeout/walk rates. Still, both of the reclamation projects have had their bad games, and going forward I would not want either to be my number two and three starters in the playoffs.

Once again, GM Brian Cashman did nothing about it. Fans should be glad that he didn’t trade for Ubaldo Jimenez, but they should be equally angry that he didn’t pick up an Erik Bedard/Rich Harden/Hiroki Kuroda type. Not wanting to deal stud prospects is one thing, but when only a B ‘spect is at stake, why wouldn’t “the Ca$h” take a flier? For Bedard, the Red Sox gave up a potential backup catcher in Tim Federowicz and fringy bench outfielder in Chih-Hsien Chiang. Cashman stated that they had no interest in Bedard or Harden because of their injury history, but when so little is given up, and when you’re in a situation like the Yankees’, why wouldn’t you risk it? New Yorkers can start worrying about the Jets and Knicks, because baseball will be over for them before you know it.

In 2012, there’s a new opportunity to build a formidable rotation. Sabathia will opt out of his current deal, but after a new contract of nearly $200 million is agreed upon, he’ll still be wearing pinstripes. C.J. Wilson, another lefty, will also be a free agent. The Rangers will undoubtedly want to retain their ace, but if the Yankees really want him, they’ll get their man. Even with the free agent market tapped, they still wouldn’t have enough pitchers to rival the Rays or even the Angels, which means that they’d delve into the trade market. It’s not Cashman’s style to hold onto prospects, which is what made this summer’s “untouchable list” even more puzzling. For all we know, he storing away his minor leaguers in hopes that Felix Hernandez becomes available. While unrealistic, it’s not entirely implausible. The King will start to get pricey next year, and for a player at the top of his value on a non-competitive team, he’s a luxury. The Mariners could sell high on their ace and rob the Yankees farm system, or any team’s farm system for that matter, and still come out on the bottom. Seattle’s youth movement could use a few more promising players, however, so this theory is up in the air.