The Diamondbacks Aim For a Comeback

Justin Upton and a great rotation in review. 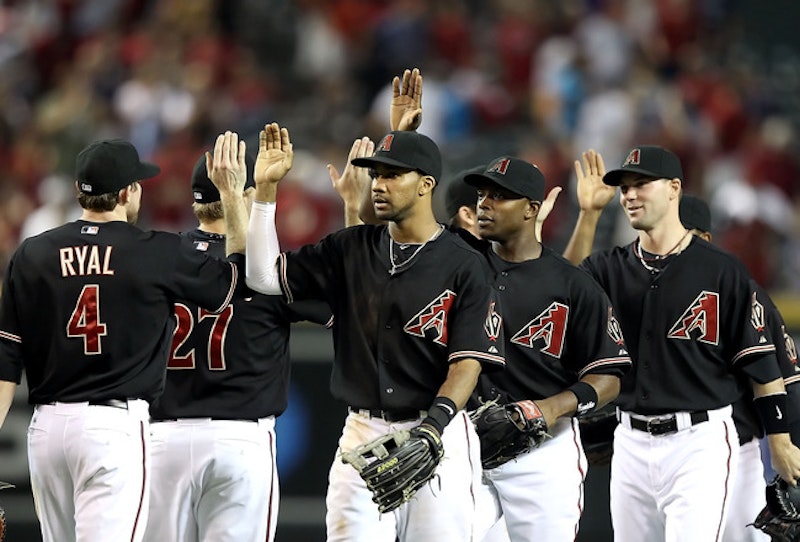 The Arizona Diamondbacks flew under the radar for much of the season's first half. It's easy to see why they were overlooked. The National League West is home to the defending World Champion Giants, the talented Rockies, the dysfunctional Dodgers and last season's upstart Padres. Arizona was generally considered one of baseball's least talented teams during Spring Training.

It appeared that new General Manager Kevin Towers had a massive rebuilding effort on his hands. Rookie manager Kirk Gibson apparently had other ideas. Gibson has proven to be more than just a cheerleading presence in the dugout. As we approach mid-August, Gibson's D'Backs are neck and neck with Giants in the battle for NL West supremacy.

As the July 31 non-waiver trade deadline approached there was a lot of talk swirling around Tampa Bay’s BJ Upton. The Rays were expected to deal the enigmatic outfielder as he will be a free agent after the 2012 season and the team is unlikely to sign him to an extension. Upton looked like a budding superstar during the 2008 postseason. He clubbed seven homers in just 66 at bats in the playoffs after hitting just nine during the regular season. Tampa no doubt hoped that the outburst was the fulfillment of Upton's vast potential. Unfortunately for the Rays, the 2008 playoffs may have been the peak of Upton's career. He has regressed at the plate for the past few seasons and is currently hitting just .224 with a .306 on base percentage.

While the baseball world waited for a BJ Upton deal, it was his younger brother Justin who was actually earning his contract. Justin, who's in year two of a six-year $50 million contract, has been a rock for the D'Backs lineup. Though still just 23, he's a leading candidate for the National League's Most Valuable Player award. Upton is currently leading the league with 33 doubles. He's also stolen 17 bases and mashed 24 homers, including some tape measure shots. Upton, Miguel Montero and Chris Young power the Arizona offense, and a few imported arms lead the pitching staff. Former Yankee prospect Ian Kennedy may be the National League's most unlikely Cy Young candidate. After struggling in limited action for the Yankees Kennedy was quickly jettisoned to the desert in the Edwin Jackson/Curtis Granderson swap. While he doesn't stand a chance of unseating Roy Halladay, Kennedy does possess an impressive 15-3 record and 3.12 ERA this season. In a strange twist of fate Kennedy's rotation mate in Arizona, Daniel Hudson, was also acquired in a deal involving Edwin Jackson. While Kennedy came along with Jackson, Hudson was acquired in the trade that moved Jackson from Arizona to the White Sox. Hudson has feasted on NL lineups. After going 7-1 in 11 Diamondback starts in 2010 Hudson has followed up with a record of 11-8 and a 3.83 ERA this season.

The Diamondbacks may not have the hardware and big names of the Giants or the thunder of the Rockies. They do have a solid young rotation, a bullpen built on power arms and maybe the game's next great slugger in Justin Upton. The NL West race should make for interesting theater with Upton possibly stealing the show.