Can Al Golden Outrun This Hurricane?

Caught up in the Miami mess. 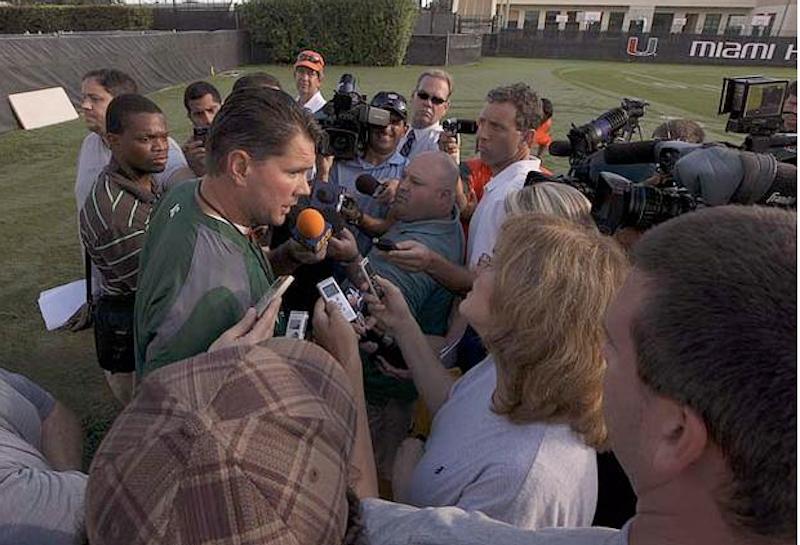 Just a few months ago Al Golden was one of the top up-and-coming coaching names in college football. The former Temple head coach had long been considered the potential heir apparent to Penn State's timeless Joe Paterno. Golden played tight end for Penn State from 1987-1991. Clearly tired of waiting for the warlock in Happy Valley to hang up his clipboard Golden jumped at the chance to head up the University of Miami's football program.

Fast forward to August 16 and Golden's decision, as well as the future of the Miami football program, is in question. The Yahoo! sports story detailing the admissions of Nevin Shapiro, a convicted Ponzi schemer who heaped gifts upon Miami football players for nearly a decade, is a must read. If you like tales of corruption, pay-for-play and prostitution (who doesn't?), and you have some free time, check it out. The Yahoo! story alleges that up to 72 Hurricane athletes took money, goods or some other inappropriate gift from Shapiro. The NCAA has reportedly already been conducting an investigation for the past five months.

That brings us back to Golden. If there is a victim in this latest Miami mess Golden is the guy. Al Golden wasn't a part of the Miami coaching staff during the time of these alleged rules violations, but he's the guy that has to answer the questions. He'll also have to deal with the NCAA investigators poking around the program while trying to keep his players focused on football.

According to a report in The Miami Sun Sentinel the University of Miami alerted the NCAA of Nevin Shapiro's allegations nearly a year ago. Golden was hired in December. Golden said he was not alerted to any allegations at the time of his hire. The University should have informed coaching candidates of any potential NCAA rules violations.

I'm not giving Golden a complete pass. He did take the job at an institution that has faced major NCAA sanctions in the past. The days of Luther Campbell are long gone but the reputation of "The U" is well established. Alums wear "The U's" outlaw image like a badge of honor. Golden chose to dance with the devil and now he's paying the price.

Even if the Hurricanes are hit with the NCAA's dreaded "death penalty" Golden's career figures to rebound. The suspension of the football program for a season would give him the opportunity to jump the sinking ship for another job. He hasn't done anything to diminish the star that was sparkling just months ago. Golden's only mistake was placing his trust in the University of Miami.