A round of applause for Patrick Corbin, Daniel Nava and Jason Grilli. 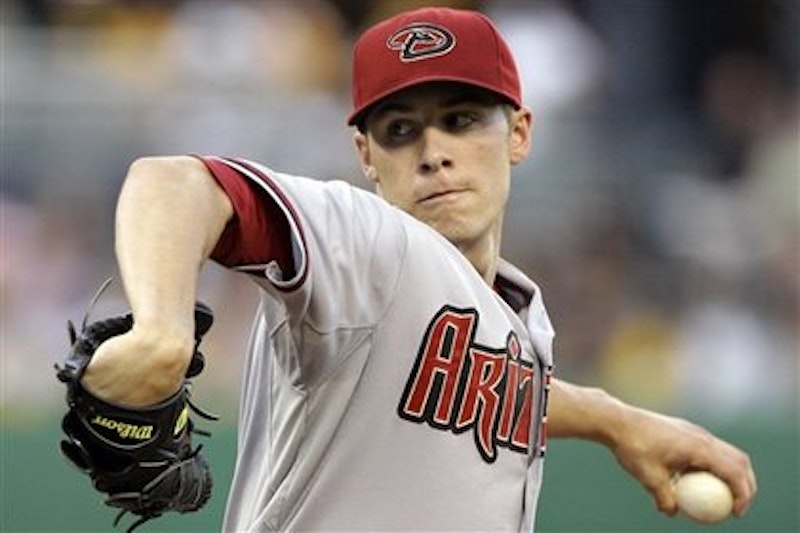 In a division that’s home to the defending champion Giants and the funny-money Dodgers the Arizona Diamondbacks are clinging to a slight lead. The Diamondbacks, who are just one game above .500 and have a run differential of -2 for the season, have generally been a one man wrecking crew with first baseman Paul Goldschmidt smashing balls to the far reaches of the desert. While Goldschmidt’s clouts have been grabbing attention it’s the play of two other young players that has the Diamondbacks staying in the playoff race.

Patrick Corbin came into this season as 23-year-old lefthander coming off a less than stellar rookie campaign. Corbin, originally acquired from the Angels in the 2010 trade that sent Dan Haren to Anaheim, struggled in his first big league action last season when he allowed 117 hits and 14 home runs in just 107 innings. The southpaw has responded in 2013 with a 9-0 record, 2.22 ERA, and 1.00 WHIP. Corbin’s most impressive stat may be the 14 quality starts he’s registered in 16 outings.

Joining Corbin as an Arizona surprise is 26-year-old outfielder Gerardo Parra. The Venezuelan born outfielder broke into the Majors in 2009 but constantly battled for playing time. Parra’s been considered an excellent defender but he was over in each of the past two off-seasons when the Diamondbacks front office signed veterans Jason Kubel and Cody Ross to questionable deals. A spring training injury to Ross opened the door for Parra this spring and it doesn’t look like he’ll relinquish the job anytime soon. Playing Robin to Goldschmidt’s Batman this season Parra is setting career highs in batting average, on base percentage, slugging, OPS, and doubles. He’s also on pace to eclipse his career highs for walks and runs.

When Orioles manager Buck Showalter left a visibly tiring Wei-Yin Chen (a lefty) in to face the Red Sox Daniel Nava (a righty) in the Red Sox home opener I thought it was questionable, but come on, it’s just Daniel Nava. It’s not like he’d hit a three-run homer, right? Boom. Nava blasted Chen’s offering over the wall and gave the Sox a 3-1 lead. Three months later pitchers and fans alike should no longer be thinking, “It’s just Daniel Nava.” After toiling in the minors for years, breaking into the Majors as a 28-year-old rookie in 2011, and serving as a light-hitting reserve outfielder for two seasons, Nava’s morphed into one of Boston’s most dependable bats. He’s already set career highs in home runs and RBIs and is on pace to smash his career best OPS of .742. The Red Sox 2013 offense has been much better than it has any right to be and Nava’s performance, coupled with the resurgent David Ortiz, and the anomaly that is Jose Iglesias, has Boston at the top of the American League East standings.

It’s been two long decades for baseball fans in Pittsburgh. While the Steelers and Penguins have delivered championships to the Steel City the Pirates have languished in the National League cellar. After getting off to fast starts in 2011 and 2012 only to fizzle after the All Star break this year’s version of the Bucs looks real. Homegrown talents like Andrew McCutcheon, Starling Marte, Neil Walker and Pedro Alvarez dot the Pirates lineup. Young pitchers Jeff Locke and Gerrit Cole have joined forces with vets like A.J. Burnett, Francisco Liriano, and Wandy Rodriguez to give Pittsburgh one of the National League’s best rotations. The biggest surprise for Clint Hurdle’s squad has to be closer Jason Grilli. The 36-year-old is having the best season of his Major League career leading the Pirates with 27 saves to go along with a 0.85 WHIP and 1.72 ERA. Grilli, who was at one time a top Marlins’ prospect, accounted for 32 holds out of the Pittsburgh bullpen last season and inherited the closer role when Joel Hanrahan was dealt to Boston. Hanrahan is out for the season after having Tommy John surgery in May while Grilli looks poised to pitch the Pirates into the postseason for the first time since 1992.