Why Do We Hate Baseball Announcers?

Because we envy them. 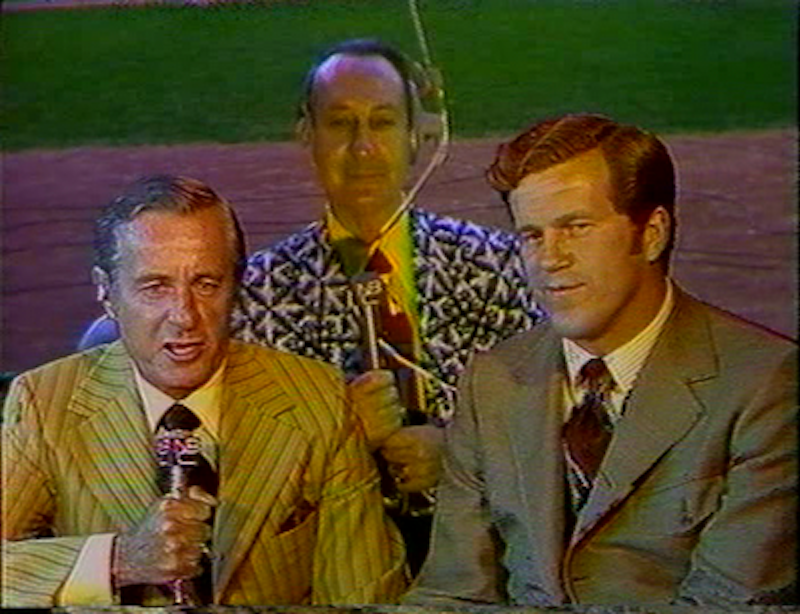 Who you spend time with during very important baseball games is the stuff of flashbulb memory. I remember exactly who was at Yankee Stadium with me for Doc Gooden’s no-hitter in the Bronx in 1996, who was in the Brooklyn loft for Sid Bream’s slide in October of 1992 and what color the carpet was back in an Ohio living room when Bob Moose threw his wild pitch in the ninth inning of Game Five of the 1972 NLCS, punching the World Series ticket for the Reds. Tony Kubek and Curt Gowdy called that game for NBC. They were a great tandem.

Gowdy left us in 2006, but Kubek is out there somewhere in Wisconsin, having abandoned the game and refused media requests ever since he retired. Reached by ESPN Classic writer Ouisie Shapiro back in the mid-1990s, Kubek said he was utterly disconsolate with the state of the game especially in the wake of the 1994 work stoppage. He wanted nothing to do with the ego battles waged within the media over the cable airwaves. And this was well before Deadspin, AwfulAnnouncing.com, Bleacher Report and all the other baseball hoo-ha and punditry sump pumps now cluttering the bandwidths. The torrent of sewage makes me want to possess an old-fashioned “mobile device” called a hand grenade.

But there’s no need for violence as the playoffs loom. The good news is TBS has fortified its postseason baseball broadcast roster with a studio analysis position for Pedro Martinez. He’ll be joined by the Don Zimmer of smarm Keith Olbermann. The over/under on Olbermann jokes about dugout reporter Craig Sager’s loud suit jackets is five per game. TBS has also added Olbermann pal Dirk Hayhurst, the former scrub reliever and author who has a certain Matt Taibbi quality on-air. Throw in Cal Ripken, Jr., Ron Darling, Bob Brenly, Dick Stockton and Dennis Eckersley and it appears TBS has the Navy Seabees version of October broadcasters.

In recent years I’ve found many fans have become announcer-obsessed, probably because they’re forced to spend way too much time with Playbill-toters like John Sterling and Susan Waldman. They might heap further hatred on poor Hawk Harrelson’s head in Chicago, or rip Tim McCarver to shreds or cry foul when Jon Miller goes on too long about boats in McCovey Cove.

But the main cause of all the bashing is simple. It is envy. Anyone who spent time and money in the “Budweiser Play-by-Play” booth in the old Yankee Stadium loge knows how much fun it is to describe and analyze baseball for other fans to consume. The bygone booth allowed you to fork over $20 to don the headset and microphone and “call” an inning of a Yankees game using the in-house MSG feed, getting your own videotape to take home. It was under-promoted and often sat unused for long stretches. I’d visit frequently and find the dude running the booth watching porn on his fancy video deck. He gave me free innings during slow and cold May night games. Beer, especially the sponsor’s brand, was allowed and encouraged. Superfan Freddie Sez would drop in for a chat and you could ask him what he thought about George Steinbrenner brokering the sponsorship deal with Adidas. I called Roger Clemens buzzing the chins of the first three Twins batters he faced, I called a ridiculous Manny Ramirez drop in the outfield and more than one appearance by sandbagging bullpen schlubs like Donn Pall and his weighty batterymate Ron Karkovice, who hails from nearby Union, New Jersey. Feel free to throw in these details during your stint on-air because the minute you do, you are very popular in Union, New Jersey. Which is nice. And they call this a job?

For those who enjoy watching postseason games in taverns, the announcers are less important. Taking in a televised game with the sound off and a jukebox on allows for a twisted soundtrack to evolve. It also makes these online vendettas against Joe Morgan seem even sillier as they redline the time-wasting meter. If anything, we should always defer to the ex-ballplayers when it comes to face time in the booth.

Back home, having the Directv Extra Innings package allows for late-night sessions with the amazing Vin Scully. He’s not really an announcer; he’s more of a curator of the game, to coin an overused buzzword of late. He fits in detailed Russell Martin anecdotes during a 2-2 count. Just when a viewer thinks Scully might be dragging, he rallies late. It is August 9, 2005 and the Dodgers are down 8-4 to the Phillies. Coming off the break in the ninth inning with Billy Wagner taking the mound, the camera catches a father in the stands holding his sleeping daughter on his chest. Pause. Scully: “If you’ve ever had the honor, the thrill and the privilege of holding a sleeping child in your arms, you’ll understand how that guy feels.”

Sit back and drown in his sincerity. And hope it spreads like a virus amongst his broadcasting brethren.