The Orioles had a shot, but the front office left them threadbare. 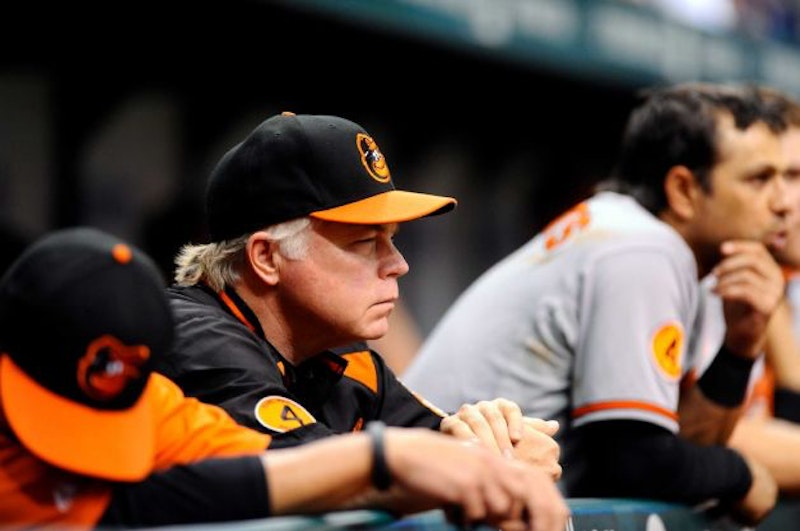 I scraped my first attempt at writing this column on Monday night after failing to muster more than a string of epithets and sobs. The Baltimore Orioles' disastrous weekend in Tampa took an unfortunate and brutal turn when 21-year-old All Star third baseman Manny Machado blew out his knee in a freak play at first base. The stomach churning video of Machado’s injury was only slightly more unsightly than the Orioles collective bed-wetting in the most important series of their season. The O’s were officially eliminated last night at Camden Yards, falling to the Blue Jays.

Last weekend had a chance to serve as the finest hour for Buck Showalter’s ballclub. The Orioles had pulled to within a game of the American League Wild Card and headed to Tampa to square off in a four-game series with the Rays. Baltimore took a 4-3 lead into the late innings on Friday before rookie reliever Kevin Gausman promptly surrendered the lead setting off a marathon of offensive ineptitude that had me wishing for a Biogenesis intervention around the 15th inning. I called it quits at one a.m. and headed to bed fairly certain that Orioles would find a way to lose. They obliged.

After last season’s remarkable run of good fortune the Orioles couldn’t buy a break over the past two months. The countless blown saves, stranded base runners, and lack of patience at the plate served as a thousand tiny pin pricks for the fans of Birdland. Machado’s gruesome knee injury served as the final gut punch, as not only had the Orioles looked lifeless in Tampa but lost their brightest star in the process.

There will be time for reflection and thoughtful discourse on the state of the Orioles in the coming weeks. That time is not now.

The Orioles have registered consecutive seasons above .500 for the first time since 1996-97 but fans don’t want hear about that today. The fact is that with the historic season of Chris Davis, the breakouts of Machado and Chris Tillman, and a record-setting defense this team could have, and should have, been so much more. When the going got tough the 2013 Orioles generally ended up in a puddle of their own filth. The ultimate indignity will be when the Orioles finish behind the collection of mummified corpses that passes for the New York Yankees these days.

How does GM Dan Duquette spell regret? Wasting 407 at bats on the trio of Taylor Teagarden, Ryan Flaherty, and Alexi Casilla is a pretty good start. Of course there’s also the 22 games started by Freddy Garcia, Zach Britton, and Jake Arrieta. For all the complaining about the Orioles inability to come through in the clutch or simply having their luck run out, the truth is that a team that gives that much playing time to players more suited for the Toledo Mud Hens doesn’t deserve to make the playoffs. The season-long slumps of Nick Markakis and Matt Wieters, coupled with the lack of production from 2B and DH, simply left the offense too thin to produce when Davis, Machado, and Adam Jones inevitably slumped.

The Orioles will enter the offseason with many of the same holes that were apparent last October. Duquette set about offsetting those weaknesses with all the urgency of a three-toed sloth on Quaaludes. The Baltimore faithful can only hope that the past six weeks of excruciating baseball will compel Duquette to act in the coming months.