Cubs' Dale Sveum Was Hired to Be Fired

Is Joe Girardi in line to be next Chicago manager? 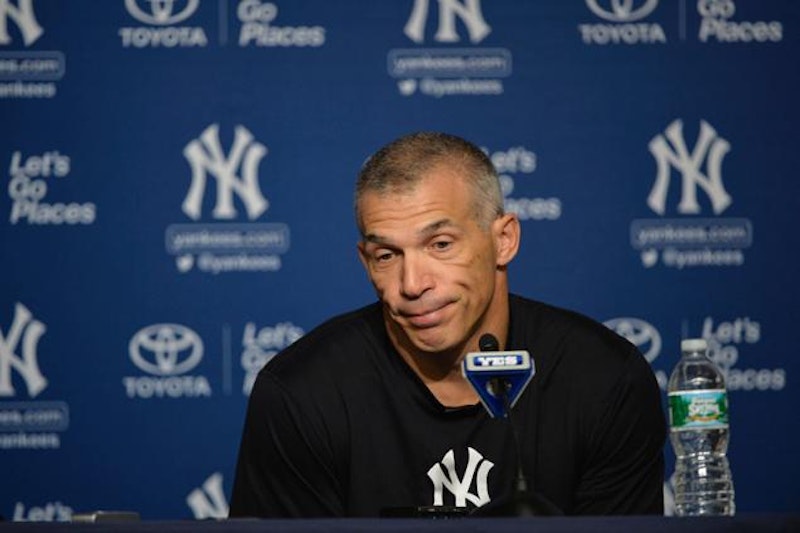 The Chicago Cubs made it official on Monday when President of Baseball Operations Theo Epstein announced that manager Dale Sveum was relieved of his duties. Epstein’s announcement ended weeks of speculation regarding Sveum’s status and brought a close to the latest disappointing chapter in Cubs' history. Sveum went just 127-197 in his two seasons at the helm in Chicago and drew criticism from fans and media for the way he handled young players Anthony Rizzo, Starlin Castro, and Darwin Barney.

The firing of Sveum shouldn't come as a shock to any avid Cubs follower. The 2013 team was never expected to compete for the playoffs but the on-field regression of assumed franchise cornerstones like Castro and Rizzo ultimately led to Sveum's demise. The Cubs don’t figure to be big players in free agency (sorry Robinson Cano) this winter meaning that the next wave of talent will be coming from the minor league system that Epstein and General Manager Jed Hoyer have spent the last two years stocking with quality prospects. The struggles of Castro and Rizzo, and Sveum's responsibility for those struggles, has cost the manager the chance to manage the next generation of Cubs' stars.

When players like Jorge Soler, Javier Baez, Kris Bryant, and Albert Almora debut at Wrigley Field someone other than Sveum will be writing their name into the lineup card. Given the manner in which Epstein and Hoyer have gone about acquiring young talent fans should feel confident in the front office's ability to correctly evaluate the manager.

I looked at Sveum as a sacrificial lamb for the Cubs. The team embarked on a highly publicized rebuilding program upon Epstein's arrival, and anyone paying attention could see that the Cubs were going to take their lumps for a few seasons. The hiring of Sveum brought considerable criticism as former Cubs second baseman and Hall of Famer Ryne Sandberg was also in the running for the job. Epstein and Hoyer didn't want to put a player with the reputation and stature of Sandberg in the position of captaining a sinking ship and withstanding the slings and arrows that would ultimately come with it. Sveum, who had no such stature in Chicago or the Cubs' office, received no such benefit. Sveum was a good soldier for two seasons. He collected a few million dollars, padded his resume, and served his purpose. In the end, Sveum was hired to be fired.

Who will replace Sveum? Speculation has centered on current Yankees' manager, and Chicago native, Joe Girardi. Girardi played parts of seven seasons for the Cubs and is highly regarded in baseball circles. Girardi may be coming off his best season as he kept an injury-riddled Yankees squad in the playoff hunt until the final weeks of the 2013 season. Girardi's contract with New York ran through the 2013 season making him a free agent. If the Cubs are unable to lure Girardi to Chicago with a lucrative contract and high impact young talent they could turn to Brad Ausmus. The former catcher for the Padres and Astros is currently working in the San Diego front office and thought by many to be a manager in the making.

Sveum got his chance because Epstein didn’t want to be remembered as the guy that fired Ryne Sandberg. With Sandberg gainfully employed in Philadelphia, Epstein may now be lauded as the man that brought Joe Girardi to the Windy City.