Camden Yards Shuts Down for 2013

The reverse pageantry of the season’s final game. 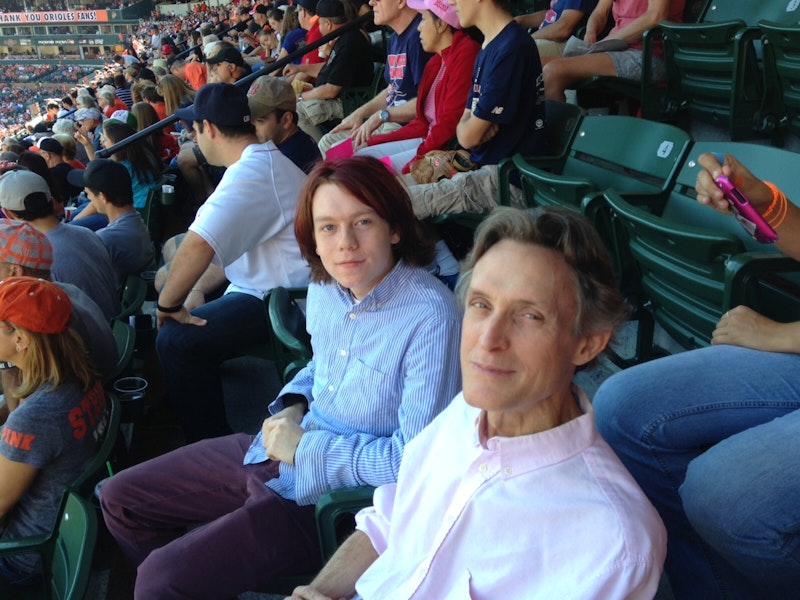 Since I’m a one-sport guy—baseball—the end of the regular MLB season, which roughly coincides with the annual onslaught of Christmas ads and decorations, isn’t at all pleasing. Fortunately, my team, the Red Sox, defied low expectations and open the ALDS at Fenway Park this Friday; but even if the Sox make it to the World Series (a big who knows), baseball for 2013 is almost over. My mind plays tricks: around the first of the year, it’s hard to even visualize a game in progress; and then spring training begins and the cycle repeats itself. Already, I can’t wait until the Super Bowl (one of the silliest “holidays” in America today) is over.

Still, one of my idiosyncratic pleasures is attending the last game of the season, which I did on Sunday with my family at Baltimore’s Camden Yards, a meaningless game for both the hometown Orioles, who faded down the stretch, and the Bosox, whose manager John Farrell fielded a lineup of rookies and regulars. We attend a dozen or so games a year, and it’s fun to say goodbye for the year to the ushers and attendants we see on so many Sunday afternoons. Some of these employees are older and we’re always relieved the following season to see them at their appointed stations. And on this occasion, we were joined by Michael Yockel—“The Yoke” as we call him—a swell guy that I first met back in 1979 at the weekly City Paper, when we were both swinging cats who hadn’t yet turned 30. My wife Melissa and sons Nicky and Booker are all very fond of Michael, and he’s an excellent companion at a ballgame (as well as one of the most talented writers I’ve ever worked with); and the only sour note was that his lovely wife Betsy couldn’t join us.

It wasn’t much of a game—the Sox blew a 5-0 lead in the fifth inning, thus assuring that the culprit, Felix Doubrant, a talented southpaw who may be trade bait this winter, won’t be on the post-season roster. Felix is an odd duck: he’s made it clear to his manager that he doesn’t fancy a bullpen role, telling Farrell that he’s only “worthy” as a starter, which puts him square in the prima donna category. In 2004, when the Sox shocked the Yankees in the ALCS and went on to sweep the Cards for their first World Series win since 1918, starter Derek Lowe—demoted to the pen after a so-so 33 starts— was an invaluable contributor, and was rewarded with a fat $36 million free-agent contract with the Dodgers after the season.

Our seats weren’t so great, near the foul pole in left field, which gives you a skewed vision of the action. When Quintin Berry—a speedy journeyman who’s this year’s Dave Roberts for the Sox—unexpectedly went yard in the second inning, the five of us thought it was just a lazy fly ball that O’s right fielder Nick Markakis (a local favorite who had a disappointing year and ought to be traded when he still has some upside) would grab with one hand. Didn’t really matter, though, as final games are more for the reverse pageantry of Opening Day, and even more than usual a chance to gab and gab, reminiscing about past seasons and the upcoming playoffs. Michael’s grudge against the Pirates for defeating the O’s in the ’79 Series hasn’t quite subsided; and Booker hopes the Bucs tank since he thinks GM Neil Huntington is an intractable prig, which offends his Billy Beane/Ben Cherington/Andrew Friedman/Jon Daniels/Theo Epstein style of management. And whenever we see The Yoke, there’s plenty of music talk: which means that I brought up the 40th anniversary of Gram Parsons’ death, and he and Nicky spoke about bands that are as unfamiliar to me as most of the celebrities that are plastered on the covers of Vanity Fair and Rolling Stone.

In Sunday’s New York Times, Jonathan Mahler (author of the excellent Ladies and Gentlemen, the Bronx Is Burning) contributed an article to the “Review” section that questioned not only whether baseball was still America’s “national pastime” but also if it ever really was. Mahler’s a baseball fan, so his writing is wistful, saying that the sport isn’t cool (it’s conservative!) and even though MLB revenues have rocketed in the past decade, the World Series barely creates a ripple in the Nielsen ratings.

He writes: “You can’t talk about the decline of baseball without also talking about the parallel rise of the N.F.L. We’re a sports-crazed culture, gorging on the all-you-can-watch buffet of ESPN, fantasy leagues and video games. But even the 24-hour sports cycle lasts only 24 hours. Decisions must be made, and they invariably favor football. Not only is Madden NFL 25 America’s hottest sports video game; fantasy football has far surpassed fantasy baseball in popularity.”

Maybe Mahler’s right—although the supremacy of football, and more recently basketball, over baseball has been discussed and lamented for decades—I think that in today’s sped-up popular culture, the “national pastime” can switch from week to week. Certainly, on Sunday night, the U.S. was a Breaking Bad nation. And, when you think about it, no matter what team you follow, in any sport, a victory is like a cocaine rush: an hour later, and it’s back to reality.