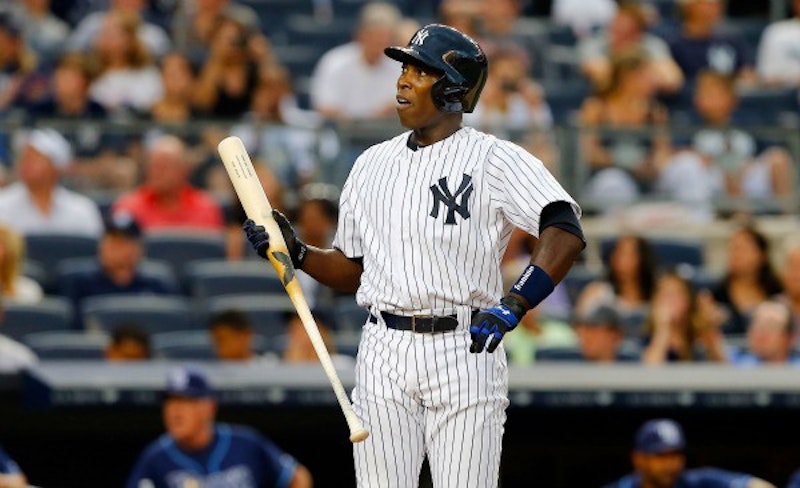 The Los Angeles Dodgers clinched their first National League West title on Thursday with a come-from-behind win over the Arizona Diamondbacks. The Dodgers celebrated by taking a team dip in the Diamondbacks outfield pool much to the chagrin of Arizona infielder Willie Bloomquist. Maybe that’s what Arizona gets for putting a swimming pool in center field.

L.A. overcame a sluggish start to the season thanks to the stellar pitching of Clayton Kershaw and Zack Greinke and the bats of Yasiel Puig and Hanley Ramirez. The Dodgers hit the trade market early when they dealt for Marlins’ right-hander Ricky Nolasco in early July. The 30-year-old hurler was having his best season for Miami when he went from the National League cellar to Chavez Ravine. Nolasco, a free agent after the season, has excelled with the Dodgers. Despite allowing six runs on nine hits in five innings in Thursday’s clincher, Nolasco has gone 8-2 with a 2.63 ERA and 1.13 WHIP for Los Angeles. Nolasco’s strong season has put him in line for a serious free agent payday.

Nolasco isn’t the only veteran pitcher the Dodgers added to the staff. Former Giants’ closer Brian Wilson was signed as a free agent in late July after rehabbing from Tommy John surgery. Wilson has been lights out for Los Angeles. In 13 games out of the bullpen Wilson has given manager Don Mattingly a reliable bridge to closer Kenley Jansen. Wilson has allowed just one run on eight hits in 9 1/3 innings.

The Chicago Cubs took the next step in their multi-season rebuilding plan when they traded veterans Alfonso Soriano, Matt Garza, and Scott Feldman before the trade deadline. The Soriano trade was the worst kept secret of Theo Epstein’s short tenure in Chicago. Soriano, who had been overpaid and underperforming since he arrived in Wrigleyville after the 2006 season, was the poster boy for the inefficient excesses of the Jim Hendry era. When the Cubs dealt Soriano to the Yankees for minor league pitcher Corey Black the left fielder had 17 home runs and 51 RBIs in 93 games. After his trade to New York Soriano found the fountain of youth, or A-Rod’s locker, and went on a home run binge.

In just 44 games with the Yankees Soriano has clubbed 15 home runs and knocked in 47. The addition of Soriano propped up a New York lineup that hit more like the Mariners for the first four and half months of the season. New York has fallen 3 ½ games off the pace in the AL Wild Card hunt but if not for Soriano the Yanks would have been buried weeks ago.

The Orioles traded struggling righties Jake Arrieta and Pedro Strop to the Cubs for veteran starter Scott Feldman in early July. Feldman had a few rocky outings for the O’s but has settled down over the past few weeks to become one of Buck Showalter’s most trusted starters. The free agent to be has posted a 3.51 ERA in 13 starts for Baltimore after pitching to a 3.46 ERA in 15 starts for Chicago. Feldman has outpitched the more ballyhooed Bud Norris who has posted a 4.67 ERA with Baltimore after coming over from Houston. If the Orioles can overtake the Rays or Rangers for the final Wild Card spot in the season’s final week the acquisition of Feldman will have been a driving force.

A year of rumor and speculation finally ended when the Cubs pulled the trigger on a trade for Matt Garza, sending him to Texas for a bunch of prospects. After missing half of the 2012 season to injury Garza returned to the Cubs’ rotation in May. He posted a 3.17 ERA in 11 starts and moved to the top of many contender’s trade deadline wish lists. The Rangers sent top pitching prospect C.J. Edwards and minor league third baseman Mike Olt, along with other prospects, to Chicago for Garza. Garza has generally flopped in Texas. He’s gone just 3-4 with a 4.94 ERA in 11 starts with Texas. The disappointing Garza, coupled with the suspension of Nelson Cruz, sent the Rangers into a free fall. While Garza struggled in Texas C.J. Edwards fanned 33 in 23 innings for Chicago’s Single-A affiliate in Daytona. The 22-year-old finished his first full season of professional baseball with a record of 8-2 and a 1.86 ERA and 155 strikeouts in 116 1/3 innings in 24 starts. Garza will likely leave Texas this offseason as a free agent.