Baltimore’s championship team is too deep to dismiss. 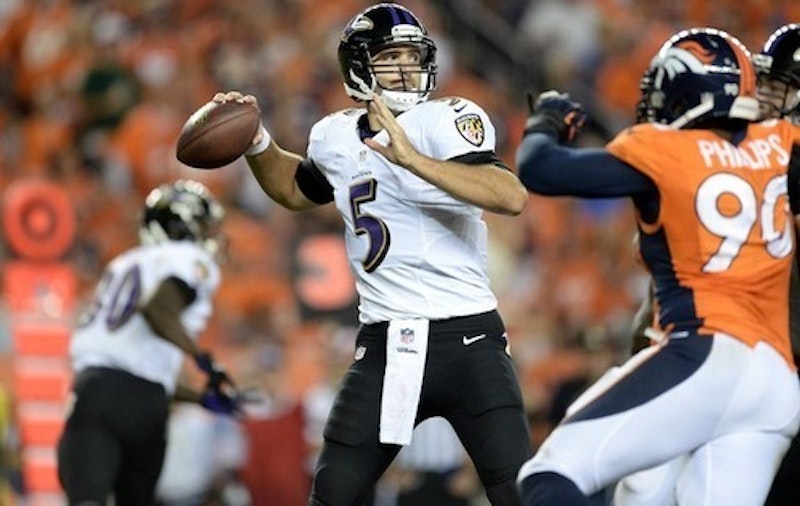 A lot was made of the Baltimore Ravens’ post-Super Bowl purge. Veterans Ray Lewis, Matt Birk, Ed Reed all went off to retirement parties, or to steal money from the Houston Texans. Championship contributors Cary Williams, Paul Kruger, and Dannell Ellerbe found greener pastures in free agency. According to many analysts the final nail in Baltimore 2013 playoff hopes was delivered when Anquan Boldin was traded to San Francisco.

After Week One the critics had little foresight but plenty of reasons to crow. Boldin had torched the Packers’ defense for 13 catches and 208 receiving yards. Boldin’s explosion came just days after the new-look Ravens’ defense had been torn asunder by Peyton Manning and his bevy of receiving options. The Ravens allowed seven passing touchdowns on that Thursday night in Denver while Colin Kaepernick and Boldin looked like the NFL’s new “It” couple.

What a difference two weeks makes.

The Ravens haven’t allowed a single touchdown since the Denver opener. Meanwhile in San Francisco Kaepernick is dealing with the first struggles of his young career. The 49ers have dropped two straight and looked awful in the process. Now the supposedly “rebuilding” Ravens sit atop the AFC North at 2-1 while the retooled 49ers are quickly losing sight of the surging Seahawks.

The past few days in Baltimore have been filled with laments of the Orioles’ lost offense and expired playoff prospects, fretting over Manny Machado’s knee, and the minor controversy surrounding a stripper named Sweet Pea goin’ upside Jacoby Jones’ head with a champagne bottle. Jones was certainly in the wrong place at the wrong time, but any story that involves a stripper named Sweet Pea is worth a chuckle, and probably nothing more. Sadly, in today’s NFL news cycle the four-letter network and its compatriots have countless hours to fill every day. ESPN turned to its newest NFL analyst, Ray Lewis himself, for thoughts on the Jones situation.

Just a day after his induction into the Ravens’ Ring of Honor in Baltimore Lewis was on national TV discussing how Sweet Pea’s transgression indicated a lack of veteran leadership in the Baltimore locker room. Somehow the presence of Ray and Ed Reed in Baltimore would have served as some sort of divine intervention resulting in Sweet Pea’s swing missing Jones’ head or Jones deciding to attend a Bible study on Sunday night rather than a bus filled with stripper headed for the nation’s Capital. Lewis’ comments were nonsense and he probably knows it. The harsh words from the greatest Raven set off a minor dust-up in Baltimore that QB Joe Flacco quickly and appropriately dismissed. Flacco simply stated, “Ray knows better.”

All this overshadowed the emergence of Baltimore’s revamped defense. In the two games since the blowout in Denver the Ravens have allowed a grand total of five field goals and no touchdowns in home wins over Cleveland and Houston. The Cleveland game was easy to dismiss. The Houston game, on the other hand, serves as a harbinger of good things to come. Houston came in with a truckload of offensive weapons and the Ravens summarily shut them down. Baltimore came up with two huge third down stops in the first half that resulted in Houston field goals rather than touchdowns. On the day that Lewis was honored in Baltimore it was his replacement, former Jag Daryl Smith, who returned a Matt Schaub pass for a touchdown just before the half.

Smith was signed during the offseason with some of the money Baltimore saved when Ozzie Newsome shipped Boldin to San Francisco. Smith is joined on the Baltimore defense by fellow newcomers Chris Canty, Marcus Spears, and Elvis Dumervil. Canty and Spears have helped to improve the Ravens’ run defense which ranks fourth in the league holding opponents to just 74.7 yards rushing per game. Dumervil has formed a dynamic pass rushing pair with Terrell Suggs combining for five sacks in three games. Rookie safety Matt Elam has already ascended to the starting lineup and second round pick Arthur Brown could push LB Josh Bynes to the bench in the coming weeks.

The Ravens’ offseason plan clearly showed that they’re intent on being a long-term contender. The decision to deal Boldin was probably the toughest call for Newsome and his front office, and it only looked worse after the injury to Dennis Pitta and Boldin’s Week One revelation. If Baltimore had kept Boldin the defense would have been gutted by free agent losses and hamstrung by the salary cap to make improvements. The trade with San Francisco freed up the cap room needed to bring in upgrades like Canty, Dumervil, and Smith. Astute Ravens’ observers should by now know to take the long view when judging the performance of Newsome and his front office. Baltimore’s defensive upgrades will be contributing to a competitive team long after Boldin’s days in San Francisco have ended.