A lengthy consideration, but bet on Texas. 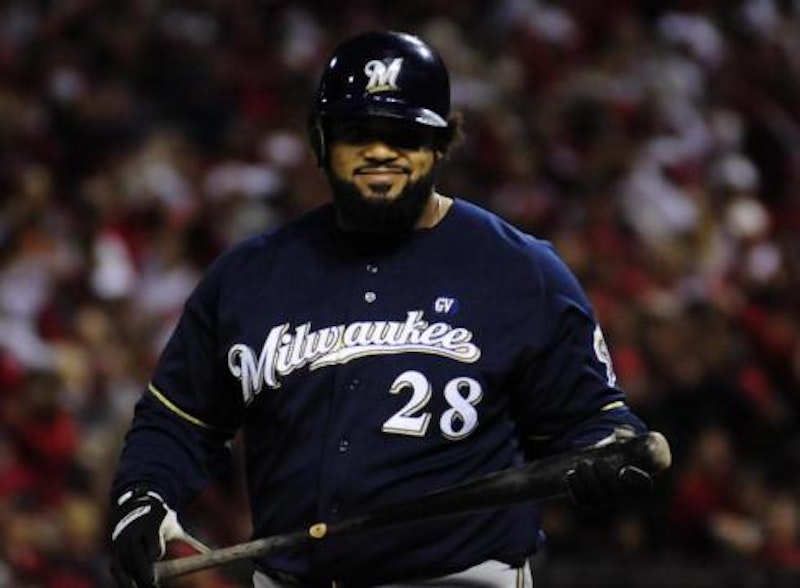 Now that it’s January, Major League Baseball’s hot stove has officially cooled. Most of the big free agents like Albert Pujols, CJ Wilson, and Carlos Beltran have signed. Many of the smaller fish have found homes as well. But there is one huge honcho still looking for a place of his own: Prince Fielder.

Fielder hit .299/.415/.566 with 38 homers, good for fifth in baseball and five more than teammate and National League MVP Ryan Braun. Over the past five seasons, Fielder has finished second twice, fifth, and tenth in homers in all of baseball. He’s posted over .400 on-base percentages each of the last three seasons, and he’ll only be 28 years old next season. Seems like an ironclad resume, so what’s the problem?

First, free spenders like the Red Sox, Angels, and Yankees are already locked into big name first baseman for the long term. Other potential suitors like the Mets and Dodgers are enduring what might be politely termed severe financial problems, effectively removing them from the marketplace. The Cubs are rebuilding with a new GM who doesn’t want to sign big money players who might be in decline just as the rest of the team is finally getting good. And who the hell knows what the White Sox are doing?

The chances are that Fielder will end up with one of the following six teams.

The Fit: The Rangers make the most sense. They’ve played in the World Series two years in a row, losing both times and they did it last year with the mediocre Mitch Moreland’s contributions at first base. Moreland hit .259/.320/.414 last year and that was with the benefit of a notoriously hitter-friendly park. Imagine what Fielder could do in Texas. It boggles stuff.

Can they afford it? The Rangers payroll is over $100 million but nowhere near the upper echelon of the league. They still have to sign Yu Darvish and pay the $50+ million posting fee as well, so this might be a difficult off-season for them to add another $100 million player. Still, a lot of money comes off their books next year, so assuming they aren’t re-signing everyone, any additional dollars could be limited to this season.

Chances: Pretty good. This seems like the best and most obvious landing spot.

The Fit: The Giants need hitting. Badly. They have an amazing pitching staff and it’s almost like the Giants front office has decided, well, close enough. Prince Fielder is hitting. The fit is fantastic.

Can they afford it? Baseball Reference estimates the Giants to have a $114 million payroll, well below what they could afford. Adding $20+ million for Fielder would seem to be a smart use of resources. Or, at least, no where near as stupid as signing Barry Zito, Aubrey Huff, Aaron Rowand, or Miguel Tejada.

Chances: Not good if for no other reason than the front office seems allergic to players who can actually hit.

The Fit: The Mariners play in a huge stadium, one that severely holds back power hitting. As a result, the Mariners don’t score many runs. So there is a fit in that sense, though it’s debatable how much Fielder would want to play in Seattle. That said, if the money is there, they’ll make it work. Also, if the Mariners don’t start winning some games, GM Jack Zduriencik might be out of a job. That’s called incentive to win now.

Can they afford it? They can, though with the recent outlays by the Angels and Rangers, one wonders if they should bother.

The Fit: The Nationals need a power-hitting first baseman. The fit depends upon when you think Washington’s window of opportunity to compete opens. If you think they can win in 2012 or 2013, then it makes some sense to take the plunge. If not, there’s no point in taking the chance just to win 80 instead of 75 games.

Can they afford it? Sure.

The Fit: The Jays are a better, smarter version of the Nats. Given their competition, they need to time their window properly and signing Fielder might or might not make sense based on when that window opens. Are the Red Sox done? Are the Yankees too old? Can the Rays hit? These are the questions that will inform any Fielder acquisition. The Jays did bid strongly on Darvish though, so they might be more up for a splash signing than we think.

Can they afford it? Yu Darvish says yes.

Chances: Not that great.

The Fit: Not great. The Orioles are the worst team in their division and the competition isn’t likely to let up anytime soon. Adding Fielder would be nice but ultimately it’s just a thimble of water to a man dying of thirst. That said, they might do it anyway. They’re the Orioles, after all.

Can they afford it? They can afford just about anything except smart management.

Chances: Pretty bad. Why would Fielder want to sign in Baltimore and lose for the next six or seven seasons? The money would have to be much greater than the next best team.

In the end, there are a couple of teams, Texas and Toronto, who would be good fits for Fielder. Both have probably been waiting for his price to drop. The guess here is Fielder ends up in Texas to complete the scariest lineup west of the New Jersey turnpike.