Turn down the Colts right now. 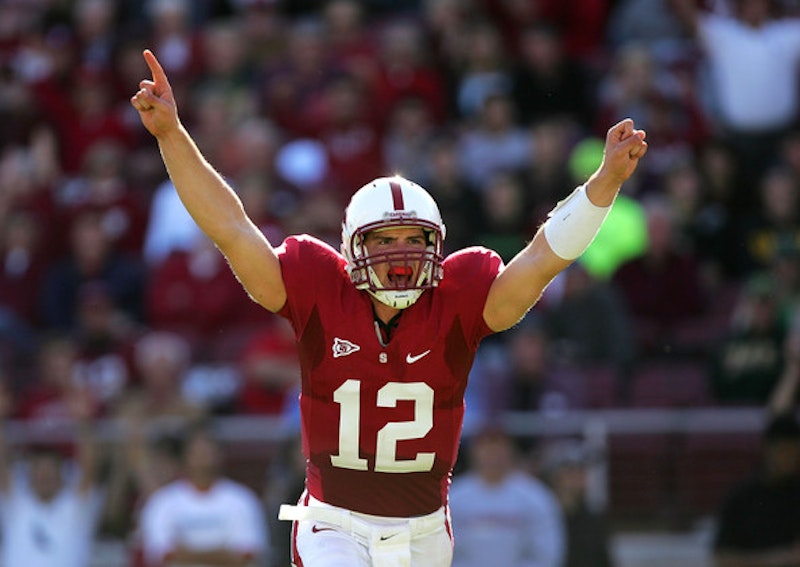 I’m a Baltimore native who’s been regaled with countless tales of the glory of Johnny U. and the Colts by my dad and uncles, grew up without a home team due to the Irsays inglorious midnight escape and generally held the horseshoe in disdain but none of that has anything to do with what I’m about to suggest below. Andrew Luck should refuse to play for the Indianapolis Colts.

Luck is the presumed number one pick in the 2012 NFL draft since he chose to return to Stanford for his senior season and bypassed the 2011 NFL draft. Speculation about Luck going to the Colts has consumed NFL talk all season save for the six weeks of midseason Tebow-mania. The Colts, who lost uber-QB Peyton Manning to neck surgery prior to the season, finished an NFL worst 2-14 and thus have been awarded the top pick in April’s draft.

The Colts have been a perennial playoff team during Manning’s tenure. In Peyton’s absence the team nosedived from a Super Bowl contender to a dumpster in mere months. There have been a number of excuses bandied about to explain the Colts struggles; first the team was built around Manning with a fast defense built to play with a lead; and second, the front office hasn’t drafted well over the past few years and the team was prime for a fall regardless of Peyton’s health. Either way, Indy is a terrible situation for a young quarterback, even the supposedly can’t-miss Luck. The team is currently operating with a lame duck coach and without a General Manager as the Polians, Chris and Bill, were dismissed following the dismal season.

If the Colts really are built around Manning’s special talents then Luck shouldn’t want any part of that mess. Luck would have the pressure of not only replacing a living legend but also doing so in a system and with a roster crafted around that legend. Couple that with the belief that the team isn’t as talented as it was just a few years back and Luck could find himself in an untenable situation; high expectations with a bad supporting cast. Or worse yet, sitting behind Manning for two or three years should the Colts make the ultimate mistake of keeping both quarterbacks on the roster.

Andrew Luck looks to be John Elway 2.0. He should follow Elway’s footsteps in one other way and tell the Colts “Thanks, but no thanks.” Elway was drafted by the then-Baltimore Colts with the top pick in the 1983 draft. The quarterback refused to play for the Colts and eventually forced a trade to Denver, after a summer playing minor league ball for the Yankees. Luck should take the hint from Elway and Peyton’s brother Eli, who told the Chargers he wouldn’t play for them when he was the top pick in the 2004 draft.

Luck holds all the cards here. It’ll be the last time he has any power over the team that drafts him until he reaches free agency. Luck should act in his own best interest and let Peyton Manning deal with the mess that is the Indianapolis Colts. Washington or Miami would no doubt pay a fortune to acquire Luck, and provide him with a better chance to succeed.