What's Best For the Washington Redskins in 2012?

Finding a quarterback would be a good start. 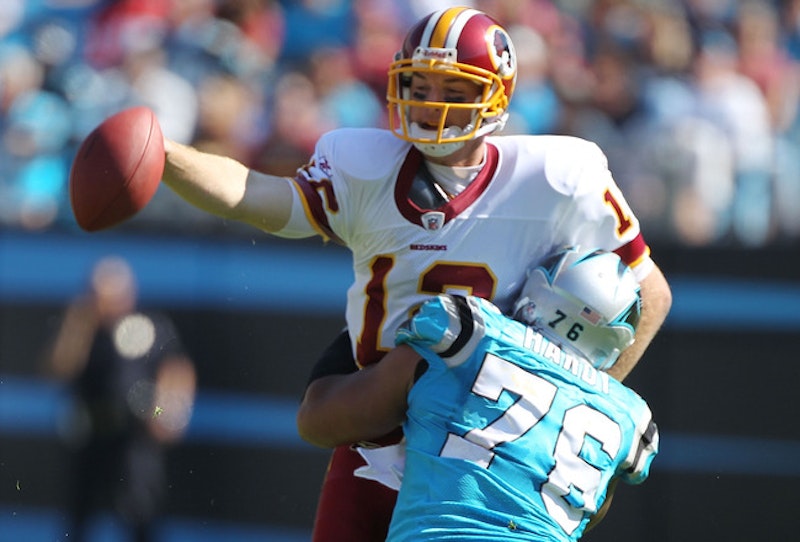 It’s been widely speculated that the Washington Redskins, who’ve got the sixth pick in the next NFL draft, will draft a quarterback. That make sense considering two facts: 1) the 2012 draft is heavy on high end quarterback talent, and 2) the Redskins really haven’t had a franchise quarterback since Joe Theismann in the early 1980s. Seriously. You could say the Skins are sorely in need of a good quarterback. The franchise has managed success in the past without one, but winning in the NFL is so much easier with a great (or even good) quarterback. So, considering they don’t have anything close on the roster, the Redskins should clearly draft one. Except, they might not.

What if Mike Shanahan’s team wins five or six games again next season? After 10 losses two seasons ago and 11 this year, he’s probably out of a job. You don’t hold on to a head coach who has won six, five, and then six games in his three seasons with the club. Maybe, considering his exorbitant contract (five years at $35 million), Redskins owner Dan Snyder would resist firing him. Maybe Shanahan is so secure in his contract and in his relationship with Snyder that he isn’t remotely worried about losing his job.

But I doubt it. Shanahan needs to win some games next season. He probably needs to make the playoffs to keep his job. That’ll be very hard to do with a rookie quarterback under center.

This year, five rookie quarterbacks played a significant amount for their teams; Cam Newton (Carolina), Andy Dalton (Cincinnati), Tim Tebow (Denver), Christian Ponder (Minnesota), and Blaine Gabbert (Jacksonville). Both Tebow and Dalton’s teams made the playoffs, but more because their teams were strong in other areas as opposed to anything they did. Newton has been excellent but even his play has been marked with game destroying mistakes. Ponder and Gabbert might be good one day, but they’re awful now. NFL quarterback is simply too difficult a position to master in one training camp. Almost nobody can do it. It takes a year, sometimes more, to figure things out enough to just have the opportunity to play well.

Yes, some rookies step in and play well from the very beginning, but the vast majority doesn’t. Even Peyton Manning wasn’t very good as a rookie, and he is one of the greatest quarterbacks in NFL history. I’m old enough that I remember Troy Aikman—who won three Super Bowls—as a rookie. He was awful. With that history staring him in the face, combined with the reality that he needs to win games next year, I have to ask, are what is best for Mike Shanahan and what is best for the Washington Redskins two different things?

There have been rumors that the Redskins will look at Peyton Manning should the Colts decide to spend their number one overall pick on a quarterback. I’m sure we’ll hear the Redskins connected to other veteran quarterbacks as the off season begins, if for no other reason than those are the players who they’ve typically gone after decade after decade.
But if the Redskins actually do anything but bring in a very talented rookie quarterback next year it’ll be clear that Shanahan’s incentives weren’t in line with the team’s. The Redskins have lost a lot of games over a lot of years. The roster has improved recently, with better depth and a younger team. That is Shanahan’s doing. But they are not good. The quickest way to stay competitive in the NFL is to draft a great young quarterback. After decades of losing, the Redskins desperately need one. I’m just not sure Mike Shanahan is in a position to make that happen.