The author kicks off the 2011-12 NBA season with a few storylines to watch. 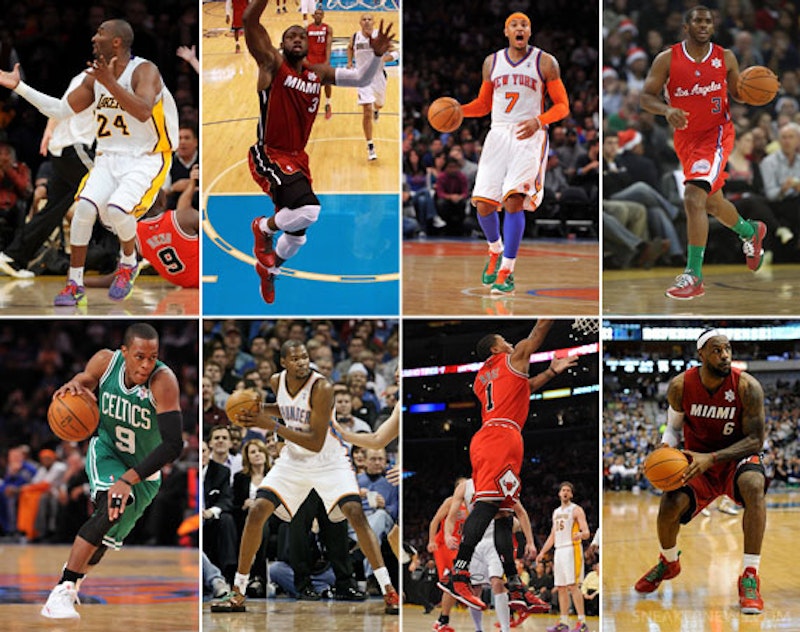 Basketball season is finally upon us, and not a moment too soon. After a flurry of post-lockout trades and signings, the players are finally out of court and back where they belong—on the court. The ’11-’12 season jumped off on Christmas Day with an impressive slate of games, each of which raised more questions than they answered. Going game by game, here are a few storylines to watch this year.

Neither of these teams were at full strength (few teams are) with new Knick Baron Davis out with a herniated disk and Celtics stalwart Paul Pierce day to day with a bruised heel, so it’s tough to draw too many conclusions—though one thing is for sure: This has officially become a grudge match. New York seems to have closed the gap between themselves and the Celtics, though the unforgiving hands of time may have had a role in it. Youth is officially on the Knicks side, and though there are still a few roster holes, the moves to add Tyson Chandler and Baron Davis could propel New York to a finals run this year, with room for improvement in the future. Davis thrives on good teams and could be the vocal floor leader the Knicks need, without too much pressure to initiate the offense.

The Knicks have Carmelo Anthony for that, not to mention Amare Stoudemire. The latter was leading the league in scoring before they dealt for Melo, but has adapted quite well to being the secondary option. Many assumed the pair would be a deadly pick and roll combo, but Amare has actually been the screener more often—spacing the offense and utilizing his range. When this team settles in and gets all their pieces together, watch out: every game is going to be a high scoring battle.

I’m a Lakers fan, and this game was U-G-L-Y. As a friend texted me from the Staples Center: “It almost would have been better if they blew us out.” Instead, the Lakers choked away a six-point lead in the last minute, turning the ball over multiple times, picking up lousy fouls and handing the victory to a team that may very well be the class of the Eastern Conference.

Kobe Bryant looks as brilliant as ever, but even before the Chris Paul debacle this was going to be a challenging season. I don’t want to get into it (FUCK YOU DAVID STERN), but that travesty was just the icing on the cake—forcing the Lakers to give Lamar Odom away, shaking Pau Gasol’s confidence and making a Dwight Howard deal a near necessity. The team needs to get shaken up, Bynum needs to stay healthy, Kobe needs to be super human… There are just too many things that have to break the right way for the Lakers to get back to the Finals this year.

Chicago looks to be a complete team. If I were a gambling man, they’d be my title favorites. Reigning MVP Derrick Rose and center Joakim Noah are one of the most dynamic young duos in the league, emphasizing the sort of tough-minded defense that used to be the Celtics signature. Rip Hamilton was a great pick up and Luol Deng is quietly blossoming into an excellent player (making the winning play in this game, out hustling Pau Gasol to snatch a Bryant lob). They led the league in regular season wins last year, and they’ve only gotten better. Maybe that’s what made this loss so painful—it was pretty clearly a matchup between a team on the rise and a team in a tailspin.

The Heat steamrolled the Mavericks in a re-match of the finals, but I don’t think you can take too much away from this one. Miami looks like a team with something to prove, but no amount of regular season dominance is going to quell the talk that Lebron James defers too much in the biggest moments. Who leads this team—Lebron, or Dwayne Wade? Will the Heat embrace their roles as villains this year? Can their superstars make up for their lack of depth? We won’t know until June.

Dallas is dealing with a share of doubt too, and not many are giving them a chance to repeat. I’m tempted to write off their title as somewhat fluky, but the fact is, this is a very, very good team that just may have gotten better by virtue of the Lakers gifting them Lamar Odom. Motivation shouldn’t be an issue for the scorned forward, nor the disrespected champs.

The Magic are talking like they’re going to retain Dwight Howard, but with the rest of the roster looking weak and not much relief in sight, I doubt they’ll be able to re-sign him—so they should deal him. To the Lakers. Okay fine, that’s being a homer, but I don’t think there’s a better player on the table than Andrew Bynum, and it’d be better to get something for Howard than nothing. And, until they deal him, the rumors will hang over the team like a pall.

The Thunder stand in stark contrast. They have a happy young superstar in Kevin Durant, one of the game’s most explosive point guards in Russell Westbrook and hyped third year shooting guard James Harden—not to mention a guy who is rapidly becoming one of my favorite players, Serge Ibaka. There are a number of teams who could win the West this year, but they have as good a shot as any, and the brightest future of the bunch.

Their questions are all good ones. Can Durant lead the league in scoring again? Will Harden’s remarkable efficiency continue with increased minutes? Can Ibaka really block five shots a game? Can Kendrick Perkins avoid murdering fools?

As much as I hated the league rejecting the Chris Paul to the Lakers deal after it’d been announced, I’m still glad he landed on the other Los Angeles team. They’re already calling LA “Lob City,” and for the first time in just about ever the Clippers are relevant. It’s tough not to root for Paul, Blake Griffin and Chauncey Billups, and if this game was any indication, they’ve got as good a chance as anyone to run away with the division and the city. Do they look better on paper than the Lakers? Yeah, but they have to take the crown.

The Warriors also have a few great young players, and were in the bidding for Paul. Stephen Curry and Monta Ellis are two of the best pure scoring guards in the league, and David Lee is another statistical beast. The team lacks defense, but they can run with anyone on any given night. They’ve got the flight, but do they have the fight?

I look forward to finding out.