Who The Hell Is Sam Fuld?

How the Cubs overlooked a great player. 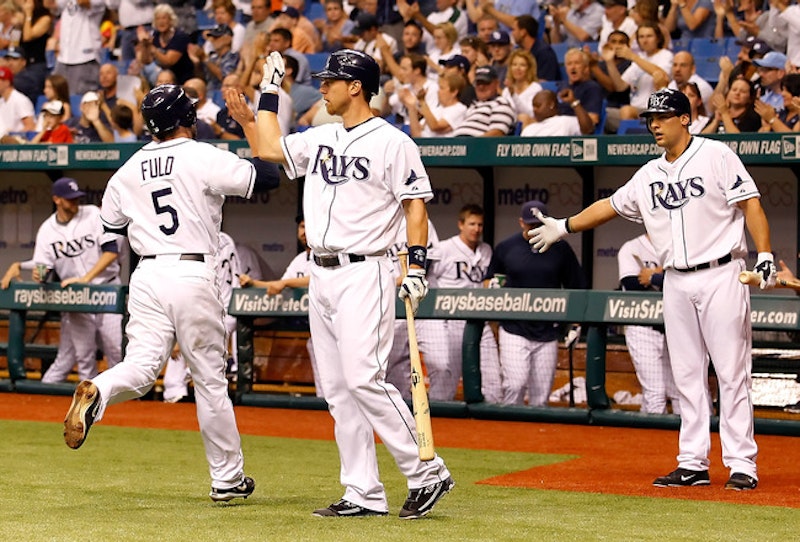 If you're not a baseball geek or Cubs fan, you probably never heard of Sam Fuld prior to April 11. It was on that night that Fuld went four for six with three runs, three RBI and a homer in a nationally televised 16-5 Rays win over the Red Sox. Fuld's breakout performance was surely a downer for the Fenway Faithful but it was yet another example of Tampa Bay finding treasure in another team's trash bin.

Fuld was dealt from the Cubs to the Rays as part of the Matt Garza trade. In most cases the deal was reported as Garza for four prospects and Sam Fuld; the outfielder was considered by most to be nothing more than waiver wire fodder. Fuld had been a solid player for the Cubs organization, earning a couple of late season promotions to the Majors. He was speedy, a fearless defender and patient at the plate. Fuld was the kind of guy who didn't do anything particularly well but always hustled and never had a clean uniform.

There was simply no room for a speedy gamer in the Cubs’ crowded and expensive outfield. With Alfonso Soriano, Marlon Byrd and Kosuke Fukudome all signed long-term, Fuld looked like a fourth outfielder at best. He may have faced the same fate in Tampa if not for Manny Ramirez's epic bout of stupidity. When Ramirez retired rather than face a league-imposed 100 game suspension, Fuld became the instant beneficiary. Thrust into the lineup to replace a power hitting legend Fuld has produced at an All-Star clip; in 85 plate appearances this season (through Sunday) Fuld sports a .901 OPS, 10 steals and 13 runs scored.

In retrospect, the inclusion of Fuld in the Garza trade was likely viewed as more than just a throw-in by the Rays’ front office. I'm currently reading Jonah Keri's terrific new book, The Extra 2%, which is an in-depth look at how Tampa's management team brought Wall Street concepts to MLB with bona fide results. In reading the book I'm learning that Tampa, led by GM Andrew Friedman, doesn't do anything by accident. While many people in baseball circles viewed Sam Fuld as a fringe player with no power, Friedman probably saw him as a superior defender with excellent on-base skills who was so undervalued he could essentially be acquired by saying, "Hey, how about you guys throw in Sam Fuld?" As Branch Rickey said, "Luck is the residue of design."