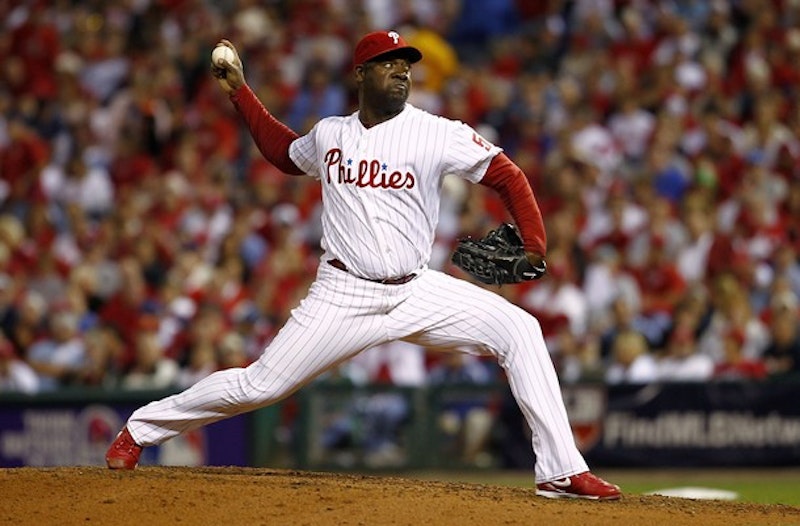 When Phillies closer Brad Lidge went down with a strained rotator cuff in Spring Training it created a great deal of uncertainty for the odds on the NL favorite. Philadelphia could line up four aces but who would hold down the fort in the late innings? The most likely candidate was Ryan Madson, who had filled in at closer, with dubious results, during Lidge's previous DL stints. The thought of Madson closing games no doubt made legions of Phillies fans uneasy. It apparently made manager Charlie Manuel uneasy as well.

Madson has established himself as one of the National League's top set-up men. He has the electric stuff and tall, lean build that gives him the look of a closer. Unfortunately, in 21 chances to save a game with a ninth inning lead over the past two seasons Madson has coughed up the lead six times. For a team with dominant starting pitching and title hopes the 2011 Phillies simply couldn't really on Madson as closer on a consistent basis.

Late in Spring Training, Manuel announced that he was skipping Madson and would use 39-year-old veteran hurler Jose Contreras as his closer in Lidge's absence. It was a bold move and one that was met with skepticism. Sure Madson was volatile in the ninth but Contreras was pushing 40, at the least, and presumed to be washed up. Thus far Contreras has been a revelation for the Phillies. As of last weekend, the big Cuban righty has notched five saves in as many chances. He's yet to allow a run in eight innings this year and has struck out nine while yielding just four hits.

Contreras' success this year shouldn't come as a complete surprise. He was a solid contributor to the 2010 club. After signing to be a long man out of the pen, Contreras became one of Manuel's most trusted bullpen options by season's end. He posted a 3.34 ERA in 56 innings. It was his lowest ERA since 2003, his first year in the Majors.

The move to the bullpen has given new life to Contreras' career. He had steadily declined since 2005 when he won 15 games and made the All Star team as a member of the World Champion White Sox. He posted ERAs over 5.00 in 2007 and 2009, prompting the White Sox to deal him to Colorado. The move to Colorado for the stretch drive in 2009 looked like it might be the last hurrah for Contreras. Instead he embraced the role and posted respectable numbers for the Rockies.

If Contreras can keep up his stellar work, coupled with Lidge's successful return from his rotator cuff injury, Manuel will have options at closer. A backend of Madson, Lidge and Contreras will allow the Phillies to shorten games, making the effect of those four aces even more devastating. The moral of the story for Philadelphia's opponents is to hit Joe Blanton when you have the chance.