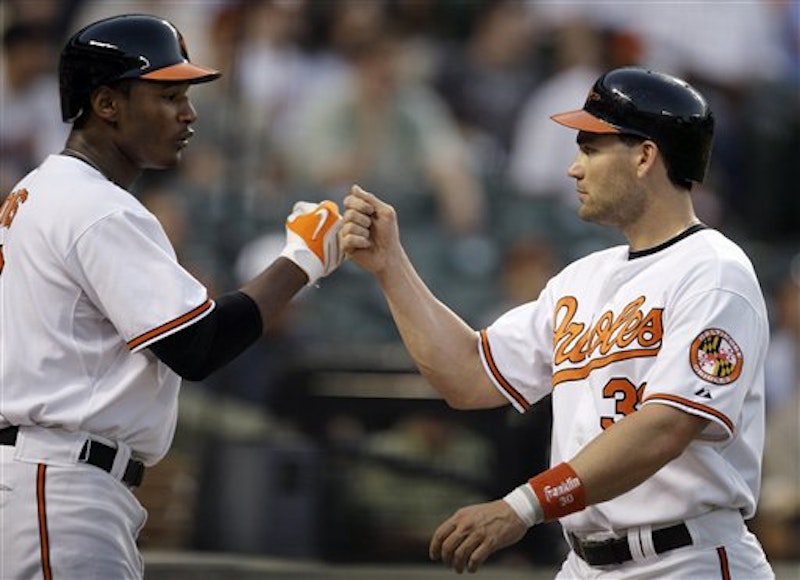 As the Baltimore Orioles entered Spring Training infielder Robert Andino was an afterthought. He was out of options and, on a team that expected Brian Roberts to be healthy, had just traded for JJ Hardy and re-signed Cesar Izturis, didn’t figure to get much playing time. However, Andino showed versatility and strong defense and won a job on the Opening Day roster as the team’s utility infielder. Andino seized the opportunity when starting shortstop Hardy was injured only a week into the season.

At one time Andino was one of the Florida Marlins most heralded prospects. He made his Major League debut in 2005 for Florida when he was just 21 years old. Following the 2005 season the Marlins dealt for another 21-year-old shortstop, Hanley Ramirez. Needless to say Andino was quickly surpassed by Ramirez and spent the next three seasons bouncing around Florida’s system as well as the diamond. Ultimately the Marlins traded him to Baltimore for another former top prospect, Hayden Penn.

Andino spent the 2009 season as the Orioles’ utility infielder. He showed flashes with the glove but not much with the bat and seemed prone to mental lapses. He was sent to AAA Norfolk to begin the 2010 season and showed surprising pop as he clubbed 13 homers and drove in 76. Upon returning to Baltimore near the end of the 2010 season, Andino posted a very solid .792 OPS in 66 plate appearances. His production has been just as solid so far in 2011 filling in for the injured Hardy. He’s also dazzled with the glove.

Assuming Hardy returns from injury to post a solid May and June he could be trade bait come July. Hardy is an impending free agent and figures to draw the attention of several contenders who could use a solid addition at shortstop, most notably the reigning World Champions. Miguel Tejada is the Giants’ current shortstop; and by shortstop I mean that he stands between second and third base with a glove on his hand. His range has eroded, his arm is erratic and he’s putting up a woeful OPS so far this year. Hardy would be a huge upgrade for San Francisco and Andino could serve as the perfect bridge to Machado.