What to expect from Maryland's new basketball coach. 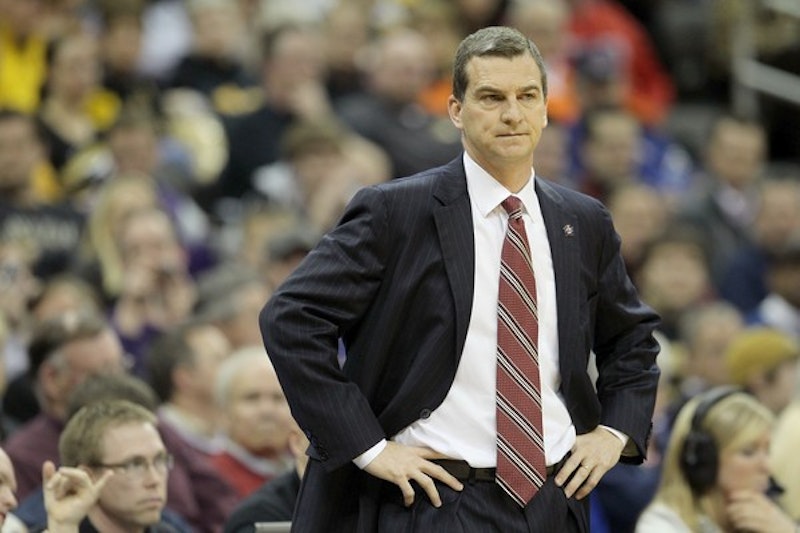 Mark Turgeon has the unenviable, albeit lucrative, job of replacing future Hall of Famer Gary Williams as Maryland’s basketball coach. I’ll admit, as a lifelong Terps fan the name Mark Turgeon was not on my short list of dream candidates to replace Williams. In fact, when I first heard his name my response was; who the hell is Mark Turgeon?

Upon further inspection Turgeon seems to be a very solid hire. I’ve read many reports about Turgeon not being a sexy name. Who cares? I don’t need my basketball coaches sexy. Win games and stay in the good graces of the NCAA and you’ll do just fine. Williams managed to do both for the past 22 years leaving behind very large sweat soaked shoes for Turgeon to fill.
I understand that there is a bit of a letdown with Turgeon’s hiring after the frenzy surrounding Sean Miller of Arizona over the weekend. According to numerous reports and Twitter posts, Miller to Maryland was all but a done deal. Miller was fresh off the thumping of Duke in the NCAA tournament and the thought of pasting the Blue Devils on a regular basis had Terps fans giddy with anticipation. Something happened on the way to College Park and Miller decided to stay in Arizona, after signing a huge contract extension of course. It’s likely that Miller simply used the Terps as leverage for a better contract.

There were certainly some big names linked to the Maryland job. In hindsight it looks like the rumors of Miller, Mike Brey, Jay Wright and Jamey Dixon interested was the stuff of hopeful or delusional Internet message board posters. Frankly, besides Miller I wouldn’t have been all that excited by any of the names mentioned above. Brey has local ties but has been no more successful than Turgeon. Wright has the flash and is a great recruiter but his teams usually flop in the tourney. Dixon typically recruits hard working overachievers who struggle against better athletes in March.

As for Turgeon he is a proven winner. He’s a Kansas native with Jayhawk basketball in his DNA so he certainly has the pedigree. He managed to get to a Sweet 16 with Wichita State. Yes, that Wichita State. He left Wichita State to take the head job at Texas A&M; a football school in football crazed Texas.  Turgeon managed to take the Aggies to the NCAA tournament in all four of his seasons at the helm. His teams averaged more than 24 wins per season while battling the likes of Kansas, Kansas State and Texas in the competitive Big 12. He may not be a sexy name, but that track record of success should have Terps fans excited.
Through his Twitter account Turgeon expressed that being in the fertile recruiting ground of the Baltimore-Washington corridor was a major draw. One of Gary Williams’ biggest criticisms in recent seasons has been his inability or seeming unwillingness to attract top in-state recruits like Carmelo Anthony, Rudy Gay, Kevin Durant, Michael Beasley and Nolan Smith. Maryland

Assistants Bino Ranson and Rob Ehsan have reportedly made progress in the area. If Turgeon is able to retain Ranson,  Ehsan or both, and establish a pipeline for in-state talent to go to Maryland people will soon forget about the sexy names that didn’t take the job and be thankful for the coach who did. Welcome to Maryland Coach Turgeon. Here’s hoping you turn “Garyland” into “Markland.”