Who is the Basketball GOAT? 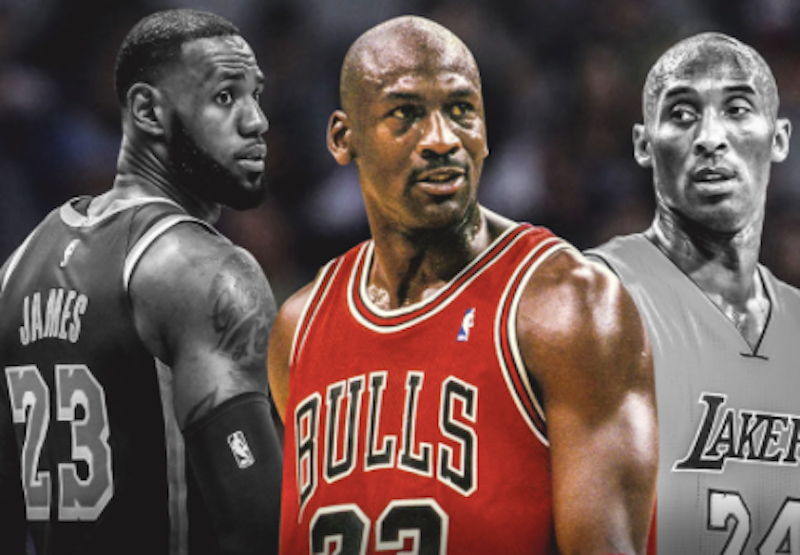 Now that LeBron James has won his fourth NBA title the conversation can begin in earnest. Is LeBron the GOAT? He blends the scoring punch of Michael Jordan, the passing skills of Magic Johnson and the brute strength of Karl Malone. He’s appeared in 10 NBA finals and has won four of them. He’s the first player to lead three different teams to a championship. He’s number one in career playoff points and steals. He’s second in career playoff assists and three-pointers. He’s won Finals MVP four times.

Critics complain LeBron isn’t a clutch player. Statistics defy this perception. LeBron’s Game 7 scoring average is 34.9 points per game, highest ever. His Game 7 career record is 6-2. He has more game-winning playoff buzzer beaters than Michael Jordan and Kobe Bryant combined. The list for NBA GOAT is short. Here’s how LeBron stacks up against the competition.

Bill Russell won 11 championships with the Boston Celtics. This will never be topped. In Russell’s era there were nine teams and two playoff rounds. Today there are 32 teams and four playoff rounds. Russell played with eight future hall-of-famers. LeBron has played with only two likely hall-of-famers in their prime (Dwyane Wade and Anthony Davis). Russell had a legendary coach in Red Auerbach. LeBron has had five first-time coaches. Russell had two rivals: Wilt Chamberlain’s 76ers and the Jerry West/Elgin Baylor Lakers. LeBron’s rivals include Kobe Bryant, Tim Duncan, Stephen Curry, Kevin Durant, Kevin Garnett, Shaquille O’Neal and Dirk Nowitzki. Russell was fantastic but he thrived in a watered-down league. LeBron gets the edge here.

Kobe Bryant won five NBA titles, one League MVP and two finals MVP Awards. LeBron has one less title, but three more finals appearances. Kobe’s career scoring average is 25; LeBron’s is 27. Kobe was a better defensive player but LeBron leads Kobe in every major statistical category: rebounding, assists, steals, three pointers, triple-doubles. They never met in the Finals, but faced each other 22 times in the regular season. LeBron’s record against Kobe was 16-6. In a strange sequence of events, Kobe’s fatal helicopter crash occurred less than 12 hours after LeBron passed him on the all-time scoring list. The two will always be linked, but LeBron gets the edge.

Kareem Abdul-Jabbar went to 10 NBA finals and won six of them, two more than LeBron. Had he entered the league straight from high school like LeBron, he’d probably have more championships. Like Russell, Abdul-Jabbar was surrounded by future hall-of-famers including Magic Johnson, James Worthy, Jamaal Wilkes, Bob McAdoo and Oscar Robertson. Abdul-Jabbar is the all-time scoring leader and his skyhook was the most potent shot in NBA history. LeBron is on pace to pass Abdul-Jabbar’s scoring record if he averages 25 points a game for two more years. Again the edge goes to LeBron.

Magic Johnson took the Lakers to nine championships, winning five. He did this in the Larry Bird era, elevating the accomplishment. Magic averaged 11.2 career assists per game, best ever. He had 30 playoff triple doubles to LeBron’s 28. Magic was a three-time league MVP and a three-time Finals MVP. LeBron has won league MVP twice and Final MVP four times. Magic defeated Bird in two of three NBA Finals but came up short against Jordan’s Bulls in the 1991 Finals. LeBron gets the edge over Magic.

The final candidate is Michael Jordan. Jordan retired in 2002, a year before LeBron’s first season. He was 6-0 in the Finals and won six Finals MVP awards. Add this to five League MVP Awards, nine All Defensive Teams and 15 All NBA Teams and it’s easy to see why Jordan is considered the greatest baller ever. During his rise to the top, he defeated the best players of his era. They include Patrick Ewing, Larry Bird, Magic Johnson, Charles Barkley, Karl Malone, Clyde Drexler, Reggie Miller, Gary Payton and Isaiah Thomas.

Jordan intimidated opponents, teammates and referees. Coach Phil Jackson said he was the greatest leader he’d ever seen and was a master “at controlling the emotional climate of a game.” Jordan superseded basketball as a marketing sensation, movie star (Space Jam) and tennis shoe entrepreneur.

A more telling yardstick is how their teams played after they left. During his first stint with Cleveland, LeBron took the Cavaliers to five straight playoff rounds including the 2007 Finals. After LeBron left Cleveland in 2011, they had the worst record in the league. LeBron led Miami to four straight finals, winning two of them. After LeBron left the Heat in 2015, they failed to make the playoffs.

By comparison, Jordan’s Bulls excelled after Jordan left to play baseball in 1994. The Bulls made it to the conference semifinals without Jordan in 1994 then finished third in the conference in 1995 before losing in the playoffs (even after a surprise return from Jordan). After Jordan left the Bulls in 1998, they went from NBA Champions to the worst record in the Eastern Conference, but the Bulls also played without Scottie Pippen, Dennis Rodman and Coach Phil Jackson.

Filmmakers captured footage of the 1998 Chicago Bulls season, Jordan’s final championship. For nearly two decades, ESPN wanted to make a documentary with the material. Jordan wouldn’t consent to use of the footage. Only after LeBron won a championship with the Cavaliers in 2016, did Jordan finally give permission. Clearly he was hearing LeBron’s footsteps and wanted to remind fans that he was the true GOAT. The resulting film The Last Dance offers a close look at Jordan’s ruthless competitive nature.

This killer instinct is what gives Jordan an edge over LeBron in the GOAT conversation. Seeing Jimmy Butler of the Miami Heat score at will over LeBron in the 2020 Finals, it’s clear Jordan would’ve done the same and more. But Jordan couldn’t have stopped LeBron either. His only chance would be penetrating LeBron’s psyche with trash talk, similar to what Draymond Green of the Warriors was able to do.

If the conversation ended today, Jordan would retain the mantle as GOAT with LeBron a close second. But LeBron’s legacy isn’t over. If he stays healthy and wins a fifth championship in 2021, then LeBron truly will become King James.