The NBA’s Struggling With Ratings, and Don’t Mind

Taking it on the chin. 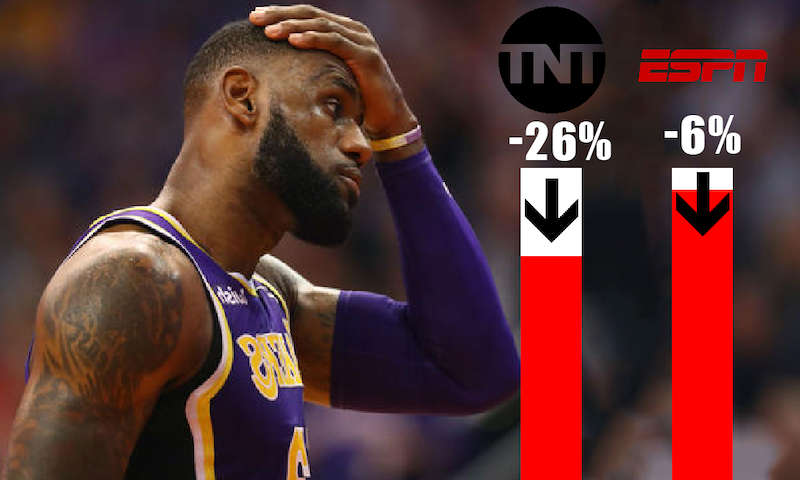 From 2015 to 2017, the NBA Finals viewership sat between 17 and 21 million viewers. While this is far from the almost 100 million that the Super Bowl draws annually, it’s a few strides ahead of the World Series average 11 million.

This period showed growth for the NBA, as their ratings ticked upward year by year, with viewership for finals games growing in some cases by three million from year to year. This trend peaked, reasonably, with the 2016 finals game 7, one of the most anticipated NBA games in recent memory. The matchup drew 31 million viewers. This peak may make sense, but the sharp drop-off afterwards didn’t. The 2017 and ‘18 finals peaked at 18 million viewers each, while the 2020 finals peaked at only nine million viewers.

Most fans point to the NBA’s outspoken nature, and their encouragement of players expressing their thoughts on politics, racial injustice, and voting access. This issue has been present since 2014, but was front and center this year. It’s worth noting that some of this drop-off could be related to the games themselves.

In the period from 2015-2017, the Cleveland Cavaliers met the Golden State Warriors in all three matchups. These were largely seen as duels between superstars Stephen Curry and LeBron James, leading to heavy fanfare and promotion. By 2017, the Warriors had transformed into the much criticized “super team” version of themselves with the addition of Kevin Durant. In the 2017 and 2018 matchups, the lopsided nature showed, with 2018 decided in just four games.

In 2019, LeBron James missed the NBA Finals for the first time in a decade and the ratings reflected this. In 2020, James returned to the finals, and won in a series that went six out of seven possible games. On paper, ratings similar to 2017 should’ve returned, but in the midst of a pandemic, mass unrest, and an election, the NBA drifted out of many peoples’ minds. The shared presence of the NFL and MLB didn’t do the NBA any favors, either.

Even considering these factors, it stands to reason that the finals may have succeeded considering how many Americans are at home more frequently. This is where the NBA took its biggest hit yet. The ratings drop-off this season was linked to the league’s insistence on not distancing itself from politics. Players wore messages of equality on their jerseys, courts were surrounded by graphics with similar messages, and countless public figures recorded videos promoting this message, along with wearing a mask.

In the aftermath, League commissioner Adam Silver has reportedly expressed surprise, but admitted that the presence of social issues most likely lead to the ratings. The NBA has conducted an experiment with the 2020 NBA bubble, and not just in their successful COVID-19 mitigation strategy. The idea of keeping politics out of sports has been a major topic of debate since Colin Kaepernick’s kneeling in 2016. The debate has flared since, but we now get a look at what happens when a league shamelessly takes a side in the debate.

The ideology of Laura Ingrahams’ now infamous “Shut up and dribble” comments neglect players’ humanity. The idea that in the age of social media, a public figure will keep their ideas totally to themselves is unrealistic, and there isn’t any real precedent set that should make them feel they need to. What’s so strange about this debate is the sense of agency fans feel. Fans of the NFL claim that the Kaepernick issue upset them, but many of the same would scoff at the idea of just not watching football. In sports, many voice discontent as if they’re “owed” a certain version of the league and players they’d like to see.

The issue is far more specific than other businesses. In sports, the players on the field or court are what’s sold, more specifically, the rights to televise this. As the “product” they’re selling hinges on real people rather than inanimate objects, simply ignoring change isn’t a real option. If the players change, and want to express this, the league has three options: allow the players to voice opinions at work; not allow it; or attempt to walk the line between the two.

Time will tell which of these methods is the most effective. The MLB, NFL, and NHL have all chosen the third option thus far, while the NBA has embraced the first option. I’ve never been prouder of a league for handling a situation. I can’t watch a person’s work (in this case, basketball) and then not at least hear what they have to say afterwards. Fans are under no obligation to agree with what these athletes say, so it’s not something that bothers me. Millions disagree with me. Maybe the NBA will return to its high ratings next season. Maybe it won’t. Either way, we’re seeing the first major sports league actually plant its feet on the issue and face the consequences.