The one-time butt of sports jokes gets last laugh. 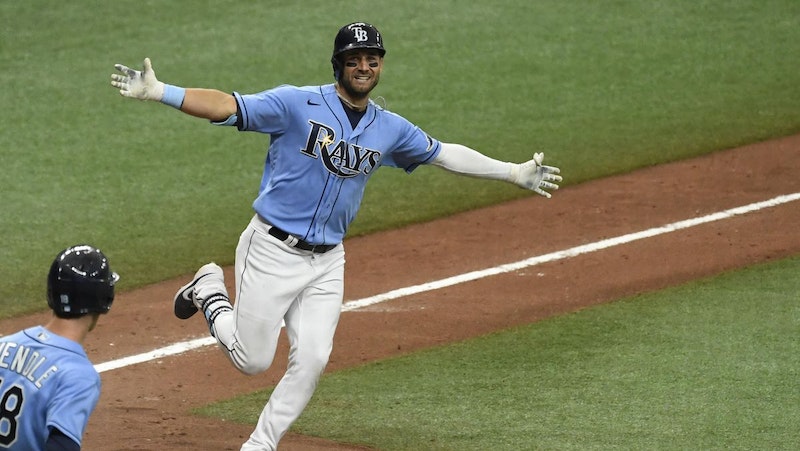 There was a time when Tampa, FL, was the ghetto of American professional sports. The NFL’s Buccaneers wore hideous orange and white uniforms that made TV viewers adjust the color knobs on their sets. They were doormats desperate for wins that never came in a stadium called The Sombrero that was just blocks away from some of the most popular strip clubs in this hemisphere. Tampa also had a great goth dance club in its Ybor City neighborhood called The Empire where fishnets and clove cigarettes were the norm in the 1990s. But that didn’t help the Tampa Bay Mutiny of Major League Soccer stop its death spiral that saw the franchise dissolve after five seasons from 1996 to 2001.

Not to mention the Tampa Bay “Devil Rays” of Major League Baseball, a team that in 2001 when the Mutiny packed up its offices, went 62-100 in another season of futility in a domed facility more appropriate for truck pulls and indoor motocross than baseball. Also, the early years of the Tampa Bay Lightning of the National Hockey League in the early-1990s. They had a nebulous Japanese ownership group that may or may not have been organized crime. They played in what is now Tropicana Field, then called “The Thunderdome” and finished in last place for the second year in a row. Tampa was an expansion make-buy for many sports leagues, given its population growth and demographic. Every league in sports was threatening to open shop in Hillsborough County, Florida at any given point in time. In 1988, the Chicago White Sox were supposedly relocating to Tampa when their home city sandbagged on a new stadium deal, but ChiSox fans rose up and sent dirty white socks in the mail to the mayor of St. Petersburg and helped kill the deal. Thing is, very few people living in Tampa are natives, so they tend to go to games to root on the visiting teams from Michigan, Ohio, etc. In the underrated 2002 Dennis Quaid movie The Rookie, the Devil Rays seemed to be the race to the bottom franchise that would allow this type of heart-tugging chicanery to be committed to film. Then, of course, the Florida church groups got the franchise to drop the word “Devil” because, well, you know, Satan and all.

Tampa Bay is probably the MLB franchise with the fewest fans, and somehow, in this era of relocation and isolation and disconnection, that’s okay. They’re the perfect pandemic franchise in that regard.

The same night this past weekend when the Tampa Bay Rays clinched the American League pennant by downing the hated league-changing Houston Astros, the Tampa Bay Rowdies of the United Soccer League beat the Charleston Battery to advance to the Eastern finals of the USL soccer championship. It was at the ref’s final whistle I realized the ante had been upped down in Florida. The Rowdies, a revamped version of the old NASL franchise from the Pele era, play their home games in Al Lang Stadium, an ancient baseball park in St. Petersburg that has been reconfigured and recycled for low-level pro soccer. Al Lang Stadium was home to many of Mickey Mantle’s Spring Training hangovers as the Yankees made it their Florida home in the 1950s through the early-1960s. It’s a beautiful facility yards away from the St. Petersburg harbor with great old palm trees surrounding it and a constant Gulf of Mexico breeze blowing through. It was a baseball heaven, of sorts.

When the Rowdies and their socially-distanced fans celebrated on my ESPN+ computer screen, I realized Tampa was truly on a roll. It would be a few hours before the Rays would get the job done, but with the Lightning having won hockey’s Stanley Cup a few weeks ago and Tom Brady having shifted the NFL spotlight on to the Tampa Bay franchise, add the Rowdies possibly winning their league and we have a complete “pivot” in terms of the former sports ghetto city of these United States.

The routine for me if the Pirates are rained out in Bradenton during Spring Training is to drive north and visit the Salvador Dali Museum in St. Petersburg. It’s the only thing that gets me through the despair of a Spring Training cancellation. Same goes in Pittsburgh in early August when my family has an annual mini-reunion on the North Shore, I wander through the Andy Warhol Museum and take in the graphic design genius of the native Pittsburgher Warhola. The Tom Seaver and Pete Rose prints, the fascinating and endless archive of his Manhattan cable-access TV show. It’s an incredible facility and I always fall in love with the goth betty working the gift shop cash register.

When Warhol died in February 1987, I was a reporter at a daily paper in Wheeling, W.Va., less than an hour’s drive from Pittsburgh. I thought maybe Warhol’s funeral in his home city would drawing a crowd of celebrities. It was otherwise a slow news day and I talked my editor into letting me travel to Pittsburgh to cover the funeral. I’d be riding with the photographer, a classic 1970s guy who wore that era’s wardrobe without a shred of irony. He was a Kent State University graduate. On our drive to Warhol’s funeral, I asked him if he was on campus during the famous Kent State shootings. He said he was. But being kind of a bad luck Schleprock type of fellow, he said he missed the whole thing because he was in the darkroom working on his senior project. Oh well, those are the breaks, we guessed. Then, just outside Washington, PA, his Dodge Dart blew a tire. Of course, he had no spare. The cold rain fell on us as we both stared at his ruptured Goodyear on the driver’s side rear, waiting for AAA to show up on the shoulder of Interstate 70. So, we missed the Warhol funeral, which was pretty much a private family event anyway. Most of the celebs turned out at St. Patrick’s in Manhattan in April when there was no cold rain or flat tires or Kent State guys who didn’t have to dodge bullets. Debbie Harry looked fine at the Manhattan Warhol event, I noticed.

Then I recalled a time when the March Madness Final Four was happening in Tampa. I was there on a rogue Spring Training tour and couldn’t find a hotel room anywhere in the bay area. I ended up sleeping in my rental car in a beach parking area somewhere between Bradenton and Sarasota. I woke up at dawn, swam in the Gulf of Mexico, took in a day game in Clearwater, then drove across the state to the east coast of Florida where my mother resided, and swam in the Atlantic Ocean and took in a night game in Viera, FL, that same day. It was a baseball baptism, of sorts, a 6-4-3 double-play christening that has given me blissful anticipation of my Pittsburgh Pirates having the first-round pick in the 2021 draft.