Back from the Dead

U.S. soccer draws at Wales, bring on Panama in Austria. 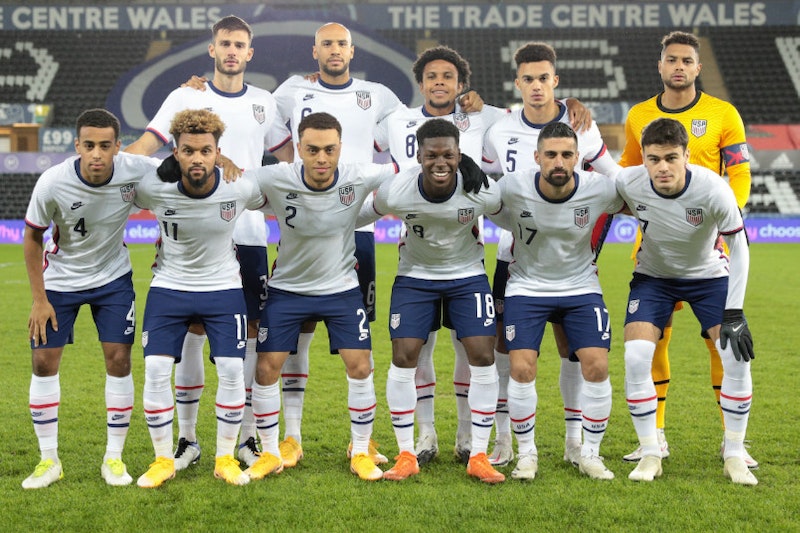 After an interminable absence from the field of play, the U.S. men’s soccer team returned to action Thursday in Swansea, Wales, United Kingdom, for a friendly against the Welsh national team. Seems appropriate the country in the United Kingdom that’s the butt of so many jokes would host the squad from the West that has been the butt of many a soccer joke as well. It was in the cold driving rain and the U.S. sported six different players making their national debuts in a match that would end in a scoreless draw. The team showed plenty of energy and all kinds of effort up front despite not having a legitimate striker to finish some good crosses through the box.

Sergino Dest (Barcelona, age 20) looked great down the right flank. Gio Reyna (Borussia Dortmund, age 18) had some very bold runs in and around the penalty area. Yunus Musah (Valencia age, 17) tore it up out of the midfield. It was as if coach Gregg Berhalter had called up a secret army of youthful JVs to take the place of the aging varsity. And the youth movement, as they always seem to do initially, worked well. For those fans who’ve stuck with this squad for the past few decades, it seems like we’ve seen this new energy before, but never on this scale (paging Freddy Adu). The U.S. probably would’ve scored against Wales had Christian Pulisic (Chelsea hamstring injury) or Josh Sargent (Werder Bremen quarantine rules) been present at Swansea. All of these underage drinkers had but two days to practice together before the friendly, so for the most part, the 0-0 game can be considered a success.

The last time the men’s team played, the American singer/songwriter John Prine was still alive. We weren’t wearing masks. On Feb 24, just 23 days after the U.S. defeated Costa Rica in a friendly, President Trump tweeted that the Coronavirus was “very much under control.”

The U.S. player who scored a penalty kick in that 1-0 victory in Carson, Ca., was named Ulysses Llanez, a native of Los Angeles. He is a 19-year-old Mexican-American who plays professionally in Holland for SC Heerenveen, on loan from Vfl Wolfsburg from the German Bundesliga. He was 18 when he scored his first goal in his first appearance for the U.S. on Feb. 1 of this year, a workmanlike kick slotted to the right corner as the Costa Rican keeper Esteban Alvarado, in his powder blue kit, dived to the left. Who knew that would be the last goal we would see by a U.S. player for the next nine months?

The crowd was somewhat sparse and prematurely socially distanced in Carson on that sunny Saturday afternoon as the youth movement was underway with this goal by teenager Llanez with his slight rockabilly bouffant hairdo. The U.S. had been scheduled to play the Netherlands in a friendly on March 26, Wales in Cardiff on March 30. Both were cancelled as the pandemic rained down. As was the June 4 match against Honduras in the CONCACAF Nations League semifinal in Houston.

“Let my country die for me,” wrote James Joyce in his controversial 1922 novel Ulysses. So, when the U.S. nationals took the field against Wales, Llanez, listed as “Uly,” was among a team with an average age of 22 years and 52 days. The nine-month national soccer layoff was indeed a death of sorts. But holding these friendlies overseas eased the transition for many of our national team players now employed professionally in Europe, unlike previous U.S. national squads that were stocked with ham-and-eggers from the over-expanded Major League Soccer circuit stateside. You try booking a flight from Salt Lake City to Swansea, Wales! Sheesh, over here.

Llanez came in as a second-half substitute against Wales and damn near scored on a long blast that was his first touch. It appears, if Berhalter maintains this roster going forward, that the U.S. has a surplus of weapons that could place us back in the World Cup picture for Qatar 2022.

It was disappointing not to see Manchester United legend Ryan Giggs roaming the technical area as head coach of the Dragons. A few days prior to the international break, Giggs was arrested on domestic violence charges and the Welsh officials thought better of him guiding the team as his case is now pending. Shades of his old pal Wayne Rooney, who knows a thing or two about playing in big games when you are, as Stevie Nicks sings, “on the edge of 17.”

So it’s back on the horse for the U.S. man/child squad as they travel to Wiener Neustadt,  Austria, for a friendly against Panama on Monday, Nov. 16 (2:45 p.m. EST on Fox Sports 1). It’s a tidy 10,000-seat ground (no fans allowed) roughly 55 kilometers south of Vienna. Panama is led by 32-year-old striker Gabriel Torres who has 86 caps and has scored 18 goals for his country. The U.S. has dominated Panama through the years, with an all-time record of 15 wins, 4 draws and 2 losses against them. You’re working from home. You have a “case of the Mondays.” Disconnect after lunch and watch these U.S. kids take on Central/South Americans adjusting to Austrian cuisine and climate. If for any other reason than you can brag “I remember them when they beat Panama in Austria back in November” once the hype train gets rolling again on the latest version of the Baby Yanks.

Outside of the soccer nerd community, these two U.S. friendly matches will go pretty much unseen and ignored. But what we might be witnessing here is a combination of personalities and a germ of dynamism that could capture the nation’s eye if and when these kids pack their bags in November of 2022 under a banner reading “Qatar or Bust!”