Dennis Miller's stint as a broadcaster was a daring experiment. 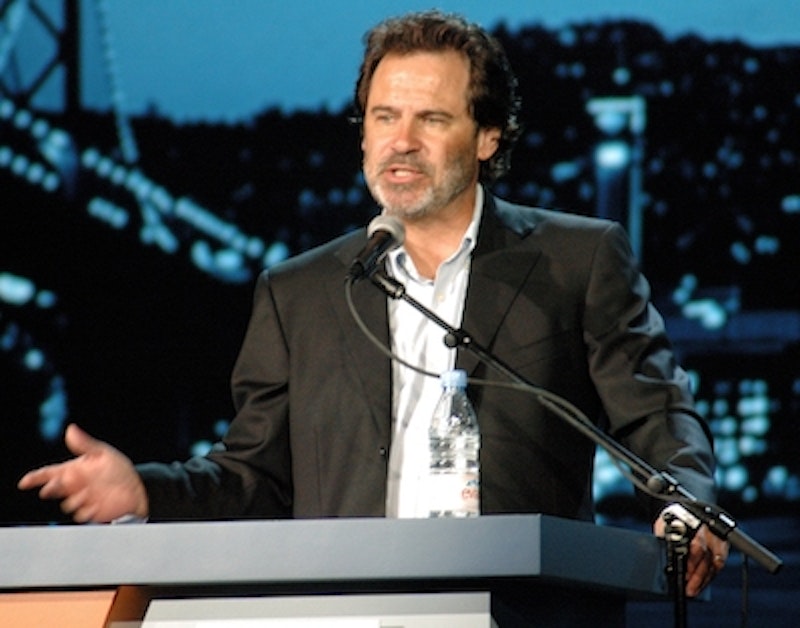 Denver Broncos running back Terrell Davis was getting his ankle taped on the sideline during a September, 2000 Monday Night Football game when a member of ABC's three-man broadcasting team remarked, "Cristo didn't use that much fabric when he wrapped the Pont Neuf." In order to get that joke, a viewer would have to know that Cristo was an artist who traveled the world wrapping monuments, such as Paris' ancient arch bridge, in hundreds of thousands of square yards of gauze. That wouldn't be most Bud-Lite-swilling football fans, but Dennis Miller had his sights set much higher—on aspiring Jeopardy contestants.

The MNF show had become stale, so producer Don Ohlmeyer hired the comedian to join veteran broadcaster Al Michaels and Hall of Fame quarterback Dan Fouts in the booth. Miller, eager for laughs, came out of the gate during the pre-season racing at full speed. Viewers were still trying to decipher his reference to Greek philosophy when he'd toss out another one about Pliny the Elder. Adjusting for the overkill, Miller said he'd recalibrated to a "less is more, babe" approach for the regular season.

But the toned-down Miller wouldn’t adhere to the standard football color announcer patter about receivers achieving separation, and red zone efficiency, although his knowledge of such esoterica was remarkable given that he had no previous football announcing, or playing, experience. The comic's calling card became brainy references like, "I haven't seen anyone rely on the ground game this much since the Battle of Verdun," but he'd also drop more accessible one-liners like, "I've seen women pee standing up with better aim."

How people reacted to Miller's shtick would become a Rorschach test. If you dug it, Miller was adding both entertainment and erudition to a staid broadcast. To the naysayers, the comedian was just a distraction—a bombastic bloviator smitten with his own wittiness messing up their sacred game night with forced cleverness. But despite Miller being as polarizing as Donald Trump, he was a funny guy who could make even his detractors chuckle with jokes like the catchphrase he developed to announce that the game had been decided: "Start blow-drying Teddy Koppel's hair, ‘cause this one’s done."

Ohlmeyer was looking for a zestier alternative to Boomer Esiason's plain commentary, and he succeeded when he gave the former NFL quarterback's job to a professional wisecracker. Miller's hire brings to mind Jonathan Demme's controversial decision to cast comic actor Tom Hanks as an AIDS victim in his 1993 film, Philadelphia. That could’ve gone either way, but Hanks proved his many doubters wrong by winning an Oscar for Best Actor. Miller wouldn't fare quite so well, but he had a much harder stretch to make.

A comedian was in the booth to bring sizzle to the telecast, but perhaps most fans weren’t well-versed enough in the Chaldean dynasty of Babylonia and the ancient writing systems of Mesopotamia to appreciate jokes like this one: "When the hell is Warren Moon going to retire? I mean, this guy is older than the cuneiform in Nebuchadnezzar's tomb." If you detect a forced quality in that quip, so did some of Miller's media critics who were calling for his dismissal. When he wasn't clicking, there was a feeling that Miller had memorized a bunch of "zingers" before the game to shoehorn into the commentary. When he was on his game, however, Miller sounded like a solid color guy with an extra dose of wit.

Adlai Stevenson lost two landslide elections to Dwight Eisenhower, mainly because Americans don't want a pointy-headed intellectual in the White House. That was part of Dennis Miller's challenge in the broadcast booth, given his audience. His King of Obscure References persona was welcomed by plenty for introducing some erudition to a game rooted in primitive instincts, but blue-collar fans were more into Smash Mouth than references to pre-Colombian art. If ABC ever decides to try a similar experiment again, I'm guessing they'll go with a comic like Bill Burr—knowledgeable about football, but with a working class sensibility.

Dennis Miller doing Monday Night Football was like a cook going out to the front of the house to wait on tables. He got all the dishes to the right people and kept all the water glasses full, but sometimes he was a little off-pitch with the tableside banter. ABC liked the comedian enough to sign him up for a third year, but then John Madden left Fox so the funny guy was out the door.

Don Ohlmeyer deserves credit for creative hiring. So does Miller for taking the job. Maybe he just tried too hard, like an actor you can see "acting." Still, it's hard not to miss someone who can up lighten up a dull game with witticisms like this one referencing the failed XFL football league's televised games: "People were calling NBC asking them to run the movie 'Heidi.'"