My in-laws liven up the house, and the Red Sox dead in clean water. 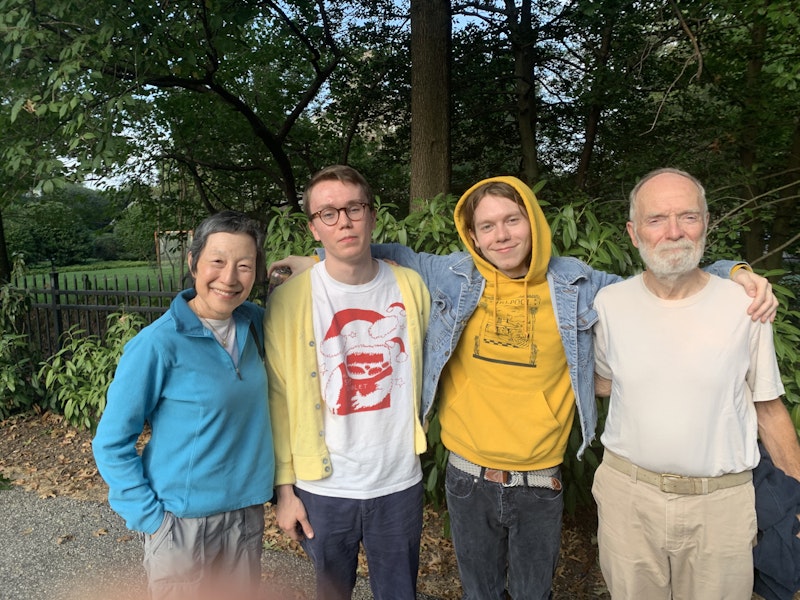 Aside from my son Booker, my favorite companion for watching baseball games is Los Angelino father-in-law Rudy, who, along with his wife Daisy, visited Baltimore for several days last week (pictured above with my sons), a pit stop on the way to a hiking expedition in the Catskills. We don’t see them often enough, but it’s always a jam-packed schedule of elaborate meals, political and cultural debate and jaunts around the city. Rudy laps me on the rings-around-the-trunk meter, but that didn’t stop him from this greeting last Thursday night: “Jeepers, Russ, your hair turned white!” Daisy laughed, as did I (after a double-take) and said, “Rudy can’t help but be direct.”

Anyways, we both were rather desultory that the regular MLB season was concluding that weekend. As I’ve noted, I’m a one-sport guy, couldn’t care less about the NFL, NBA or NHL, so with my team the Red Sox ending a frustrating and disappointing season—Rudy’s a lifelong White Sox fan, so sympathy, understandably, was scarce—the only matter of business left this year is root, root, root for any team to bludgeon the Yankees in the playoffs. If that happens, I can relax. I think the Astros are the best bet—the Yanks, in the ALDS, play the Twins, a team that I swear is on the Steinbrenners’ payroll—but even the obnoxious Dodgers would do.

He’s given up the practice now, but for as long as I’ve known him, dating back to 1990, I’d find Rudy with his morning coffee, scouring the sports pages and scribbling into a notebook rather arcane baseball statistics. Now that box scores aren’t timely—if printed at all—he’s denied that eccentricity. But, unlike me, Rudy’s a baseball generalist—perhaps because his team, save 2005, is usually out of contention by mid-summer—and as we watched the Orioles defeat the sleep-walking Red Sox on Friday night, he kept up a patter about Christian Yelich, Vin Scully, James Paxton, Juan Marichal, Yaz, Billy Beane, Kenny Williams, Luis Aparicio, and a bunch of players that aren’t in my orbit. As it happened, we both saw former Boston reliever Craig Kimbrel, now the definition of a white-knuckle closer, blow a game for his new team the Cubs—who promiscuously signed him for three years earlier this year—give up two homers on two consecutive pitches to blow a game for fading Chicago, and dash their playoff hopes. We were both tickled.

On Saturday afternoon, the six of us—Rudy, Daisy, my wife Melissa, Booker and Nicky and me—took in a matinee of Downton Abbey, a film that Daisy had seen already in Los Angeles, but was happy for a repeat. My sons both hated the film—as Nicky’s review notes—on somewhat different grounds. Booker’s not a fan of the British; with a long-after-the-fact denunciation of the onetime imperial power’s vile treatment of Ireland (from which our ancestors came) and the silliness of the royal visit to the Downton Abbey estate filled him with disgust. Nicky was more put off by the wanton display of wealth, class inequality and social hierarchies.

Daisy, who’s an Elizabeth Warren supporter—we mostly steered clear of that touchy subject at meals—was nonetheless entertained by the historical recreation and several fine acting performances, most notably Maggie Smith, who must be 110 at this point.

I enjoyed the film as well, fluffy as it was. I admit to no embarrassment that I watched the TV series of Downton Abbey on Masterpiece Theater—though tailed off at the last season, when they ran out of cogent plot lines—and preferred it to the shows that draw far more praise from critics. For example, I lasted about four episodes into Billions, even though a treatment of the financial industry held promise. Problem was (and is) the show’s just a cartoon—as was Mad Men about the advertising racket in the 1960s (one of my brothers worked on Madison Avenue in the late-1960s)—that’s in no way believable if you have even cursory knowledge of how Wall Street works.

Ditto for Succession, a very loose defenestration of Rupert Murdoch, because, like Billions, it’s just a scriptwriter’s wet dream, a way to “punish” the dreaded 1%. I doubt Murdoch is anything like his stand-in, Logan Roy, a man so evil (as a parent, husband and businessman) that it repels even a suspension of disbelief. The one standout actor in the show is Kieran Culkin, who plays the ostensibly dim-witted youngest son of Logan, and is hilarious at almost every turn.

Back to the Red Sox, who after following their franchise-historic 108-win 2018 season and World Series championship, won a mere 84 games, and are at a crossroads. Booker’s a diehard Sox partisan as well, but unlike me, doesn’t hang on every pitch during the season, taking a more analytical view. He laughs during the season when I’m ebullient or grumpy after a win or loss.

Rudy and Daisy had left for New York by the time of the season’s last game, Booker returned to Florida, so I watched alone as the Red Sox lucked into a win against the O’s. I tuned in for different reasons than past lost seasons: I wanted to see Mookie Betts (and perhaps Jackie Bradley Jr., Andrew Benintendi, Brock Holt and J.D. Martinez) one last time as a member of the team. Principal owner John Henry has dictated slashing the Sox payroll, for luxury tax reasons, and Betts, who’ll probably receive close to $30 million in his final year of arbitration before becoming a free agent in 2020, is the most logical fat to trim.

Reportedly, there’s wiggle room in Henry’s dictum of staying below the $208 million threshold, and you’d think he’d want to field a robust team—“bridge year” isn’t in Boston’s vocabulary—since if the Sox bomb, revenues from his TV station NESN, ticket sales and concessions will fall, but as I’ve often said the Red Sox inner sanctum is like the Kremlin, so we’ll see what surprises are in store.

Backtracking, Rudy, Daisy and the boys went out for a nosh early Saturday evening, a good opportunity to speak freely without the parents present. I doubt many state secrets were revealed, but we’ll never know. Which reminds me, as a last thought, of a tradition we had in Manhattan when the boys were much younger. I was reading The Wall Street Journal on Monday, and an above-the-fold headline (print version) read: “U.S. Shale Boom Slows Down Amid Worries Over Oil Supply.” That means nothing to most people, but in 2002 Nicky came up with the term “shale” (he claims it derived from “shamrock”) to describe small items I’d buy for them when we’d walk around on Saturday mornings in midtown and the Village. Trips to GameStop, Barnes & Noble, Japanese toy stores, comics emporiums, Kim’s Video and the like. “Is it a shale kind of day, Dad,” Nicky or Booker would ask, and, Evil Boomer that I am, it usually was.

In any case, whenever I see the word shale in a newspaper it cracks me up. And that counts for a lot: worth more than all the discarded Goosebumps books, video games and Hot Wheels combined.