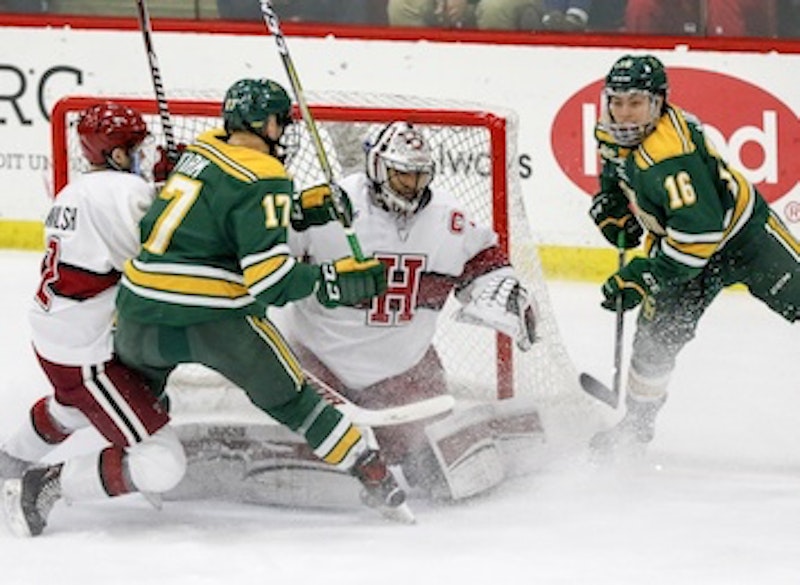 When most hockey fans hear Clarkson University, they think of the small research college way up in Potsdam, NY, that has defied the odds as a division I powerhouse and historically has one of the best winning percentages in all of college hockey. I’m among those allured by the name, so I dutifully show up to see Clarkson play Marist College in Poughkeepsie, NY. But this Clarkson is the “club” team competing in the American Collegiate Hockey Association, not the Eastern College Athletic Conference juggernaut that’s the other Clarkson University Golden Knights. The ones that have pushed at least eight players into the NHL in the past decade, the ones who, with a mere 4300 students on campus, made it to the NCAA Division 1 championships last year and fell to Notre Dame in the first round.

To be truthful, I knew I was going to an off-Broadway hockey show last Saturday night. It’s what I do, perhaps inspired this time by the New York Rangers having just started their 2019-20 NHL campaign with two straight wins.

I’m no stranger to McCann Ice Arena. It’s an awkward rink stashed in a corner of the rebranded Majed J. Nesheiwat Convention Center in Poughkeepsie, NY. It’s an ugly, rectangular concrete dump in the heart of a forgotten downtown. I’ve skated there many times for the open workout “Stick Time” sessions available to any and all hockey ham and eggers. Out in front of its lost front doors a trio of ignored flagpoles rise, with one in the center leaning at a dangerous southwesterly angle, perhaps on the verge of collapse. Appropriately, it’s the pole hosting the New York State flag, portending all that is wrong in Albany in one fell swoop.

The horrific “civic center” is a ramshackle place where minor league hockey franchises go to die. Marist College, rife with modern and somewhat swanky athletic facilities just a mile north on US Route 9, uses the McCann arena for its ACHA D2 club hockey team and has for many years. The rink is connected to a large concert hall with horrible acoustics and the inaccurately named “Poughkeepsie Grand” hotel. Part of its exterior fell three stories below onto an abandoned sidewalk a few years ago, maintaining Poughkeepsie’s reputation as North Yonkers with a lower population of talking dogs. Six years ago, I wrote in this space about Marist hockey sharing the convention center space with a gun show. Forgive me, then, if I repeat myself.

Having attended Marist club hockey on a regular basis for the past nine years or so, the lack of fights in ACHA hockey is made up for by the amount of wedding brawls occurring at the adjacent hotel between periods, several of which have involved game misconduct by the bridesmaids. Twice I’ve been in the lobby bar and felt the exterior windows shaking from wedding fisticuffs involving guests slamming each other onto the glass. If only the glass in the McCann Ice arena got such a workout? Some things never change in Poughkeepsie.

If they repositioned the rink at McCann and enabled full-circle seating, I’m sure they could pull off minor league hockey success given the failures and existing demand from nearby Danbury, CT, and Brewster, NY, both of which recently lost minor league hockey teams. The right marketing would kick ass and the Poughkeepsie bootstraps would be pulled up and celebrated. The right logo and merchandise designs would go viral with the burgeoning upstate hipster scene already thriving on a regional connoisseurship longing to be pulled away from the beardy clichés of craft beer and artisanal grist mills. But for now, the McCann brass have simply authorized a goofy new polar bear logo and hope their affiliation with a much more popular ice rink in Newburgh will get the job done.

McCann Ice Arena features scoreboards of the “Mountain Dew/Pepsi” variety that are relics from the mid-1980s and are somewhat embarrassing. The circa-1984 scoreboards are wretched. The Poughkeepsie Grand hotel has replaced the effete fellow tending bar with a stalwart Janis Ian lookalike who pulls of a decent sigh and half-eye roll with each order. There’s also the Poughkeepsie police officer assigned to monitor the “crowd” at the McCann Ice Arena. He’s a heavy-lidded fellow reminiscent of former Yankees reliever Jeff Nelson. He loves holding his post inside the arena as the rest of the Poughkeepsie force is called to break up the massive wedding fights out on Market St., a mere 10 yards from his cell phone that has all his attention between periods.

Nesheiwat is a local Jordanian fellow who renovates old gas stations and is determined to upgrade the Civic Center, though it has been slow going since the renaming. The real Clarkson connection, I find out later, is that famous character actor M. Emmet Walsh from Blood Simple is an alum of the Potsdam university. Forget Blood Simple, Walsh portrayed sportswriter Dickie Dunn in the classic 1977 hockey comedy Slap Shot with Paul Newman.

The game I attended was only the second contest for both squads, so there is plenty ACHA hockey action ahead for both. “Research” into the ACHA (media notes do not exist, ever) shows the organization to be part of the “deep state” of NCAA sports. It’s a massive web of three divisions and geographic regions covering club hockey teams for schools that already have DI, DII and DIII programs. The goal of both squads is to make it to the ACHA championships in March in Frisco, Texas, of all places. Don’t laugh. Florida Gulf Coast won the ACHA D2 championship last season and East Texas Baptist University is presently dominating the league.

Clarkson visited Marist for a “Pink the Rink” Breast Cancer Awareness event sponsored by a campus sorority. Turnout was fine for the late afternoon puck-drop (some Marist games start after nine p.m. following a disco-oriented public skating session). For these games, observation betrays the attempt at professionalism on the college level. Mismatched equipment and uniforms sell us all short. Look closely at the Clarkson squad and some guys have their name on the back of their jerseys, but many guys don’t. Some guys are wearing the green and gold official hockey socks of the team, but many aren’t. Some are wearing dark navy shorts while their teammates have Kelly green shorts. Welcome to off-Broadway club hockey.

I’m sitting in the Clarkson section of the arena that consists of two sets of parents with both dads sporting the Clarkson hockey hoodies. Hockey dads buy hoodies. God bless them.

A puck shoots up into our row and it was off the stick of #42, Clarkson captain Spencer Swain, a Jersey boy. His parents are right in front of me. Their restraint is admirable. The other Clarkson parents behind me say, “That was from your son, wasn’t it?” I planned to talk to a few of them but then our section was suddenly filled with residents from a local halfway house taking advantage of the free entertainment at the local ice arena. There was quickly a self-stim rocking girl (a la Leo Mazzone, the former Braves pitching coach) and some on-the-spectrum disrobing and yelping by an Art Donovan type of biracial dude. This guy retrieved a rolled-up magazine from a nearby trash can and quickly became an Asperger’s version of Herb Brooks, as he was barking at the crowd with his back to the game action, his cadence almost in time with the Marist boys who were starting to rack up penalties.

“This night is YOUR night” he seemed to be saying in his own language. He probably just wanted to go home. To his far right was an African-American fellow covered in bulbous tumors who was trying to cover his ears with his hands. I was with him. The PA annoyingly came off as a muddled underwater sound system. When they played a lot of classic rock in between face-offs, one couldn’t tell if it was the for-real Asia version of “Africa” or the irony-laden Weezer cover. This was a problem. In the past, the Poughkeepsie arena had no problem with the sound system, but on this Saturday night, someone had obviously hit the wrong knob, and all in attendance were suffering. The guy in charge of the halfway house folks was, as usual, decked out in way too much New York football Giants and New York Yankees gear. Mixing sports is bad.

Outside in between periods I noticed a crew of workers hurriedly tarring the roof of the civic center, specifically the swatch directly above the ice rink. They had a generator making lots of noise, perhaps hooked up to a Marshall stack left behind by Christian metal act Stryper, who can’t get enough of playing in Poughkeepsie. The generator was almost able to compete with a dozen or so Marist rowdies in the front row. They were riding the Golden Knights who played almost as sloppy as their uniforms. Even their goals lacked a scintilla of grace or elegance. Clarkson had a two-man advantage late in the first period that was downright embarrassing to watch.

The parents sitting near me seemed to check their phones during the excruciating sequences skated by their progeny who tried to be way too fine on the power plays. Marist was simply hungrier and would prevail 4-3, despite Clarkson attempts that rolled through the Marist goal crease at least four times in the closing minute. It was a well-earned victory for the Red Foxes and they, along with their fans who had witnessed a lackluster home opener loss to William Patterson the weekend prior, could utter a phrase very few in the game get to say: “We beat Clarkson.”