The Washington Nationals are finally enjoying the October stage. 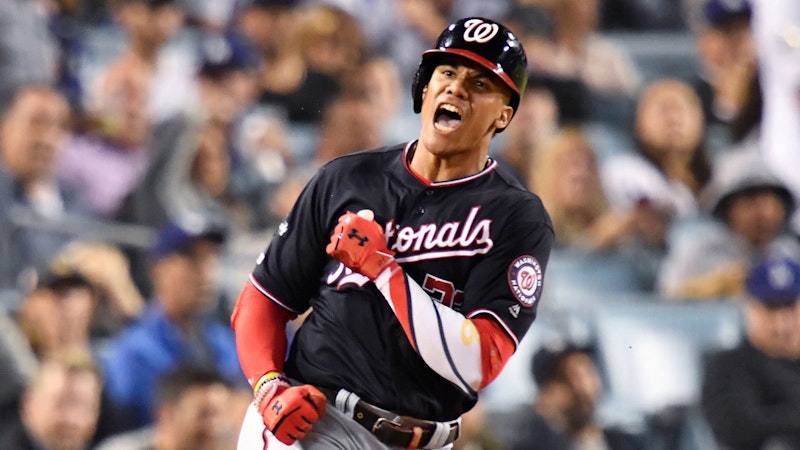 Every year, October reminds baseball fans how quickly a team's fortunes can flip.

After losing Bryce Harper to the rival Philadelphia Phillies in the winter, the Washington Nationals came into 2019 with restrained optimism. Still boasting plenty of talent, the Nats lineup was not quite dominant. Most players were either too young or too old. The speedy Trea Turner showed weak plate discipline in recent years. Juan Soto, who many viewed as their next dominant hitter, had a strong rookie season, but was still a teenager until the end of his initial big league campaign. Anthony Rendon, still in his prime and established as a big league hitter, had never hit more than 25 homers and battled injuries earlier in his career. Ryan Zimmerman, the Nats longest-tenured member, had limped through most of the last five years.

The Nationals crawled out of the gate this year. By May 23rd, their 19-31 record put manager Dave Martinez' job in jeopardy. To lose Harper and then nosedive toward the bottom of the NL East was the nightmare fans envisioned.

But the Nats gradually bounced back, ending the first half at 47-42, with a possibility in the wide-open NL wild-card race. Atlanta had taken control of the NL East with their scorching June. By August, their hold on the division seemed a foregone conclusion. At the July 31st trading deadline, the Nats added some bullpen help, though many questioned whether journeyman Daniel Hudson would be enough to secure late-inning leads before Sean Doolittle (battling arm issues for the last few years) closed games. Still, the Nats scored enough runs to set themselves up and the starters, despite Max Scherzer missing time, did more than enough. Throw in the Chicago Cubs’ collapse and Washington secured the top wild-card spot behind the equally scorching St. Louis Cardinals.

In the wild-card game, they faced a Milwaukee Brewers team that recently lost last year's MVP Christian Yelich to a fractured kneecap and a pitching rotation that had been mediocre throughout the year. The Brewers, who had their own October surprise last year, were leading the wild-card game 3-1 in the 8th inning. TBS' typical postseason production showed Nationals fans with familiarly agonized faces, as their team was six outs from another bitter October exit. These fans had seen the Nats drop elimination games in DC in 2012, 2016 and 2017. Home field held no advantage.

Then the Nationals luck turned. Brewers lefty Josh Hader toed the rubber. He started the 8th with a typical K, but lost command and hit center-fielder Michael Taylor with an inside pitch. After Trea Turner whiffed, there were two out. Ryan Zimmerman ambled over to the plate and finally eeked a broken bat flare to shallow center, just over the glove of the second baseman. Zimmerman smirked at the dugout, shrugging his shoulders as if to say, "I'll take it." Anthony Rendon worked a six-pitch walk. And up came the phenom... Juan Soto.

He lined a sinking fastball to right. It dropped in front of rookie Trent Grisham and then the topspin on the drive enabled the ball to swerve past Grisham, clearing the bases. A 3-1 deficit became a 4-3 Nationals lead as the stadium went berserk. Three outs later, the Nationals advanced to the Divison Series to face the loaded Dodgers.

After surviving the Dodgers lineup thanks to starters Scherzer. Stephen Strasburg and Patrick Corbin, the Nationals made another miraculous comeback this past Wednesday. With the NLDS series even at 2-2, Strasburg's first-inning jitters put the Nats in an early hole, 3-0.

Still trailing 3-1 in the 8th, it was a familiar scenario for the Nats. But now they had the mojo. The Dodgers’ bullpen was a question mark all season. Clayton Kershaw came on to pitch. Rendon smacked a low slider to clear the left-field wall and trim the deficit to 3-2. Then Soto dug in and launched a drive deep into right-center. A no-doubter, Kershaw crouched in agony as soon as the ball was struck. The Nats went on to win in the 10th on a grand slam by Howie Kendrick, who atoned for multiple fielding accidents throughout the five game set.