The Orioles Have Come a Long Way Since 30-3

The low point of a long drought. 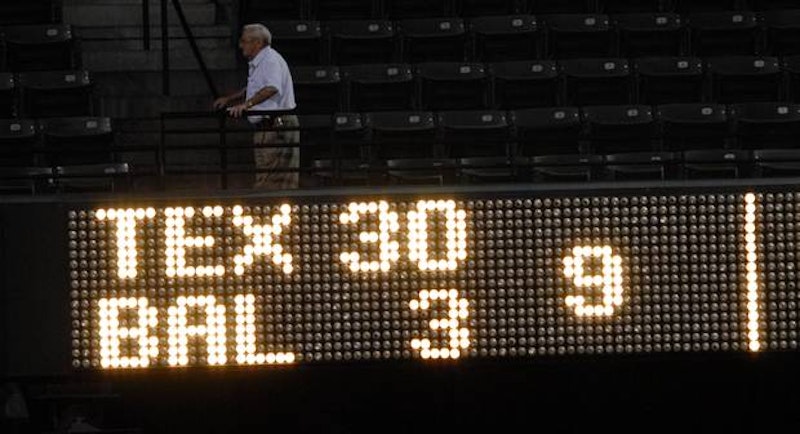 August 22nd marked the sixth anniversary of the Baltimore Orioles’ demoralizing 30-3 loss to the Texas Rangers. The O’s and Rangers played a meaningless game that afternoon featuring two clubs well out of the playoff chase and a combined 23 games under .500. By the time I got home from work the Rangers were whoopin’ the Birds. Starting pitcher Daniel Cabrera was predictably confounding that day, like the entirety of his Orioles career, as he allowed six runs in five innings to raise his season ERA to 5.10 and drop his season record to 9-18. Cabrera gave way to the bullpen trio of Brian Burres, Rob Bell (who I honestly don’t remember), and Paul Shuey who combined to give up 24 runs in four innings. The most unnerving aspect of that game wasn’t so much the humiliating loss (Orioles fans had grown pretty accustomed to those by 2007) but the fact that the punishment was being dished out by a terrible Rangers team. Getting drubbed by the Yankees or Red Sox was one thing, but the Rangers?

When I saw some Twitter posts yesterday mentioning the anniversary of the 30-3 game I quickly dismissed them, not wanting to be reminded of such hopeless times. As I thought more about it, and listened to people around town shoveling dirt on the 2013 Orioles, the “Worst Loss Ever” took on a bit more significance. Sure, the 2013 Orioles have some problems, but they pale in comparison to those of just a few seasons ago.

The O’s lineup on August 22, 2007 featured such baseball luminaries as J.R. House, Tike Redman and Freddie Bynum. The pitching staff was equally pedestrian. Following the 30-3 drubbing the Orioles went on to lose 27 of their last 38 games.

In hindsight, the loss to Texas that day laid the groundwork for the Orioles resurgence we’ve witnessed over the past two summers. Andy MacPhail was just two months into his job as Baltimore’s President of Baseball Operations when the Rangers clobbered the O’s. The half measures of the previous decade had delivered the once proud Orioles to rock bottom on that August day. Following the 2007 season MacPhail halted the Orioles trend of signing retread veterans and ripped off the bandage; Erik Bedard went to Seattle, Miguel Tejada was dealt to Houston, and the team was officially in the business of rebuilding.

The Orioles begin a three-game series against the Oakland A’s tonight at Camden Yards. The game has playoff implications. Baltimore sits just three games back of Oakland for the AL’s second Wild Card spot. A clean sweep of the A’s could push the O’s to the top of the Wild Card standings and silence the nervous Nellies who have filled the Baltimore airwaves and corner bars for the past two weeks.

The 2013 Orioles aren’t perfect. The starting pitchers are solid but unspectacular and don’t pitch into the seventh inning nearly often enough. The offense has slumped in the second half thanks in large part to the season-long struggles of Matt Wieters and the disappearance of Nick Markakis’ power stroke. The bullpen that pushed Baltimore to the playoffs last season hasn’t been nearly as reliable as a season ago. Buck Showalter has made some head-scratching lineups (Markakis’ continued presence in the three hole drives me nuts) and pitching decisions (T.J. McFarland starting the ninth inning of a tie game against the Rays) over the past few weeks that have left me wondering if he’s been napping in the dugout. The team has yet to identify a designated hitter but carries three weak-hitting second baseman on the 25 man roster.

Baltimore will send 14-game winner Chris Tillman to the mound tonight against Oakland. Tillman is no ace but he has emerged as one of Baltimore’s best starters and he’s a far cry from Daniel Cabrera. The 25-year-old righty was acquired from Seattle when MacPhail shipped Bedard West and kick-started the rebuilding. Where his predecessors relied on the likes of Rob Bell and Paul Shuey in the late innings Showalter will choose between Tommy Hunter and Darren O’Day. While Tike Redman contemplates his life after baseball the Orioles will rely on Adam Jones in center field. The 30-3 loss to Texas was the end of Baltimore’s long road to the bottom and the beginning of the climb out of the abyss and back to relevancy.

Today the Orioles are a flawed but relevant team about to play a meaningful series. What more could we ask for, besides maybe a right-handed power bat and eight innings out of starter?