The Travesty Known as American Soccer

Sport of the future; next stop Willoughby. 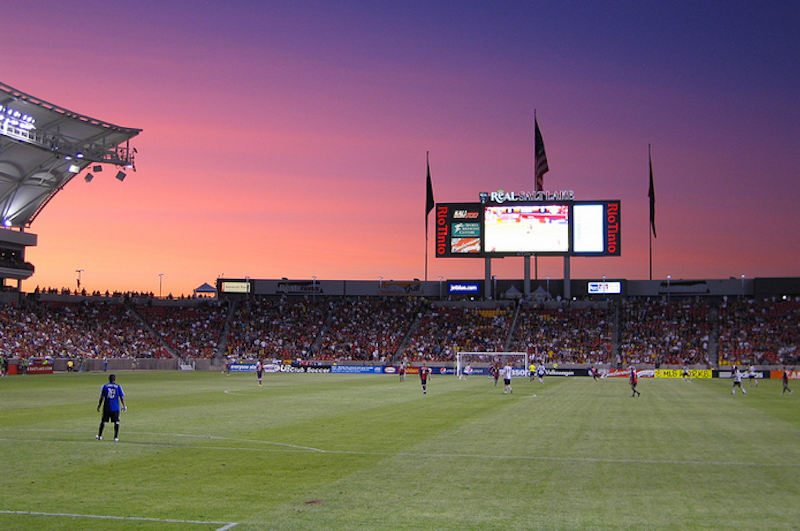 Americans getting “sold” on soccer has now become an annual television rite—a cross-cultural mash-up that won’t go away and always seems to annoy, like the Ryder Cup. The latest installment is courtesy of NBC Sports and its cable start-up hellbent on renting more office space in Stamford, Conn., to crank out $250 million worth of coverage of the English Premier League.

Fox Soccer Channel was doing just fine, thank you, bringing live soccer into our living rooms the past few years at a pace that made Englishmen quite jealous. But no, NBC (and Comcast) have to “think big” and outbid Fox, which has also launched its own ESPN competitor with the Anglophile moniker, Fox Sports 1. On the godsend that is DirecTV, the two hard-to-find sports boutiques run side-by-side around channel 220 or so. The hard sell this time came courtesy of an NBC Sports promotional campaign featuring Saturday Night Live alum Jason Sudekis portraying a hayseed American football coach named Ted Lasso hired to run the north London club Tottenham Hotspur. It’s funny for about 14 seconds, which leaves another five minutes of painfully obvious jokes dying on the picnic table under a halo of flies. It’s nothing short of insulting for a storied league with centuries-old clubs dotting the island landscape to suffer the tired Madison Ave. clichés of this campaign. (The “flash card” scene is particularly horrific.) The Ugly American stereotype is served up with irony this time, given the fact that U.S. sports owners—many of whom are not a far stretch from Sudekis’ Lasso character—have already infiltrated EPL club ownerships. The American book-cookers are about as welcome there as Oliver Cromwell in the corner snug of a Dublin pub.

Since the days of Pele romping through the AstroTurf of the Meadowlands during the disco era, American sports fans have been told soccer is coming, one if by land, two if by yet another sports cable launch. Meanwhile, as seen on the same NBC Sports airwaves, we have our own watered-down pro soccer circuit curiously named Major League Soccer which has served as one last paycheck to plenty of aging European stars, including a guy named David Beckham. MLS teams were forced to toil inside U.S. NFL facilities for its first awful decade, its summer schedule mocked by the rest of the soccer world too wise to suffer sunstroke in a suburban Dallas stadium watching a team called the “Burn.” I was there for the birth of MLS soccer on April of 1996 at Giants Stadium. The New York/New Jersey MetroStars, as they were clumsily dubbed, lost to the New England Revolution in the final seconds after a less-than-spectacular own-goal which was followed by a lame fireworks display from the rafters. So much was wrong. The installed “natural grass” falling apart, the clock counting down like an NFL ticker—instead of the standard soccer timepiece moving forward to 90 minutes, and the corner kicks required player contortions due to the proximity of the grandstand walls.

Eventually, MLS convinced a few cities to build soccer-only facilities. There was some over-expansion and comical name changing (the Kansas City Wiz became “Sporting Kansas City”) but soon enough the personnel wearing the funny laundry started getting work overseas. Landon Donovan, Brian McBride, Carlos Bocanegra, Jozy Altidore and an Airstream trailer full of goalkeepers departed MLS to have their soccer passports stamped by European giants. None was more prolific abroad than Clint Dempsey, a bootstrap story out of Nacogdoches, Texas. Dempsey went from a skinny kid living with a sponsor family during his rookie season in 2004 with the MLS New England Revolution to the toast of Southwest London as a sparkplug goalscorer for Fulham.

In December of 2011, with McBride having paved the way at Fulham (they named a pub after him inside their grounds), Dempsey broke McBride’s record for most EPL goals by an American. This summer, after those glory years at Fulham and one stormy season at Tottenham, Dempsey stunned the “footie” crowd by returning to MLS and signing an enormous contract with the Seattle Sounders. Though he is the heart and soul of the U.S. National team and bound to lead us in next summer’s World Cup in Brazil, when he punches the clock for the Sounders he is stepping onto a fake turf field. Even with 70,000 screaming baristas in the stands, it remains a fake turf field. And when that stuff is underfoot, the one they call Deuce will always be reminded that he is a long way from England. Even the lowest third division squad in Limeyland has real grass.

There is an underlying sadness in seeing Dempsey back in MLS, especially for the fans who were there when the league began. We succumb to a selfish urge to ignore how far the league has come and instead focus on that late 90s suffering which was so widespread at Giants Stadium when most of the league played on fake turf. No solace can be found in leafing through the MetroStars official program from their 1996 debut. It was a 56-page tabloid publication called Freekick that attempted to go the bilingual soccer fan route by printing Spanish versions of many of the articles alongside the English copy. Tony Meola was on the cover of the first edition, and the MetroStars home schedule appeared on roughly 34 of the 56 pages, as do several MLS ads taking potshots at baseball. There were didactic sidebars headlined “What Happens if There is a Tie?” and slightly embarrassing uses of clip art some outlandish layout sorties through the depths of the Quark Express jungle.

The MetroStars PR man back then was the stalwart sportswriter Jeff Bradley. Here was the lede of his “View from the Press Box” column (April of 1996 remember): “This time it will be different. I promise. This time it will be different because Major League Soccer is for us. A soccer league for soccer fans. No longer do we have to waste energy trying to convert the non-believers.” Apparently, NBC Sports believes there are plenty of non-believers out there.