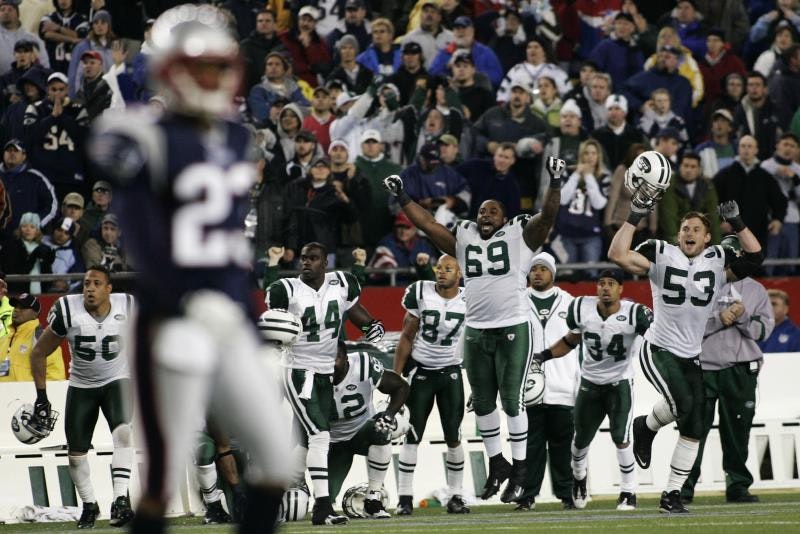 They did it! Rex Ryan! The 2010 Jersey B squad follows in the footsteps (don't suspend me Coach...) of 2007 Jersey A, and beat down the smug and arrogant New England Patriots.

Unfortunately, this Patriots team did not maintain its precision-infused efficiency. It's tough to get over the losses but as losses and teams stack up, this will linger more along the lines of what used to be the second worst loss in Patriots history.

This team reminded me of a mix between the 2006 and ’07 squads. In 2005, the Patriots were new on the coordinating staff, having just lost Weis and Crennel. It was built around Belichick with no true coordinators in 2006.

The roster around Brady was a rag-tag, group of undrafted WRs after Belichick made a rousing move to trade their disgruntled WR1 for more than he was valued for—Deion Branch for Seattle's 1st round pick. The defense wasn't sexy, having lost Willie McGinnest and having Bruschi incapacitated after the stroke. In truth, they actually weren't that good. Just like the 2010 guys.

But, then there was Brady. The dude toughed it out and willed them to 12 wins and a trip to Indy for the AFC Championship game. A heartbreaker, if you remember it. I would say this one beats it out in terms of a painful loss but in the Indy game, Manning beat Brady and Belichick for the first time. Much like Sanchez and Ryan just did.

And what happened next? Wes Welker. Randy Moss. Donte Stallworth. The Patriots reloaded and threw out a beatdown the likes of which had never been seen before. Brady throwing 50 TDs was a point to screw Peyton Manning and put him in his place—second.

True, beating Brady is not a secret, but it's really fucking hard to pull off. The Jets put on pressure with three- and four-man rushes. While it sounds like a great plan, it is not easy to do. The Jets couldn't do that during the season. Pretty much nobody could. Allowing the Jets LBs and Safeties to clog the middle zones killed everything underneath on the short crossing routes to Welker and Branch and nothing could get over the top to the TEs. Sure you could say the three sacks in the first quarter rattled Brady. Fine, but you didn't see him just throw the ball away out of bounds or put the ball somewhere his receivers couldn't catch it. No. Once he got time he tried to use it, but no one could get open. Those last two sacks in the third and fourth quarters were coverage sacks, not pressure sacks.

The pressure affected the pick. At least a three point, if not a seven-point swing. The Patriots could have put the Jets on their heels right there and didn't. Crumpler drops the TD on the next drive. The next swing, with one minute left, is another seven-pointer. After the fake punt, they put the Jets on a short field play fucking terrible defense, falling behind to 14-3.

You want to call that outcoaching? I won't give that Rex Ryan more than one once of credit for that. That’s mistakes on the field by the players. They were in positions to make plays all game. The plays were not made. If there were an outcoaching, then Ryan would have put Brady away. He did nothing of the sort.

The Patriots made a few adjustments. Brought it to 14-11. Then the underneath pass to Cotchery for about 60 yards. And the momentum was lost.

So do we as fans of this team have the right to be upset in the day after this? Sure. Will I dwell over it? No. The Patriots’ model for success is sustainable. It's inspiring. Business-like, blue collar. A sixth round QB who worked his balls off all this life vs. the first round USC with pedigree. Undrafted players who believe in the team scattered all over the place vs. the loudmouth group of exiled first rounders (Cromarte, Edwards, Holmes, Tomlinson, etc.) who believe more in themselves than a team. It's heartbreaking to see the bad guys beat the good guys. Guess who cheated this year? The Jets did, tripping players on the field. The disappointment in the gut of every Pats fan this morning is the one that you would have felt if Iceland beat the Ducks in D2.

So don't go burning your Brady jersey just yet. There will be football next season, and we can do this all over again.

Hey, did you hear the Sox got Adrian Gonzalez and Carl Crawford?