Can Matty Ice Take the Heat?

It all comes down to Saturday's game against Green Bay. 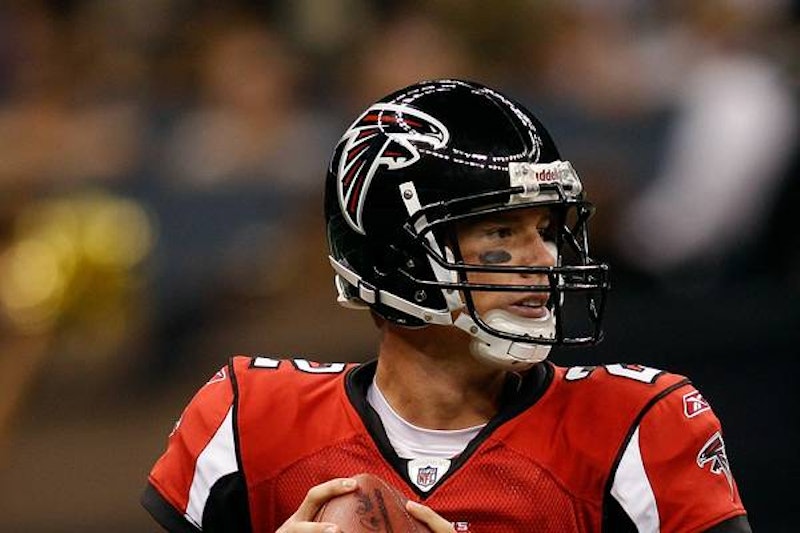 The Atlanta Falcons face the Green Bay Packers in Saturday night's NFC Divisional playoff game. Besides featuring two excellent teams the game also showcases two of the NFL's best young quarterbacks, Aaron Rodgers and Matt Ryan. The Packers’ Rodgers earned his first career playoff win in last week's three-TD performance against the Eagles. Ryan, nicknamed Matty Ice for his cool demeanor, is still looking for his first career playoff victory. The Falcons franchise has made a remarkable climb from the ashes left in the wake of the Michael Vick catastrophe. Coach Mike Smith and Ryan, then a rookie, led the team to the playoffs in 2008 only to lose to the eventual NFC champion Cardinals (that still doesn't sound right) in the Wild-Card round. After missing the playoffs last season with a 9-7 record the team has rebounded to amass an impressive 14-2 record and the top seed in the NFC.

Ryan will take the field on Saturday in a vastly different position than he did two years ago against Arizona. He's no longer the wide-eyed rookie who's swimming in the deep end. Now he's considered one of the league's top quarterbacks and is the leader of the NFC's team to beat.

In a league where quarterbacks are judged primarily on wins and losses, especially playoff wins and losses, Ryan’s been anointed as the “Next Big thing” by pundits despite his lack of playoff experience. I'm not doubting Ryan's ability. The stats speak for themselves. In just his third season Matty Ice has a career 66-34 TD/Int ratio and an absurd home record of 20-2. However, a home loss against Green Bay and another one and done playoff ouster will lead to unfair questions about Ryan's ability to win a big game.

Baltimore's Joe Flacco, a third-year QB just like Ryan, has a put together an excellent 4-2 playoff record. In contrast to Ryan, commentators often downplay Flacco's playoff success, attributing his record to playing for a Ravens team more known for defense than offensive exploits. While Ryan is probably over-hyped at this point of his career, Flacco doesn't get enough credit. He's performed well in big situations and progressed every year of his career. Not only were Flacco and Ryan both drafted in round one of the 2008 Draft, they each grew up in Greater Philadelphia, made the playoffs as rookies and their stat sheets and won/loss records are near mirror images. I don't know which of these young QBs will lead his team to victory this weekend; but both quickly entered the list of top 10 NFL QBs, brought hope to their respective fan base, and will provide years of playoff excitement for football fans across the land.