Welcome to the Broken NBA 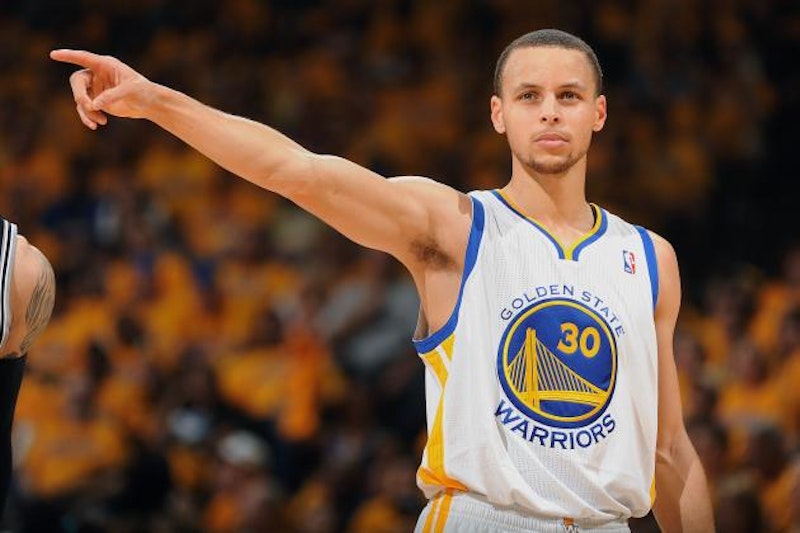 Which is more impressive: Steph Curry improving on last year’s MVP season or the entire team going 23–0 without their head coach, Steve Kerr, who’s recovering from complications after back surgery? (At some point, we have to consider the fact that coaching these Warriors may not matter at all until the playoffs start. These players coach themselves, which is how we can explain the collective fire they currently play with… that’s right, they play with fire. See also: Green, Draymond.)

Which is more impressive: the fact that Steph Curry has realized any shot he takes is a good shot (despite his own unselfish tendencies) or the fact that LeBron James isn’t the unanimous choice for best basketball player in the galaxy anymore?

Which is more impressive: Golden State’s 79 first-half points against the Pacers on Tuesday night or Klay Thompson’s 10–13 shooting from deep at the half?

Which is more impressive: winning 67 games and the NBA title or starting the next season with a collective fire that will not be extinguished even after the previous year’s glory?

The three-point line was added to the NBA rulebook, and painted on NBA courts in 1979. (The ABL painted that line in 1961 and the ABA embraced a three-point arc in 1967). The NBA line has existed for 36 years. For a long time, it threatened to shake up the foundation of the game. A sport dominated by unnaturally tall man was gradually adapted to take advantage of supreme agility and breathtaking athleticism, but the marksmanship that comes with a long-distance shot was not incentivized with an added point until 1979. The three-pointer stretched the game out. Instead of playing in two dimensions, laterally and horizontally, the depth of the shot added a third dimension.

Still, it was taken in limited doses. A miss from deep might prompt a coach to remove a player from the game. A three-pointer had an air of desperation about it. Teams used the shot as a way to come back from early catastrophe, not to build a lead in the first place.

There was no “green light” on the three-pointer until Larry Bird began shooting close to three attempts per game in 1986. Reggie Miller entered the NBA in 1987. Defenses gradually adjusted to shooting guards and small forwards moving further out on the wings. A point guard’s role was still very narrowly defined in the late-80s. By 1990, Mark Price cracked things open and averaged five three-point attempts. As the pace of the game slowed down in the 90s and hand-checking forced the direction of play into half-court, bruising post-ups, and isolation-heavy sets, the game got uglier and the three-pointer became a last resort. Defense became trench warfare. Still, there were the Houston Rockets, who led the league in attempts from deep and shot their way to the NBA title in 1994, thanks in large part to Hakeem Olajuwon’s dominance. Even before Houston became Morey’s experiment in analytics, the Rockets were taking the most threes. Even then, they shot only league average (33.4 percent) from deep. In the regular season, those Rockets took 15.6 threes per game. Winning the title with Kenny Smith, Robert Horry, Vern Maxwell and Mario Elie whipping the ball around the arc and taking 25-footers changed the NBA. Of course, none of it would’ve been possible without the double-teams on Olajuwon, and his elite court vision.

The following year (1994–95), threes were in abundance. Only five teams shot 1000 attempts in ‘93–94. The number ballooned to 23 teams, with the Rockets again leading the NBA at 21.4 per game. Today, it’s routine to see teams taking upwards of 35 three-pointers in a game. The Warriors and Rockets are both averaging over 31. They are both on pace to shoot over 2500 threes this season.

Steph Curry was born in March, 1988 at the same Akron, Ohio hospital where LeBron was born just over three years earlier. Steph was born in Ohio because his dad, Dell, was on the Cleveland Cavs. Steph was born about a month after Larry Bird won his third straight three-point shootout contest at the NBA’s All-Star Break. The three-pointer was not yet nine years old. Dell Curry moved on to the expansion Charlotte Hornets and became one of the league’s first “three-point specialists.” In his prime years (‘93-’96), Dell took nearly 40 percent of his shots from beyond the arc. Steph watched his dad and he worshipped Reggie Miller.

When Steph was in high school, Steve Nash was at his apex. In 2004–05 and 2005–06, Nash won back-to-back MVPs. The Suns famed seven-seconds-or-less offense propelled the league and reinvented free-flowing offense. Klay Thompson was a sophomore in high school when Steph chose to stay near his hometown in Charlotte, and attend Davidson, a tiny liberal arts college with a great academic reputation and a men’s basketball team few outside of North Carolina were aware of.

Steph went to Davidson and dominated, but not so much that he was a consensus top-five pick. Only 6'3" and not supremely athletic in the obvious ways (sprinting, jumping) but with incredible hand-eye coordination, Steph was available for the Warriors when they picked at number seven. Johnny Flynn, the much better sprinter with serious hops, was picked sixth. Flynn, who had a nice college career at Syracuse, went to Minnesota. Then Houston, then Portland, then Melbourne. Now he’s playing in Italy, with a team called Orlandina. Before you feel bad for the Wolves, remember that they have Wiggins and Towns and reasons for optimism. Still… it has to be painful for Wolves fans to watch Curry simply set fire to the NBA, night after night, over the last three years.

Klay ended up at Washington State, hardly a hotbed of NCAA hoops. Klay shot well enough to look like an NBA-ready reserve shooter, but wasn’t nearly as enticing as the Czech teenager Jan Vesely (sixth pick to Washington) or the college star Jimmer Fredette (10th pick to Milwaukee). The Warriors landed Klay at the 11th spot. Don’t forget Kawhi Leonard lasted until 15th.

Draymond Green was a wonderfully versatile college power forward at Michigan State, but nobody expected much out of a career 36 percent college-three-point shooter. The scouts saw 6'7" but they didn’t consider the future advantages of Green’s 7'1" wingspan, when combined with an unlimited desire to out-work everyone else on the court.

Their record is 23–0. Looking through the results, only seven of the games could be considered relatively close. An early season win over the Clippers in Game Five. A nine-point win in Sacramento in Game 7. An overtime win at home against Brooklyn on the third game in four nights in Game 11. A five-point win over the Raptors in Game 12. A memorable comeback win (23-down) and a 70-point second half in Los Angeles over the Clippers in Game 13. Not another non-blowout until a trip to Salt Lake City and the Stifle Tower/Gobert Mountain in Game 19. Later on in the road trip, a three-point win in Toronto in Game 21. Steph’s 44 points (on only 24 shots) ruining a career night from Kyle Lowry (41). Steph was 12 years old, shooting on that court before Raptors games when Dell was playing out the last few years of his career. Every night, children across the world are dreaming on themselves playing as adults on an NBA court. Steph was 12 years old. He would leave middle school and spend many late afternoons shooting on an actual NBA court. Visualization has become trendy in sports psychology. Twelve-year-olds dream. But the dream and the reality were never entirely separate for Steph.

Many in the NBA media talk about how Steph is revolutionizing the game. In its history, who’s ever been given carte blanche to pull-up off the dribble from 28 feet? Today, you might argue that LeBron, James Harden and Kevin Durant are given that same freedom with the ball. All three have contributed their parts to the revolutionizing of NBA basketball, and the dynamic elements of individual creativity with the ball that surround today’s game. LeBron’s strength and agility are revolutionary. Daryl Morey’s analytically-minded philosophy, combined with Harden’s incredible knack for penetration, passing angles, and his ability to outwit opponents into fouling him (or appearing to) is all revolutionary, and Kevin Durant’s length and shooting ability, make him a truly rare player. Almost as rare a player as Steph Curry. These are the top offensive basketball players on earth today.

Back to Curry. Combine Steve Nash-type dribbling skills, increasingly creative passing acumen, unparalleled range, and a will to win that often gets overshadowed by his boyish features. This is Steph Curry pulling up on a dime from 29 feet. This is the net barely moving. Give him a facilitating point forward named Draymond Green, and a splash brother named Klay. This is not a blueprint for building a team’s title hopes. It’s an anomaly. Steph hasn’t revolutionized the game. He’s broken the game.

Now we’re at 23 wins. Now we’re at 32.5 points per game, 53 percent from the field, and 47 percent from distance. The distance is relative, though, isn’t it? Twenty-five feet used to mean long-distance in the NBA. Not anymore.