The Black Mamba Stayed Too Long

Jim Brown showed players how to retire the right way, but they rarely do. 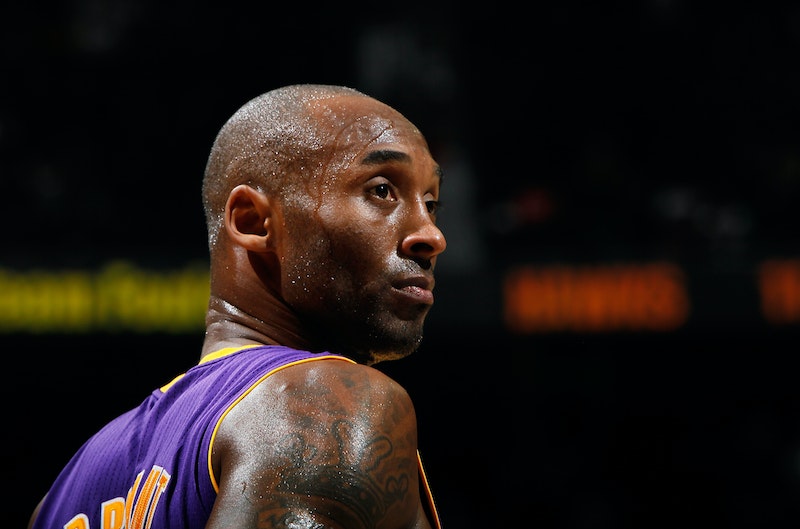 Kobe Bryant can no longer play basketball at the "starting five" level. In fact, he'd be warming the Lakers bench if he wasn't the legendary Bryant who has five NBA titles to his name and over 32,000 points scored, making him the third most prolific scorer in league history. But points don't come easy for the aging superstar anymore. His shooting percentage is just above 30 percent, an embarrassment for a player who once scored 81 points in a single game. Just how bad is Bryant now? He has the lowest shooting percentage in the NBA for players who've taken over 150 shots. The Black Mamba, as he’s dubbed himself, ain't what he used to be.

It never made any sense for him to continue this year. The Lakers are rebuilding now, so they have no shot at a title. That title number six that Bryant wants so badly—the one that would tie him with Michael Jordan, after whom he’s modeled his entire career. You'd think that the fractured knee last season and the ruptured Achilles the season before might’ve given him hints that it's time to let his jersey hang from the rafters at Staples Center now, but very few athletes know how to exit the spotlight gracefully.

Worst of all was Muhammad Ali's depressing, desperation-fueled decline. In his penultimate fight, he took on Larry Holmes in one of the saddest spectacles in sports history. Holmes obviously held back, not wanting to hurt Ali, but his punches on that October 1980 night in Las Vegas probably contributed to the champion's Parkinson's syndrome.

One great showed everyone how to draw the curtain on a spectacular sports career the right way. That was the incomparable running back, Jim Brown of the Cleveland Browns, who won rushing titles in eight of his nine NFL seasons—while never missing a game—before hanging up his spikes at age 30. Brown, the greatest runner in football history, was at the top of his game then, and his retirement stunned the sporting world. He was acting in Hollywood films by then, and getting into the activism that he would pursue for years. He said he needed more mental stimulation than football could provide him, which is not something you normally hear from athletes.

Bryant recently announced this was his last year. Why he did it at this early point in the season is anyone's guess. My first thought was that the Lakers wanted it. That way they can explain away not benching the worst shooter in the NBA. It's his final season and they can say he's earned his place on the floor. A 20-year NBA career with just one team gets you that. Bryant's last chance at championship number six disappeared when center Dwight Howard departed the Lakers for the Houston Rockets. Howard didn't enjoy playing with Bryant, and few do. He’s not the Magic Johnson type of Laker. Magic once walked into a room I was in and he lit it up instantly. If Bryant were able to get along with Shaquille O'Neal, and Shaq had stayed in L.A. for more than three years, who knows how many more NBA titles they could have won together.

Kobe Bryant is no Michael Jordan. He's still on the short list of basketball's greatest all-time players. But he's now stuck in a long final season. Bryant once told Newsweek that he doesn't believe in happiness, so at least it won't be too much of a shock to his system as he tries to conjure up his glory days in various NBA cities one last time but finds, at 37, that time has finally caught up with him.