On the Connecticut border, an outdoor hockey solstice. 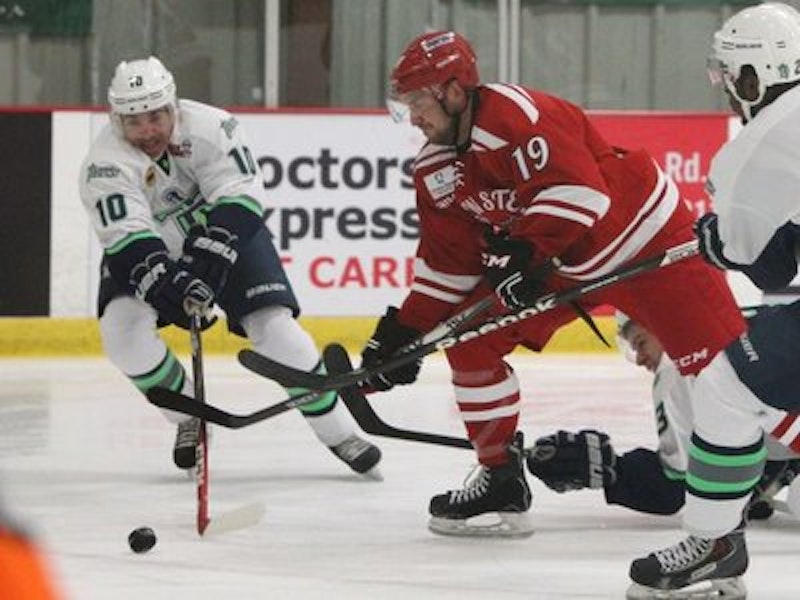 The NHL’s Winter Classic outdoor game on New Year’s Day has become a brilliant example of nostalgia-fueled tradition that’s only a few years old. This year’s match-up has the Montreal Canadiens visiting Gillette Stadium in Foxboro, Mass., to face the Boston Bruins who, unlike their regional NFL counterparts, are not habitual cheaters.

As a few hundred people might know, the six-team Federal Hockey League, a low-level circuit that feeds the lower levels of NHL-affiliated minor leagues, held a garage sale version of the Winter Classic last weekend. They called it Outdoor Border Wars because the game pitted the Brewster Bulldogs of Brewster, NY against the Danbury Titans of Danbury, Conn., just over the state line from Brewster.

After reading Seamus Heaney’s poem “A Dream of Solstice” I decided to attend this outdoor hockey game with its puck-drop scheduled during a Sunday sunset. Luckily the Saturday night winds had subsided, and as I plowed my VW Golf into the Putnam County NYC commuter belt, I found myself winding through a dark ridge on a side road off I-684 somewhere south east of the village of Brewster. Pulling into the parking lot of the Brewster Ice Arena, home of the Brewster Bulldogs, the temperature was beginning to plummet and Heaney’s line was clear as ever. “It is the same with snow the sun releases; The same as when in wind, the hurried leaves swirl round your ankles and the shaking hedges that had flopped their catkin cuff-lace and green sleeves are sleet-whipped bare.”

Yes, Heaney’s poetry got me there, but when I looked into the faces of these young hockey players skating on an outdoor rink with multiple MacGyver-style riggings, I realized low-level minor league hockey is more of a Cormac McCarthy world. They ride infatuate and half fond on shabby buses at the demise of their days, pursuing towns like Dayton, Port Huron and Berlin, New Hampshire. Angry countenance is common, especially during the pre-game warm-up when they can barely hide their horseback travel pains. They’ve got surnames like Maktaak and Zanella and Giroux. For the outdoor game, some fans brought dogs. I greeted one named Bethany and then looked up to notice one of the linesmen was named “Peace.” A man can seek irony when watching a game in a hockey league that seems to expand and contract at a moment’s notice when some car dealer/owner has a bad month with the Nissans. That means the Zanellas and Girouxs and Maktaaks sometimes have their names sewn on the backs of their jerseys and sometimes not.

For instance, the Bulldogs had just signed a new goalkeeper and he was introduced as a starter with a blank jersey, while Brewster’s old goalkeeper from a few weeks ago had been waived and then signed by Danbury and was starting in the outdoor game for the Titans. His name is Mike Pearless and he had been with the Danbury Whalers last season, but they disbanded and then returned to Connecticut this winter as the Titans by the graces of the same car dealer who owns the Bulldogs. Muddled alliances and ownership upheavals are a fact of life for competitors on this level of the sports food chain. Compared to the starry NHL show, the FHL is strictly a balloon-folder struggling to impress Joe Franklin.

In its debut season in the league, Brewster is in last place in the FHL with only three wins so far in the campaign that stretches through early April. The outdoor game was on an undersized ice rink with barely visible blue lines or other markings vital to the playing of a professional hockey game. The Brewster Ice Arena refers to its outdoor facility as “The Pond” and it appears to be a parking lot afterthought of sorts. It’s built into an awkward slope of land with a party pavilion at one end and lots of trip hazards at the other end.

The game started 30 minutes late, and when the sun asked for the check the well-lit rink suddenly stood out dreamlike from a pitch-black background, as if all this minor league hockey obscurity was a guest on Charlie Rose’s talk show. For the Border Wars, wedding-style tents were erected and, like dressing to play the sport itself, “effort” is the key word when it comes to staging professional outdoor hockey. Tent pegs and patio heaters toyed with a few hundred bundled and muffled fans, half of which seemed to be from Danbury. Loyalists manned a decent merchandise tent, and a local barbecue joint sold out of most of their fare offered under an adjacent tent. The Bulldogs’ front office even managed to pull of some promotional stunts during the second period intermission, which again earns them high marks for effort. Look around and see these people are not hothouse flowers. These fans are tough hockey families raised on Zamboni fumes and five a.m. rink times. Masculine and feminine; affluent and working class.

Standing amongst them and their jersey-clad kids in a not-so-comfortable setting I felt like an attendee at some variation of a Promise Keepers Hockey Camp. There were lots of “down in fronts!” and jockeying for spectator position as it was a bring-your-own-chair type of deal, with a few makeshift bleachers stashed in between the tents. The Plexiglas above the boards would move dramatically when struck, and the whole rink had an Angry Birds style creakiness to it. The hockey was good, though. Damn good. Look at most FHL scoresheets and you see lots of goals tallied as most of these dudes have but one gear and that is full-on. The Titans and Bulldogs impressively maintained their concentration despite the conditions, wearing baseball-style eyeblack to cut the floodlight glare. Most seemed to see the puck very well, and the angry men did not fight, and the first penalty wasn’t drawn until 10 minutes in. Danbury, a team with an unfortunate jersey insignia of a giant sword piercing the inside of the letter D that resembles imagery from a Medieval condom wrapper, skated bigger and possessed the puck, for the most part. Both goalies shined through three periods when a 2-2 draw was decided with a shootout after a five-minute three-on-three overtime. The Titans won when Brewster’s towering Russian forward Nicolai Oklobistyn lost an edge while streaking in on Pearless who easily made the save and hung yet another loss on the Bulldogs. Oklobistyn, it might be noted, makes a solid YouTube appearance for his pasting of Dayton Demolition defenseman Tristan Lysko during a rollicking fight in a late November home game.

I watched the Border Wars third period, overtime and shootout along the near boards that have a sidewalk standing area across from the parking lot slope. Huddled under a patio’s heating tower I was shoulder-to-shoulder with the heavily-pierced wife of a Brewster goalie, a few other healthy-scratch players from both teams and some BYOB drunk guys from Connecticut.

The assembled non-playing players had cute nicknames for each guy who entered the shootout. They also complained about not having cars while bivouacked along the I-84 corridor. “There are some movies I’d like to go see,” whined one hoser from Toronto who was also complaining about being moved from center to wing. “All I do now is eat, sleep, and play hockey. I’m from the city. I’m kind of bored.” This might explain why he is spending his off night standing in the cold in the woods outside Brewster, NY.

One of the drunk guys from Connecticut closed the show with this gem while trying to pick up a girl from the Great White North who was also standing under the heater:

Q: Why do Canadian couples like to do it doggy style?

A: So they can both watch the hockey game.