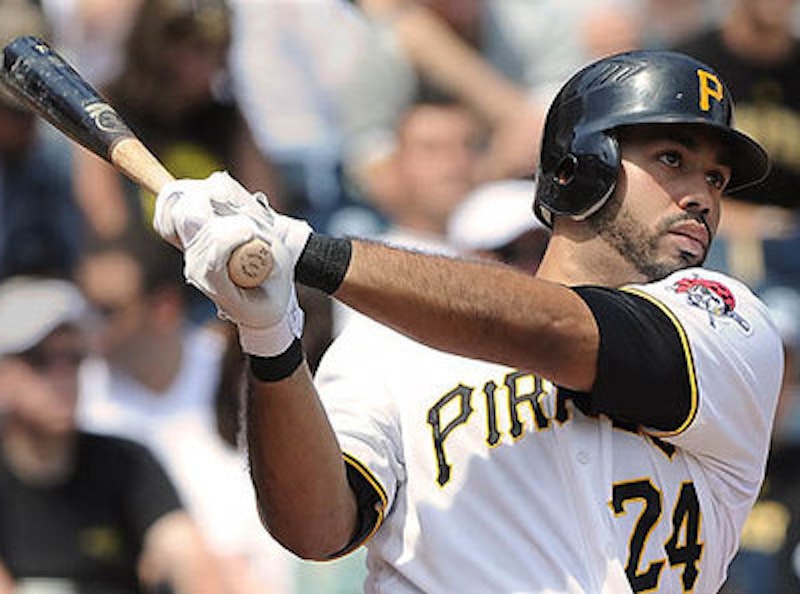 Blame Willie Stargell for any melancholia felt by middle-aged Pirates fans when the news broke that Pedro Alvarez was done with his Pittsburgh baseball career. The announcement came last week when the club “non-tendered” the 2008 first-round draft pick. Just like that, Pedro was gone. The PNC Park door was indeed striking the large posterior of the Dominican kid from New York City as he exited the premises. There goes the one they called El Toro, who helped usher in the Bucco franchise turnaround now in various stages of blossom.

With the Winter Meetings proceeding in Nashville, odds are Alvarez will have new laundry to wear before the Advent Calendars reach double-digits. He’s gone, and I miss him already. I don’t miss his lousy numbers that punched his ticket out of town, but I miss what Pedro represented.

It was indeed Pops Stargell who conditioned me to worship left-handed power hitters wearing the black-and-gold of the Pittsburgh Pirates. Pops was the most likeable Pirate from the 1960s through the end of the 70s. He was a constant Pirates presence except for his odd coaching finish with the Braves. He hoisted two Commissioner’s Trophies (1971 and 1979) with the Bucs, both victories in bad weather at Baltimore. Stargell delivered the goods along with the soundbites and commanded respect from all corners of the game and beyond. A friend had a relative who was a struggling minor league umpire working Spring Training in Florida in the early 70s. He struggled with his confidence, unsure that he could cut the mustard as a pro ump.

One of his first assignments was calling a Pirates exhibition game and he was nervous and shaky. He survived the sun-splashed contest and was in the tiny umpires’ room under the bleachers when there was a postgame knock on the door. He went to open it, and standing there filling the doorframe was Stargell. He played in the game, had his two at-bats, did his jogging in the outfield and put another March day in the books. But Willie realized there was an umpire having issues with his big league debut, so he took the time to seek him out. He brought an ice-cold six pack of beer into the umpire’s room and sat with the rookie arbiter and just talked baseball at a relaxed pace and put him at ease. My friend said the Stargell chat helped his buddy decide to stick with umpiring and make an effort that resulted in a brief big league career. Retired now on a fishing boat in Florida, the former ump occasionally recalls the Stargell beer story and what it meant to him, toasting the big man who wore number 8 for the Battling Buccos.

I’m not saying Pedro Alvarez is anywhere near Hall of Famer Stargell status; in fact he is light years away from Willie’s legendary prowess as a team leader. There will never be an Alvarez beer story or a statue of him on Federal Street outside the greatest ballpark in the United States. But it’s hard to part with those occasions when Pedro would connect on a swing and his contact and finish would remind me of Willie and it was quite stirring and the ball just kept going.

Strange things happened to Pedro as a Pirate. He once fielded a grounder at third and found the cover of the ball had been knocked off and was un-throwable. Twice the webbing on his first baseman’s glove gave way and let the ball go through. He’d been moved to first base from third due to a sudden case of the throwing “yips”—the same curse that put Chuck Knoblauch, Steve Sax, Mackey Sasser and Steve Blass in the headlines for the wrong reasons. Suddenly routine grounders became groaners as Pedro, the son of a Washington Heights car service driver, began sailing his throws into the stands.

He seemed to make up for it, though. Like the time I was sitting behind the Pirates third base dugout at PNC and he pulled a ball down the right field line that arced beautifully with a slight fade at the end and clanged off the foul pole halfway up. The noise sounded like a D-sharp to my untrained ear, but I will never forget having the perfect angle to watch that ball disappear into the night. He also had an adult doppelganger who attended Pirates games regularly wearing his jersey and wristbands, as well as a devoted youngster with a fake Fu Manchu beard and eyeblack known in the stands as Mini-Pedro. Last May, Alvarez homered into a moored boat floating in the Allegheny River beyond the right field stands at PNC. He seemed unfazed by all this, straining to maintain a humorless professionalism befitting his Vanderbilt education.

So Pedro is a free agent now. The official team line was few trade partners could be found for the obvious DH candidate, which is a moot point given that all any GM has to do is wait until the player is non-tendered and simply approach him as a free agent without coughing up an existing player.

Pirates GM Neil Huntington threw a bone to the press with a veiled mea culpa a few days after cutting Pedro loose, stating in so much GM-speak that he’d perhaps called up Pedro too early from the minors. Few were buying that storyline. The Pirates were saving some money and cutting loose a defensive albatross who gave fans many a thrill in his six seasons in the Steel City. So it’s an ugly end for the stocky lad, just as it was an ugly beginning with his delayed “arrival.” Alvarez’s agent is Scott Boras who had a personal vendetta against Pirates brass (in particular team president Frank Coonelly, a former MLB lawyer who fought Boras over a “slot” system to control signing bonus money for draftees). Of course Boras challenged the Pirates down to the final agonizing seconds of signing Pedro to a big league contract by the set deadline. Alvarez survived that initial PR disaster, and then the Horace Mann graduate eventually began to crush baseballs, sharing the NL home run title with Paul Goldschmidt in 2013. The last time a Pirate wearing number 24 hit like that it was Brian Giles, and before that it was a kid named Barry Bonds.

As of this writing Alvarez is unsigned but is certainly destined for some AL squad’s DH slot. Some New Yorkers may remember the time in 2006 when the “Barry Bonds of the Bronx” said no to a $1 million signing offer after being drafted by the Boston Red Sox. He said no because he wanted to get his education at Vanderbilt instead.

The Mariners, Indians and Orioles all expressed some interest in the past week. So Pedro had more errors than career home runs. That could have been worked on, maybe, but he wasn’t showing up for voluntary preseason camps and had opted out of winter ball earlier in his career. At 28, with an infant at home, he’s certainly at a crossroads in his career and Boras is probably crapping bricks into his sterling silver office toilet. If I were Pedro I’d light a candle in front of a Ron Blomberg baseball card. At least as a DH, Pedro won’t have to tuck his ears under his ballcap anymore.