We Could Be Royals

Blue is the color, baseball is the game. 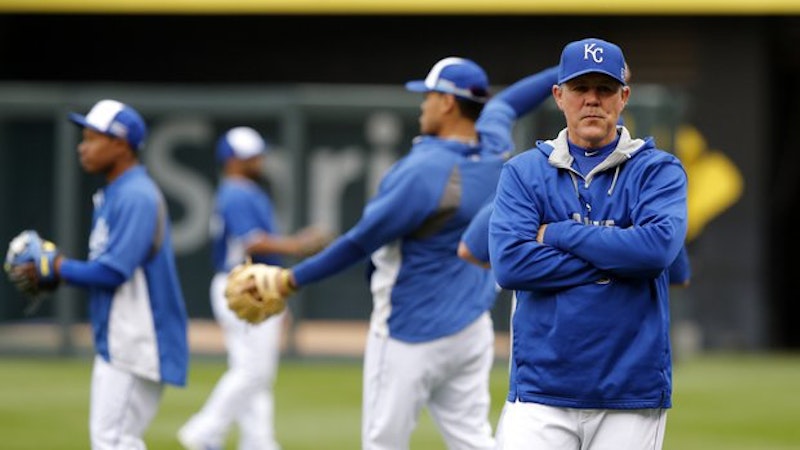 Though I have long detested the American League it’s hard not to root for the Kansas City Royals as the MLB October Madness bracket winds its way to the World Series. I’m sickened by the happenstance perseverance of the St. Louis Cardinals and their boring manager Mike “Hunting Knife” Matheny (put those words in your favorite Internet search engine for a funny aside). I tire of the San Francisco Giants and their saccharine “intensity” (Hunter Pence, redneck psycho Jake Peavy, et al.) Every fall now it's the same drill—having to explain the playoff system to bartenders, great aunts, outsiders, substitute teachers, soccer dads and red-blooded American males who know Tom Brady’s favorite Bible verse and confirmation date.

I remember seeing the Royals in Spring Training at Terry Field in Fort Myers, Fla., circa 1975 or so. My uncle, a retired Army colonel, took me to the park and helped me get autographs not only from Kansas City’s John Mayberry and Freddie Patek but also a very young Omar Moreno of the visiting Pittsburgh Pirates, a team that I still worship to this day. It was a gas, leaving me with a perpetual fondness for the Spring Training ritual that will always revive my soul every time March rolls around.

After the game, we went back to my uncle’s Florida ranch house in Cape Coral where he killed a blacksnake in his tidy garage. He did it swiftly with a shovel. Next door, the kid who played “Hey Mikey!” from the Life cereal commercial was visiting relatives. My uncle had a boat in the canal behind his house. It was called the Mai Pen Rai, a Thai expression which essentially means “no worries.” He was an Army lifer who spent the latter part of his career stationed in Thailand in the early 1960s as an “advisor” in what would eventually become the Vietnam War. That’s where he picked up the name for his boat. Because the Royals were local to Ft. Myers, he enjoyed watching them thrive in the late 1970s in the George Brett era. He did everything with gusto, my Uncle Bud, and I remember sitting in his living room amongst his war relics—a Nazi tank flag taken at the Battle of the Bulge, various carbines on the wall—admiring Moreno’s signature on a game program. It was cooler than the Fonz, who was surging through the shadow point of the pop cultural sundial at the time. It was an O with a straight horizontal line, and an M with a straight horizontal line. Perfection. I would later style my own signature after Omar’s. He was a player who stole lots of bases, which is what the 2014 Kansas City Royals are known for despite the howls of protest from Sabremeticians who morosely declared stolen bases as “overrated” a few summers ago when the stat-heads and analytic types were in vogue.

I’ve have met but a few Royals fans in my travels. One of recent note was a freelance photographer from Kansas City employed by Bard College to shoot the Summerscape musicians who populate the Annandale campus during the height of baseball season. They’d fly him in, put him up in a decent local hotel, and he’d do his job happily. We would talk small-market baseball in the taxi as I drove him to his assignments. We spent more time than any other pair of humans debating the rise and fall of Bob Hamelin or the ill-fated commerce of the Benito Santiago-for-Leo Nunez trade. This guy had a hot girlfriend who would come up from the city to the Hudson Valley to hang with him on weekends. For most baseball junkies it’s rare to envy a Royals fan, but there were a few weekends in August when he was clearly sitting in the catbird seat. I didn’t see him this past summer, but I think of him every time Ned Yost is bashed in the online media, or when Mike Moustakas rakes, or when Eric Hosmer picks up a bar tab.

Even in their later years of Spring Training in Florida, when the Royals were camped at a former Boardwalk and Baseball amusement park outside Orlando, I’d make that park my first stop during the sunburned March sojourns because its Haines City location was so close to the airport. From there I would head west toward Bradenton usually in a convertible rental car so you could smell the orange blossoms just south of Tampa. You could easily catch two games and a minor league camp exercise in one day if you played your airport cards right and knew the Grapefruit League schedules and routes. It was much more challenging pre-Internet, so getting it done was all the more satisfying.

Boardwalk and Baseball closed in 1990 and was a major bust in the shadow of Disney’s brawn. The Royals, like many Florida Spring Training tenants who were astride the east/west geographical fence, pulled up stakes and moved their camp to Arizona in 2003.

But I forgive them. The Angels and their stupid Head and Shoulders commercials are long gone, thanks to these lads in blue. The Tigers and A’s with their big-time deals at the deadline are also playing golf right now. Thank God there were no Yankees and Red Sox this time around, just to stunt the growth of the ESPN promo machines and those who pay attention to market shares and television ratings stats. I think someone used the endless Derek Jeter retirement subplot as a voucher to dismiss the NYC-vs.-Hub uber-rivalry this season. Problem is, the upcoming Big Papi retirement tour might be just as interminable as MLB with the Mariano Rivera/Derek Jeter precedent now must insure its “ambassadors” get the proper send off overkill from each and every corporate property throughout the league.

As for the Baltimore Orioles—their 2014 juggernaut might have been tamped by all the off days after the ALDS sweep of the Tigers. Or perhaps Buck Showalter is doomed to repeat his grimaces and crow’s feet scowls originating with the 1995 Yankees playoff disaster at the Kingdome, when Jack McDowell could not get it done out of the bullpen in extra innings and hitting cyborg Edgar Martinez drove in the wretched Joey Cora and Ken Griffey Jr. with a double. Randy Johnson got the win, and Showalter got the pink slip. The anal-retentive skipper probably still has it, preserved in a Zip Lock bag, in his archive along with crib sheets explaining how each player should wear their stirrup socks and use over-under lacing on their cleats for home games and lattice lacing patterns for the road.

Sorry Buck, God is not always in the details. Sometimes he’s swimming in the fountains at Kauffman Stadium.