An Orioles Fan Works Up Some Hate for the Royals

Baltimore is likely to make short work of K.C. 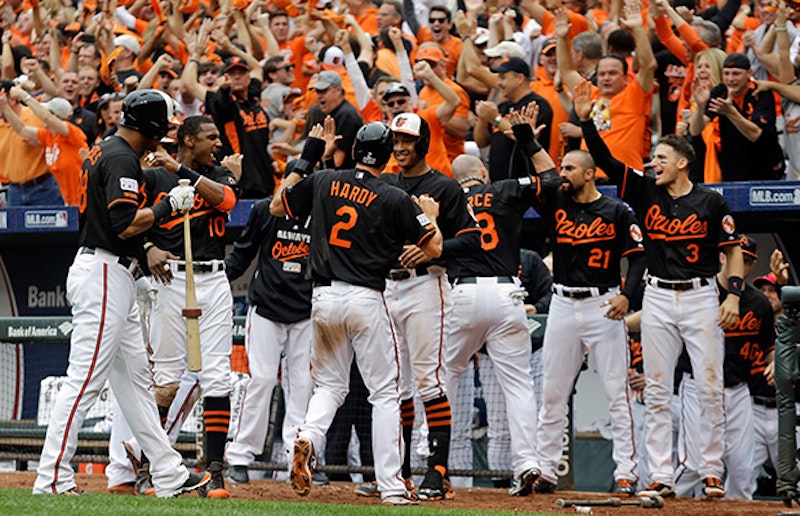 I've been trying to work up a good hate for the Kansas City Royals for the past few days. The Royals are polar opposites of the Orioles in many ways, winning with a power-starved lineup often in spite of their manager. The Orioles have played much of the season without Manny Machado (arguably their best player), while the Royals voluntarily bat Alex Gordon sixth in the lineup day after day. The only thing I can really hate about the Royals is that they're wearing the Cinderella slipper that I had assumed was reserved for the suddenly relevant Orioles.

Honestly, the Royals can have the underdog label. It no longer suits the Orioles. The O’s are a very good team, and have been for the past three seasons. The Royals and Kansas City are the charming upstarts just happy to be here. The Orioles played that role against the Yankees in 2012 when fans were ecstatic to end the club's record run of losing seasons and make an October cameo in the same year. Baltimore's expectations, and team makeup, are much different this time around.

I attended Game One of the 2012 ALDS versus the Yankees. Camden Yards was crazy. The electric atmosphere was more like a massive family reunion for Baltimore's baseball diehards than a playoff baseball game. While I wouldn't trade that experience for anything, the prevailing feeling was a combination of disbelief and relief. We all wanted the Birds to spank the Yankees but deep down there was a feeling of impending dread. The 2012 season was a stepping-stone that ushered the Orioles and their fans in from the MLB wilderness.

I was at Game Two of the 2014 ALDS last Friday against the Tigers and the feeling in the ballpark was markedly different than from that rainy night two years ago. While fans were happy to be there, and not at work on a glorious sunny afternoon, they weren't content. There was an undeniable hunger for more. Spectators tracked Justin Verlander's pitch count in hopes of getting into Detroit's shaky bullpen, there was nary a wave sighting, and the crowd didn't need to be prodded into standing and clapping when a Tigers batter had two strikes. Delmon Young's three-run pinch-hit double was the culmination of an afternoon filled with expectations. We knew the offensive outburst was coming and responded accordingly. The four-run eighth inning kicked off "hug a stranger day" at Camden Yards and the crowd reaction as JJ Hardy slid across the plate with the lead run instantly became my greatest Camden Yards memory.

Two years ago Orioles fans sent their team off to New York hoping they'd return to play another meaningful game. Last Friday the Orioles were sent off to Detroit by an adoring crowd that knew the team would return triumphant.

Good luck to the Royals and their long-suffering fans but over the next week I'll work up a hatred for Alex Gordon, Billy Butler, and the menagerie of 140-pound pinch runners. Believe me, Kansas City, no one knows your pain quite like the Orioles' faithful and that's why I can say, "To Hell with the Royals, Yosting, Big Game James, and Lorenzo Cain's magical glove.”