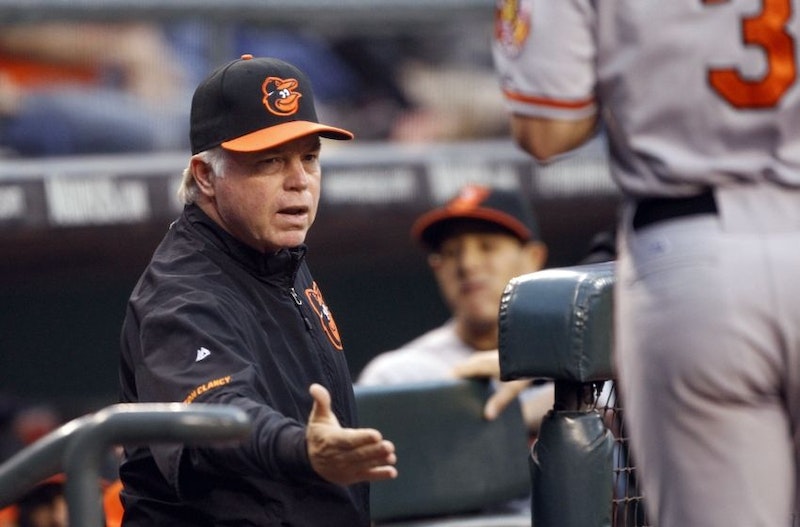 Buck Showalter arrived in Baltimore in August of 2010 as a long awaited baseball savior. He left a lucrative job at ESPN to take over a team that was 41 games below .500 and in the midst of a 14th consecutive losing season. The Orioles were long on despair and short on credibility.

Showalter arrived in Baltimore with a reputation for doing two things quickly; building contenders and wearing out his welcome. Many Baltimore area fans were waiting for the other shoe to drop with Showalter from the start. How could the manager who had micromanaged his way out of New York and Arizona last more than a few seasons under the thumb of the impetuous Peter Angelos?

But instead of wilting under Angelos' heavy-handedness, Showalter pulled off the most difficult task in sports. He changed a losing culture. His trademark penchant for detail, a trait that drew criticism in his previous posts, was just what the Orioles needed. Rather than playing down to expectations, like previous O's skippers, Showalter raised the bar for the entire organization and put his own reputation on the line.

Adam Jones has emerged as the face of the Orioles over the past few seasons and—given MLB's newfound Jeter void—a strong October showing could make him one of the most recognizable stars in the sport. When Showalter arrived Jones was a young player with vast potential on a terrible team. The Orioles were a faceless franchise with no accountability. Showalter assumed the role as the face of the Orioles. He shouldered the pressure, which deflected from his young team.

Showalter rarely shows his hand to the press, clearly preferring to reprimand players in private and praise in public. He’s quick to come to his team's defense over any slight, real, imagined or fabricated for motivational purposes. Showalter can do no wrong in Baltimore.

After years of watching the likes of Dave Trembley and Sam Perlozzo bungle lineups, press conferences, and pitching changes, O’s fans have placed their full faith in Showalter. Other than his odd bromance with slap-hitting infielder Ryan Flaherty, and strange desire to make Tommy Hunter the team's closer, Showalter has given fans little reason to question his tactics. He continues to maximize the output of his team by utilizing the entire 25-man roster and putting players in positions to succeed. Whereas Royals fans seem to take just as much delight in fuming over Ned Yost's curious in-game decisions, Baltimore fans have no such qualms with Showalter.

Showalter came to Baltimore looking like the winner of an Earl Weaver look-alike contest. He was either going to be the guy to right the ship or the latest sucker to fall for Angelos' pitch. At best Showalter, who never lasted more then four seasons in any previous managing job, figured to be back in an air-conditioned studio by the time the 2014 Playoffs rolled around. Now the older Showalter is also new and improved. Based on history he should be packing his office right about now but instead he's preparing his Orioles for a second postseason appearance and comforted by a long-term contract that runs through 2018.