Ty Wigginton Is Perfect for the Phillies

And other free agent prospects. 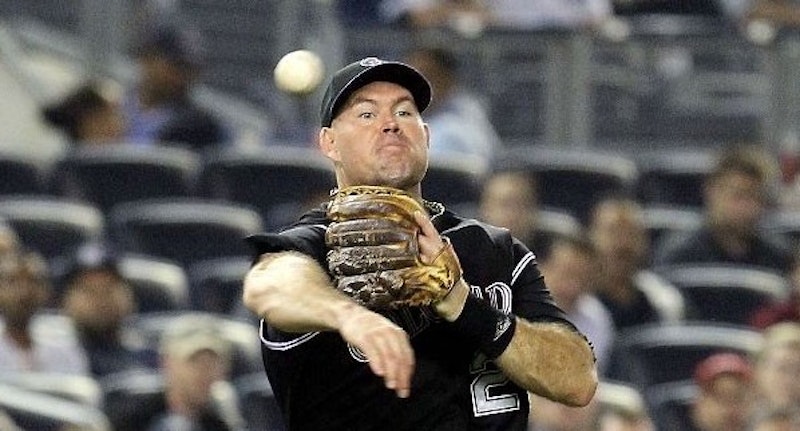 The Philadelphia Phillies acquired Ty Wigginton from the Colorado Rockies on Sunday for a player to be named later. Colorado agreed to pay half of Wigginton’s $4 million salary in 2012. Wigginton, who has experience as an infielder and outfielder, is a perfect fit for the Phillies lineup and payroll.

Phillies GM Ruben Amaro was roundly criticized for the historic deal he gave closer Jonathan Papelbon a few weeks ago. Papelbon’s four-year/$50 million contract is the largest in baseball history for a reliever, surpassing even the great Mariano Rivera. Amaro clearly likes to make big splashes in the offseason, and why not? He has the financial backing to make bold strokes to position Philadelphia as an annual title contender. Papelbon’s deal is a big one, but the Phillies can afford it and it makes them better.

The Phillies were also rumored to have interest in free agent infielder/outfielder Michael Cuddyer, formerly of the Twins. Cuddyer is 32 and is said to be seeking a three-year contract. Cuddyer would make sense for the Phillies from a baseball sense as he can play all over the diamond and would give manager Charlie Manuel the versatility to work through Ryan Howard’s Achilles injury and Chase Utley’s constant stream of ailments. The problem is that Cuddyer would be another thirtysomething on a multi-year mega-dollar contract for Philadelphia.

Amaro has already locked up Howard, Utley, Roy Halladay, Papelbon, and Cliff Lee to high dollar long-term contracts. Adding Cuddyer to that list would be a luxury; a luxury that Amaro clearly thought better of. The acquisition on Wigginton gives the Phillies a similar player for a fraction of the cost. Like Cuddyer, Wigginton can play first, second, third and left field. Cuddyer is widely considered the better player, but they’ve had similar careers; Wigginton has a career OPS of .768 compared to Cuddyer’s .794 mark. Wigginton will count $2 million towards the Phillies payroll next year. He may look like a real bargain if Cuddyer lands a contract for something north of $30 million.

The real winner in the Wigginton deal may be the Phillies’ longtime shortstop Jimmy Rollins, currently a free agent. Amaro likely didn’t have enough payroll flexibility to sign Papelbon and Cuddyer while still swinging a deal to keep Rollins. Bringing Wigginton into the fold at a bargain price could give Amaro the room to make a long-term deal for Rollins a possibility. It will be interesting to track the Rollins negotiations. The three-time All Star will turn 33 later this month and could be looking for a five-year deal. Rollins is the second best free agent shortstop, behind Jose Reyes, and could wait until Reyes signs to make his decision. Amaro has a tendency to act quickly and isn’t shy about overpaying to get the player he wants. My guess is Rollins gets a deal for a little longer and little more from the Phils than he could from any other suitor. After that Amaro can turn his attention towards Cole Hamels, who will be a free agent after 2012.