Redskins Are Playing Out the String

Now how well can they reorganize for next year? 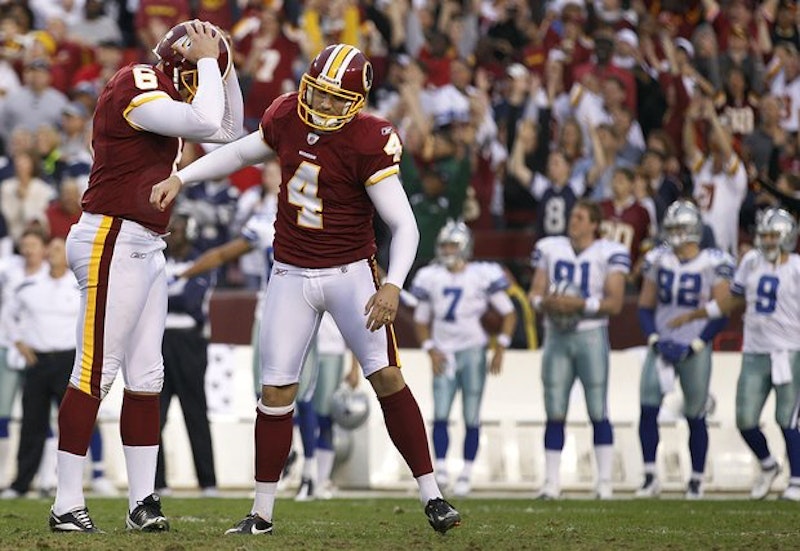 Looking through the fog of another Redskins loss, especially one to bitter rival Dallas Cowboys, can be difficult. But, there are positive if you’re a glass half-full sort of fan. First, at 3-6 going into the game, the Redskins fought into overtime. Even in Washington, a loss to Dallas was the expected outcome, as the Redskins are neither as talented nor as healthy as the Cowboys. But headed into a game that was, at least according to the playoff positioning, likely unimportant for them, the team played hard if not particularly well. Extraordinary effort at this juncture speaks highly of the players and, more to the point, the coaching staff.

Of course, all the highly motivated and perfectly prepared players in the world won’t win anything if they aren’t good enough, and the Redskins aren’t good enough. That’s where this bit of (relatively) good news comes in. At 3-7 the Redskins have the third worst record in all the NFL. If the draft conducted today, Washington would pick somewhere between fifth and eighth depending on which of the NFL’s arcane tie-breaking procedures is in effect this year. A high draft pick, especially in this new era of cheap rookie contracts, means the team can add a highly skilled player for not much money. Adding even one top player can tip the balance and alter the outcome of numerous games. Just ask the Indianapolis Colts.

The Redskins are badly in need of a talent infusion. Last year’s draft brought in a number of decent players, but years of previous bad drafting left the franchise bereft of depth as well as top end talent. Last year’s draft was a cold jug of water to a man wandering in the desert. This year’s draft, if done correctly, could be a Thanksgiving feast.

The Redskins currently hold eight picks in the 2012 NFL draft. That many picks will allow the team to address both specific needs as well as increase overall depth. The higher the team drafts, the more talent will be available to them and the better the overall depth and talent of the roster will be.

For football teams, the NFL season is composed of simple math. First, there is the binary nature of the playoffs: you either make them or you don’t. That is essentially determined by counting to seven. Teams that lose seven games or more don’t make the playoffs the vast majority of the time. The seeding and byes are important in a lesser way, but the difference between the sixth and seventh loss is huge. The Redskins’ loss to the Cowboys on Sunday was their seventh loss of the season. Eleven weeks in, the Redskins’ season is essentially over.

If one of a hundred different plays ended slightly differently on Sunday the outcome could have tipped in the Redskins’ favor. A batted pass here, a quarterback just outside the grasp there, or a missed field goal over here (and there). Any of that could have seen the Redskins celebrating a victory instead of lamenting a sixth straight defeat. The 2011 Redskins are a lost cause. They’ll play out the string, maybe win a game or two more, and then head home. That’s when the team’s brain trust will settle into the all-important task of improving the team, the task the coaches can’t do during the season except on the margins. The more draft picks the team has in its possession, the better the chances are the team’s talent base improves. If those in charge play the draft properly, the team will be back next season with better players and a realistic chance to avoid losing that seventh game.