Hail To The Victors

Michigan’s football program is finally living up to its proud tradition. 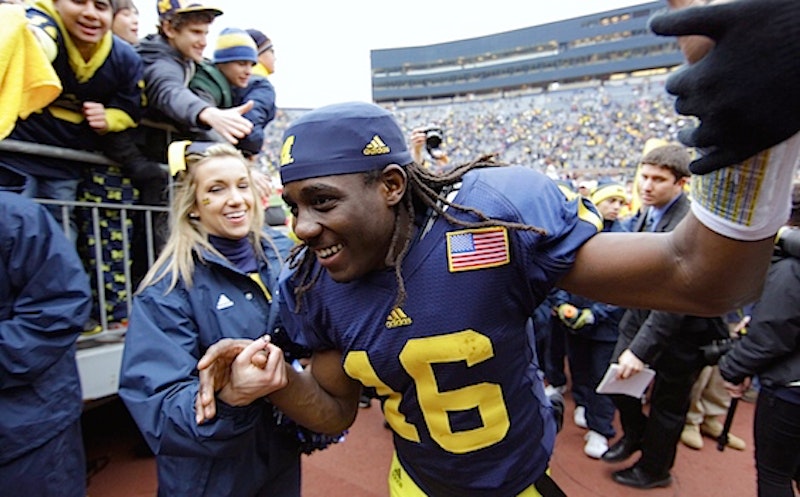 When I was deciding whether or not to enroll at the University of Michigan, I seriously considered if it was worth four years of people pointing out the similarity between my name and that of the beloved head football coach, Lloyd Carr. In the end, I figured Ann Arbor was big enough for the both of us—and really, I can count on one hand the amount of times anyone even brought it up. The only time it was an issue was on football Saturday’s, when shouts of “FUCK YOU LLOYD,” or “LLLLLLLLLLOYYYYD YOU SUUUUUUUUUCK” nearly gave me whiplash every time an epithet was hurled from behind me in the student section. I never quite got used to it. And after four years of losing to Ohio State, the jeers got louder and Coach Carr stepped down just as I was graduating.

I remember being jealous of the incoming students; I’d had four years of Chad Henne and Mike Hart, but also four years of disappointments, losing to Appalachian State (The Horror!), losing to Minnesota, losing in the Rose Bowl, always coming in second to the team down South. They got Rich Rodriguez and his electric spread offense. The guy had turned town Alabama a year earlier, his sparkling 60-26 record compiled at schools with nowhere near the recruiting edge of Michigan. A return to national prominence seemed all but guaranteed.

I won’t recap the free fall that followed, only to say that I don’t believe it was entirely Rich Rodriguez’s fault. I’m still a fan, and I don’t doubt he’ll turn Arizona around. Brady Hoke’s hiring seemed underwhelming, like his only positive quality was being not Rich Rod. He got it, he was a Michigan man; he had the lineage to prove it. He understands tradition, refuses to wear red and just calls OSU, “Ohio.” None of that rhetoric wins football games, and his record as a head coach at San Diego State and Ball State was an unimpressive 48-50. Then he hired defensive coordinator Greg Mattison away from the Baltimore Ravens, and brought in Al Borges, another highly regarded coordinator, to run the offense. Recruiting immediately picked up, the media went from search & destroy mode to full on fellatio. Most miraculously of all, a defense was cobbled together from the exact same players that put together the worst statistical season in Michigan history to form a unit whose statistics eerily resemble the world-crushing defense from 2006, the last time Michigan looked and played like the winningest football team in college football history—though they too collapsed down the stretch.

So naturally, many are calling this a return to form—that this team just feels like Michigan again. The defense is stout, the ground game is prolific. Heck, the running back is rushing for more yards than the quarterback. Order has been restored.

Except I was there, and this wasn’t how it felt in 2006. For the last seven years, since our last victory over Ohio State, we’ve never exceeded expectations and Michigan fans have never truly felt confident. It’s been beaten out of us after playing down to so many opponents, letting teams hang around long enough to embarrass us. Racing out to 5-0 starts, climbing in the polls, only to be exposed. Here’s an incredible statistic:

Michigan's fourth quarter woes from 2000 to 2005 … have been the thing holding it back from truly elite status the last several years. Alarmingly, Michigan entered 18 games over that period of time with a lead smaller than 10 points and went 8-10 in those games. They were under .500 when entering the fourth with a small lead! When tied or facing a similarly small deficit, Michigan was 6-1. In all games in which Michigan trailed by any margin they were 8-8.

Now? We have the most explosive player in college football, Denard Robinson, a quarterback who goes from great to super human in the fourth quarter, a running back emerging as one of the best in the Big Ten, Fitzgerald Toussaint, and the equally well-named big play wide receiver, Junior Hemingway. More than that, we have a defense, courtesy of Greg Mattison’s ability to actually coach up players. His method of slowly introducing concepts and building on base schemes has given the defense enough looks to confuse the quarterback, but not so many as to confuse themselves. It’s been brilliant, and most importantly it still feels like there’s plenty to build on. For the first time since 2006, Michigan is 9-2 heading into The Game, in the drivers seat for a BCS at large bid. For the first time since 2004, the year after their last win over the Buckeyes, the Wolverines are favored to win, 7 ½ point favorites at home to a reeling Ohio State team.

For the first time since I can remember, I actually expect them to win.