As always, it's hit or miss. 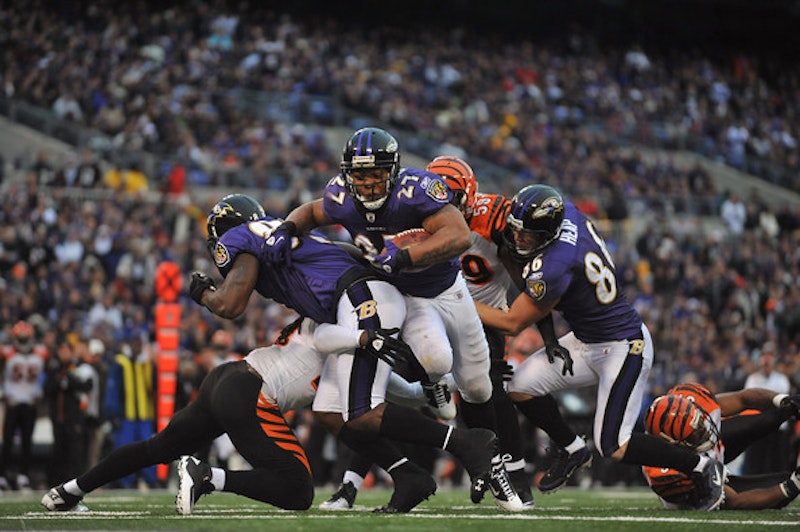 The 2010 NFL season ended on a bitter note for the Baltimore Ravens. I still get nauseous thinking back to that January night when the Ravens blew a 14-point halftime lead against the Steelers. Baltimore turned the ball over three times in the third quarter and let Pittsburgh back into the game. The Ravens clawed their way back but ultimately they failed to overcome their own mistakes.

One of the problems the Ravens had in the playoffs over the past three seasons was the lack of a deep threat in the passing game. The team had a solid core of veteran wideouts that was made even stronger after the acquisitions of Anquan Boldin and TJ Houshmanzadeh. The generally sure-handed Boldin and Houshmanzadeh both dropped critical passes in the playoff loss to Pittsburgh. Boldin dropped a sure touchdown pass. Houshmanzadeh dropped a pass on fourth down in the game's final minute that effectively ended Baltimore's season. Ravens GM Ozzie Newsome went back to the drawing board.

What has emerged this season is a more dynamic Ravens passing attack. At times Offensive Coordinator Cam Cameron has been so enamored with his receiving weapons that he has forgotten about All-Pro running back Ray Rice. In addition to Boldin, and second year tight ends Ed Dickson and Dennis Pitta, the Ravens used their second round pick in the 2011 NFL draft to select wide receiver Torrey Smith from the University of Maryland. Smith was a tremendous talent at Maryland but his receiving performances were inconsistent, due in large part to the Terps’ frustrating quarterback carousel. Many of Smith's most memorable moments as a Terp came in the return game. At 6'1" and 205 pounds Smith gives the Ravens a big target with game changing speed.

Smith's speed has been on display numerous times in the past few weeks. Unfortunately his inconsistency has been on display as well. Smith hauled in the game-winning touchdown with eight seconds on the clock against Pittsburgh three weeks ago.  It was a play that the now departed Houshmanzadeh and Derrick Mason simply wouldn’t have made. Boldin doesn't have the kind of speed to get behind the defense either. In Smith the Ravens have the long ball threat to match the deep ball throwing ability of quarterback Joe Flacco. Two weeks ago, in a stunning defeat in Seattle, Smith and Flacco just missed hooking up on a long touchdown along the right sideline. At first glance it appeared that Flacco simply overthrew Smith by about a yard. Upon review you could see that Smith slowed down for just a split second coming out of his break. That split second likely cost the Ravens a touchdown in a game they ultimately lost by five points.

Smith redeemed himself again last Sunday in a 31-24 defeat of Cincinnati at Baltimore's M&T Bank stadium. The rookie caught a career-high six balls for 165 yards, including a 49-yard touchdown which proved to be the game winner. The highs and lows that Smith and the Ravens have experienced over the past three weeks are par for the course in the NFL. If you stink it up one week you better go make a play the next.

Joe Flacco has received a lot of criticism for his play this season. It's to be expected. When the team wins everyone is great and when they lose the fans look for a scapegoat. Flacco played poorly in losses to Tennessee, Jacksonville and Seattle. His completion percentage is a career low 55 percent after exceeding 60 percent in each of the past three seasons. It's important to keep in mind that the Ravens cut Flacco's longtime security blankets in Derrick Mason and Todd Heap prior to the season. Mason and Heap were each replaced with first time starters in Smith, Dickson and Pitta. Smith and Dickson have both had a number of crucial drops. The inconsistency of Smith and Dickson can be frustrating but they both possess a great deal of talent and make the Ravens a more dynamic offense. The injury to receiver Lee Evans thrust Smith into the starting lineup before he was really ready to handle it. Now as the season enters the home stretch Smith seems to be finding his groove and Flacco is gaining trust in the rookie. Smith's speed and flair for the big play has brought a new dimension to the Ravens’ passing attack. He already has four receptions over 40 yards in just eight career starts. With his job likely on the line Cam Cameron must now strike a productive balance between feeding Ray Rice the ball, hitting Boldin and Dickson in the middle of the field, and taking deep shots down field with Smith.