Alex Anthopoulos Steps To the Plate

Can the Blue Jays contend with their big-money rivals? 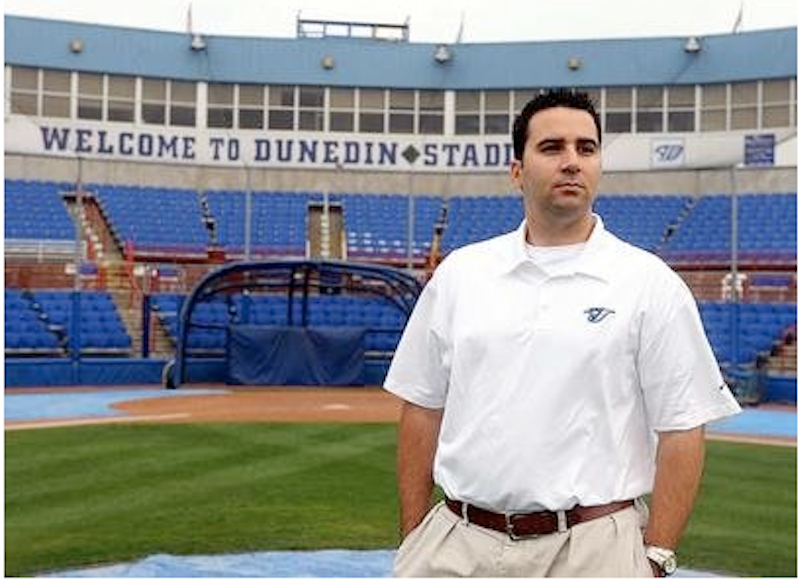 Toronto Blue Jays General Manager Alex Anthopoulos has quickly gained a reputation as one of baseball's best and brightest front office men. The 34-year-old has been on the job just over two years. He took over the GM role following J.P. Ricciardi's rather disastrous tenure which resulted in the Blue Jays handing out some of baseball's worst contracts.

To this point Anthopoulos has spent much of his time undoing Ricciardi's work.  He dealt staff ace Roy Halladay to the Phillies for three prospects following the 2009 season. Last winter he caught the Angels, still reeling from Carl Crawford's deal in Boston, at just the right time and pawned off center fielder Vernon Wells and his albatross contract. It was a tremendous move by Anthopoulos that freed up untold millions for the Jays. The Angels on the other hand suffered through a dismal season from Wells, missed the playoffs, and fired GM Tony Reagins.

Anthopoulos was lauded last summer for the fourteen player deal that brought former Cardinals prospect/headache Colby Rasmus to Toronto. Rasmus has long been considered a tremendous talent but he had personality clashes with the now retired Tony LaRussa and landed in the Cardinals' dog house. Rasmus flopped in Toronto, posting a stat line that would make Cesar Izturis cringe, as he hit just .173 with a .517 OPS. Rasmus is still just 25 and has time to fulfill his promise.

Anthopoulos has done an admirable job in his short time at the helm. He acquired shortstop Yunel Escobar for journeyman Alex Gonzalez during the 2010 season, a move that has worked out terrifically for the Jays. Toronto has finished .500 or better each of the last two seasons but is still the fourth best team in the American League East. The good news is that they have just $41 million committed to players for 2012, a number that will rise as raises are granted through arbitration. Given the amount of payroll cleared over the past few seasons the Blue Jays are expected to be a major player in free agency this offseason. The team has been linked to premium free agents Prince Fielder, David Ortiz, C.J. Wilson and several closers.

This is where the rubber meets the road for Anthopoulos. He's received rave reviews by stat heads and prospect mavens alike for his work in moving dead weight and adding talent to the Blue Jays organization. He also scored a bit of a coup with the hiring of forward thinking John Farrell as the Jay's field manager. The "smartest kids in the room" have accepted Anthopoulos as one of their own, but they'll be the first to tear him down if he missteps in free agency. It will be interesting to see how Anthopoulos approaches the offseason now that he has the financial wherewithal to sign premium talent. Of course, that's exactly what got Ricciardi in trouble in Toronto.

The rumors of interest in free agent closers seems to run counter to Anthopoulos' general philosophy. He should know about the dangers of paying big money for free agent closers as the the Jays did with B.J. Ryan. Prince Fielder would certainly be a huge signing for the Blue Jays but I think it's unlikely that the Jays would feel comfortable agreeing to a deal for $180-200 million on the heels of the Wells fiasco. C.J. Wilson may be a more reasonable expectation with a deal likely in the $80-90 million range. Of course, this is assuming that the Jays can attract free agents to Toronto without vastly overpaying.

Alex Anthopoulos has made a name for himself as a shrewd dealmaker and judge of talent. Now he must find a way to field a competitive team at the big league level without making the bad investments of his predecessor. The Yankees and Red Sox aren't going anywhere, or reducing their payroll anytime soon. The Rays consistently do more with less than anyone else.  The Blue Jays could be on the verge of something big if Anthopoulos can spend his money wisely. If he chooses poorly or acts too aggressively with his newfound payroll flexibility he could set the Jays back several years; and be waylaid by criticism from those who have to this point built up his reputation. If he's too passive he could miss out on a great opportunity to take the Jays from competitive to contender in the meat grinder known as the AL East.